The city as a canvas: Street art festival returns to Waterford

Now in its fifth year, the Waterford Walls celebration of outdoor art keeps on growing. But how does the artform avoid being corporatised? 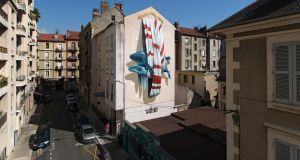 Twenty years ago, street art and graffiti crews were undisputed troublemakers. The public looked on in outrage at signs and tags appearing on derelict buildings, in train stations and tunnels. Today, these graffiti scrawls have morphed into subversive visual spectacles. Art such as the Repeal mural by Maser, the paste up by Joe Caslin during the marriage equality referendum and the emotive portrait of Savita Halappanavar have contributed to Ireland’s fledgling street art scene, bolstering a new appreciation for art in public spaces.

The movement in Ireland has taken a leaf from creative subcultures in cities like New York, London and Paris. Emerging around the 1970s and 1980s, at the time the art was not viewed with intrigue, but as a destruction of public space. What people failed to see, was that the medium was nurturing the voices of politically charged artists who were using art to communicate and add to the city’s cultural ecosystem.

Equally, the walls were a safe haven for those with a political voice to reclaim space, power and belonging in an increasingly homogenised city. “From the artists point of view, it’s probably an urge to communicate strongly and directly, without the limit of time and place, bureaucracy and politics. It could be a little bit like screaming in a crowded square instead of sending 10 handwritten letters: you are sure that your message has been read,” says Nevercrew, a Swiss-based duo, who tackle social issues such as climate change with their larger-than-life murals.

Over time, these intricate art pieces on trains and subway tunnels began to evolve as symbols of protest and discussion. It wasn’t long before these murals, with their power to challenge mainstream discourse, began to pique the interest of the fine-art world, and subsequently corporate advertisers. This led to the art being squeezed into galleries or rebranded as glossy advertising campaigns, sparking a new divide between the arts and the establishment. Today, there is a growing dialogue around what constitutes authentic street art, and how to find a voice as the medium grows in popularity and continues to be commodified and subverted by big brands. Is there a happy middle ground?

In 2014, as Ireland was just cutting its teeth on the international street scene, discussion around authenticity within the movement was bubbling to the surface. At the time, Waterford native Edel Tobin, was hatching a plan that would rise above the endless debate and focus on the art and its potential positive impact on the community. A local school teacher and community activist based in the city, Tobin was interested in using street art to brighten public spaces. It wasn’t until she heard about a transformative street art festival called Djerbahood in the ancient city of Er-riadh in Tunisia, that she started to plan for Waterford’s own reinvigoration through street art.

Djerbahood was the brainchild of French-Tunisian Ben Cheikh, a local gallery owner who decided to bring the city’s decaying walls to life again by inviting more than 100 international street artists paint the city with colour. Cheikh transformed the dilapidated walls into a celebration of outdoor art. No logos, no corporate messaging, just a showcase of democracy and creativity.

Learning about this festival was a tipping point for Tobin. This was a democratic event and a new scene for street artists. It wasn’t hiding in the shadows and it hadn’t been co-opted or branded. It was a chance to paint and be heard, to make a positive contribution to a city, without interference. Tobin saw similarities between Er-Riadh and her home of Waterford city. Waterford had been hit badly by the recession, businesses had suffered and young people had moved on, leaving empty buildings and drab shopfronts behind them.

Five years on, the festival has doubled in size. What started as just 25 artists, has scaled massively to bring more than 50 local and international street artists together every year. “Waterford Walls is now a recognised platform for street artists to share their work. We’re supporting smaller local artists and giving them an opportunity to meet and work with some of the biggest names in international street art. It’s a very different motivation for the artist compared to commissioned projects,” explains Tobin.

“My eagerness to see Waterford thrive spurred me on. Street art is such an interactive art form and I think having free, creative spaces for the public are essential,” says local artist Caoilfhionn Hanton. Novice, a mural artist from Dublin, has taken part in the festival since 2016. “I come for the opportunity to meet and network with other artists. I love the scale of the work and that everyone gets to see and share it.”

Nevercrew was invited to paint for the festival this year and jumped at the opportunity. “We like festivals that take shape within a community, where there’s a direct exchange between the art and people living there. It’s always interesting and challenging to become part of a place, to leave something tangible in it’.

As street art becomes more widely accepted as a mainstream art form, artists now have the opportunity to make a mark and be paid for their work. While some artists still argue that payment for such work goes against the origins of the movement, others try to strike a balance between making their art and making a living. “Money rules the world and if you can use your art to promote something you believe in and earn an income, that’s ideal. I don’t think any artist should have to feel like they’ve sold out if they do this. The creative freedom of pursuing your own projects and the structure of having a commissioned brief works well for me,” says Hanton.

“We keep the brief very broad when accepting applications from artists,” explains Tobin. “We want the artist to feel liberated to make art that feels true to them. Of course, we want to grow, but we want to keep the festival free and open for artists to be able to create and develop their work, so it is vital that any sponsors who do come on board, respect the unique nature of this festival. The sponsors we work with have been with us since 2015, and it’s of fundamental importance to us that the sponsor’s values align with our own.”

Waterford Walls protects the artist’s freedom to paint. It is a democratic, free space for those who want share and learn from others. By positioning this as a community project, in many ways Tobin has hit a sweet spot: local sponsors are willing to support it and artists are provided with an open platform to enliven the community. “It was always the intention to tell stories about Waterford with the city as our canvas. That intention will never change,” says Tobin.