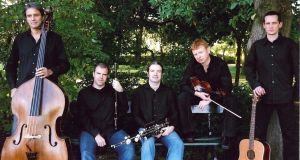 With literally hundreds of musicians owing their start to this vibrant club, there are many who will gladly support it as it struggles with funding. Tonight’s concert features a raft of impeccable musicians and singers including Lúnasa, Máirtín O’Connor, Cathal Hayden & Seamie O’Dowd, Buille with Niall and Caoimhín Vallely and Daoirí Farrell, among others. A stellar line up to brighten the dark days of January.

Individually, these two musicians have been carving their own exceptional paths in traditional music. Piper David Power brings an intriguing mix of refined elegance and cool authority to his chosen instrument, while Tríona Marshall is a harpist who has balanced her contributions to The Chieftains with an impressive body of solo work. At this special lunchtime concert, they collaborate thanks to this year’s Temple Bar Tradfest on a programme where women musicians abound.

Breton harpist and singer, Stivell was in the vanguard of musicians who, from the mid 60s, pioneered a sound that was identified as Celtic, while at the same time, boldly exploring the nascent worlds of ambient music too. His 1970 Celtic harp album, Reflets and the single from it, Broceliande, were hugely successful for him, and established Stivell’s reputation, one that continued to flourish as he boldly married his traditional harp with electric instruments such as guitar and drums. This is Stivell’s first public performance in Ireland in a very long time, thanks to Temple Bar Tradfest.

An auspicious gathering of five internationally renowned and leading exponents of the Anglo Concertina: Tim Collins , Pádraig Rynne , Edel Fox, Caitlín Nic Gabhann and Micheál Ó Raghallaigh. Following their recording debut in 2015, this five-piece ensemble will explore the melodic and percussive boundaries of the concertina, an instrument that’s enjoying a renaissance in recent years.