The best rock and pop music of 2018: A furious revolution

Year in Culture Review: From Janelle Monáe to Cardi B, musicians gave resistance a voice 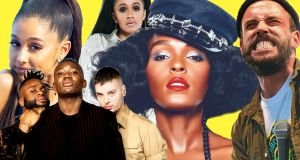 When everything else seems to be going wrong in the world, the music world responded to Brexit, Trump, Me Too, racism and classism with upbeat R&B, therapeutic pop, massive movie soundtracks, rap feuds, understated hip-hop, big comebacks, political statements, brutalist punk, gender-deconstructing artists and distinctly less Ed Sheeran than 2017.

Early on in the year, Janelle Monáe gave us the uptempo, funk-ridden banger Make Me Feel, making us feel that all wasn’t lost. Channelling Prince, who allegedly worked with the singer before his death in 2016, Monáe’s third album, Dirty Computer, released in April, is a sex-positive, anti-establishment, pro-woman, pro-black, pro-queer, joyous piece of work. Not holding back on her artistry, she delivered a 46-minute sci-fi film to complement the album, giving each song the upmarket video treatment it deserves.

In a similar vein, Scottish band Young Fathers used their third album, Cocoa Sugar, released in March, to give a roaring voice to the marginalised. The alternative hip-hop act tackle the dangers of nationalism in a post-Brexit world, leading a furious revolution with their fragmented beats and bellowing vocals.

Bristol punk band Idles are one of the critics’ favourite bands of the year, and their second album Joy as an Act of Resistance – noticing a theme here? – chews on the rotting carcass of modern politics and spits it right out. “I’ll sing at fascists till my head comes off, I am Dennis Skinner’s molotov, I’m lefty, I’m soft, I’m minimum wage job,” sings lead vocalist Joe Talbot on I’m Scum, adding more fire to the fury.

The Black Panther soundtrack, released in February to accompany the blockbuster superhero movie, is curated by Kendrick Lamar and – with the help of some of the best names in hip-hop and R&B, such as Vince Staples, Anderson Paak, SZA, Jorja Smith and Schoolboy Q – it draws similarities from the rebellion of Wakanda to what it’s like to be a black person in the US today.

Although resistance is the fighting theme in some of the best albums this year, singers Ariana Grande, Lily Allen and Robyn use their new releases to soothe the traumas of personal hardships. Grande’s Sweetener arrived just over one year after the Manchester Arena bombings, where 22 people were killed at her concert. It’s a slow-paced R&B-pop album that gives hope and encouragement to anyone who’s hit rock bottom. Its lead single, No Tears Left to Cry, toys around with unconventional rhythms and, paired with the anxiety-riddled Breathin’, Grande uses this album and Thank U, Next, her new single from her forthcoming album, to show that even though she’s been through hell, she’s kept going.

Allen airs out her past on her fourth album, Shame. Covering her drug use, media scrutiny, motherhood and a broken marriage, this honesty landed her a Mercury nomination. Swedish singer Robyn made her big return with Honey, her first album since 2010’s Body Talk, and she also dials it down, using minimal house and electro beats to prove that after all of the torturous heartache of 2010’s Dancing on My Own, life goes on.

With Nicki Minaj and Cardi B deciding to turn their rivalry into a full-on physical fight at the Harper’s Bazaar party during September’s New York Fashion Week, you’d swear that they didn’t have new albums to promote. Oh. Wait. Hang on … Minaj’s Queen shears off any previous pop dalliances as she postures herself as one of rap’s finest. No one is safe as she reads a diss list so heavy on Barbie Dreams that no one should dare cross her, unless you’re the shoe-throwing Cardi B. Invasion of Privacy, the debut album from the New Yorker, is as fun and as charismatic as we wanted it to be. Perfectly bonkers songs such as I Like It show the larger-than-life personality she’s displayed in interviews, but Be Careful shows a softer side to the rapper as she voices her fears of infidelity.

From rap queens to pop queens: Troye Sivan’s Bloom and Christine and the Queens’ Chris are two albums that take the classic gender roles and examine them objectively and subjectively. While Bloom is a sensitive, soul-baring album that delicately unfolds the romance and sexuality that Sivan is experiencing as a queer man, Héloïse Letissier uses retro R&B sounds on Chris to challenge the acceptance of masculinity being immediately associated with strength.

The comeback kids of 2018 are Cher and Mariah Carey. Jockey-backing on the success of her role in Mamma Mia! Here We Go Again, Cher released her own Abba covers album, camping up old classics such as SOS and Gimme! Gimme! Gimme! (A Man After Midnight). Carey’s 15th album, Caution, is a slickly produced album of smooth R&B songs, such as A No No and the Dev Hynes-produced Giving Me Life, that showcase Carey’s verbosity and humour.

And if we thought that Mamma Mia! Here We Go Again would be the only soundtrack to infiltrate our charts this year, we were so, so wrong. The soundtrack for A Star is Born saw Lady Gaga and Bradley Cooper sit at the number one spot on the album charts and and the singles chart with Shallow, edging Gaga ever closer to achieving that all desired Egot (Emmy, Grammy, Oscar and Tony-winning) status. While she doesn’t have an Emmy or a Tony award yet – emphasis on the yet – she already has the Golden Globe locked down for her role in 2015’s American Horror Story: Hotel. If an Oscar doesn’t come her way for her portrayal of the pop star Ally or for co-writing and co-producing the majority of the soundtrack, we’re going to have to have a word with the Academy.

Based on contributions from Louise Bruton, Niall Byrne, Tony Clayton-Lea, Jennifer Gannon, Eamon Sweeney and Dean Van Nguyen, these are combined top fives from The Ticket.