Like her rapping, Hill’s singing voice is an instrument that may never fade 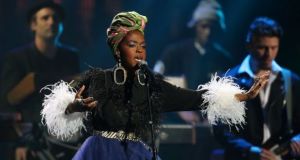 There are a lot of people out there who think everyone in the 3Arena on Friday night is a sucker. We’re all a bunch of poor chuckleheads, airheaded chumps, and silly patsies. We are Homer Simpson, walking through a carnival with a handful of money and a pigeon for a head. They believe this because laying down cash for a Lauryn Hill show has become a leap of faith that even the most dedicated apostle would struggle to find within themselves.

Hill has burned through a lot of goodwill over the years. Her habit of arriving late to shows has become the stuff of lore – after an Atlanta performance in 2016, she blamed a lengthy delay on needing to “align her energy”. She’s known to not show up to gigs at all, and when she does, they’re sometimes plagued with sound issues or the perceived ill treatment of her songs. And so the crowd here is made up of the staunchest of believers. It’s a packed house of fans who are willing to get their fingers torched if just for a chance to see the woman who was once the most exciting artist on the planet.

It’s sad that such warnings have come to colour Hill’s legacy. But it’s been a full 20 years since the release of her first and most recent solo album, The Miseducation of Lauryn Hill, a record that can, without any sense of hyperbole, be described as era-defining. She has since proved to be totally incompatible with the music industry, unable or unwilling to record a follow-up we desperately crave. So a Lauryn Hill arena show in 2018 could only be on the strength of this album. The current tour is pitched as a 20th anniversary celebration of a classic.

Despite all warnings, Hill takes to the stage around 9.55pm – a perfectly reasonable time to kick things off. The 3Arena has seen a lot of crazy setups over the years but the star goes for a simple approach. Mini platforms are set up for some of the band, who are dressed in plain black to fade into the background. Hill perches herself front and centre, multicoloured beanie on her head, leopard skin coat on her back, just a microphone as her weapon – no guitar. The set-up is minimalist. Classic.

From opener Lost Ones, it’s clear as diamond that Hill’s rapping hasn’t lost a step. Ditto on Everything is Everything, which sees the band really rev-up, a lone trumpeter providing the song’s propulsive brass riffs. I don’t mind telling you that at this point I feel my soul stir. We are here to see Ms Lauryn Hill and we are most definitely seeing her. When on Final Hour she puts a little extra emphasis on the lyric “Observe how a queen do”, it’s a spine-tingling revelation.

Like her rapping, Hill’s singing voice is an instrument that may never fade. Doused in red lights, her vocal on the distressing ballad When It Hurts So Bad is the night’s emotional high-point.

Hill’s artistry has always been tethered to her social conscience. As she sings Forgive them Father, a large screen in the background airs clips of police brutality that have motivated the Black Lives Matter movement. On Superstar, the screen features a collage of black music legends, many of which are no longer with us – Nina Simone, Phife Dawg, Bob Marley, Marvin Gaye, Minnie Riperton and more. Gazing at these immortals, I wonder if Hill would one day join that pantheon and what inactivity will do to her legacy. How in two decades could this heroine before us, a warrior with lightning in her veins, not have felt the urge to make more music?

Ex-Factor kicks in. The vocal is disappointingly disjointed as Hill hits every line in a stuttering rhythm, leaving gaps before speeding up her voice to catch up. But it doesn’t matter. This is one of the most relatable break-up songs ever written. Almost everyone here can draw on an experience as they sing along.

Hill opts not to perform Miseducation in its original order and we even get a couple of extra cuts. Her voice flutters, never staying still for a second, on Killing Me Softly, the Roberta Flack number she sang so famously as part of The Fugees. “Spread that vibration of love,” she advises the crowd, one of many sermons delivered between song. “Let it resonate all through you.” When she unleashes The Fugees’ Ready or Not immediately after, the crowd explodes.

The show ends with a version of Drake’s Nice For What, a recent hit built on a sample of Ex-Factor. It’s a surprise to see Hill appear genuinely moved that she’s back in the cultural ether, adding the lyrics: “See this is Ex-Factor/ He took the sample/ My shit is classic/ Here’s an example.” And yet Hill’s star could still eclipse those that have followed her if she decided to insert herself back into their world.

A quick Google search says that Hill is 43-years-old but considering her Earth age feels like asking what age Athena was when she became patroness of Athens, or what age Nina Simone was when she reached her peak. Hill will never be a glossy, perfect performer. She doesn’t need to be. Tonight was a distilled vision of her talent. It was the rubes who bought tickets tonight who won.