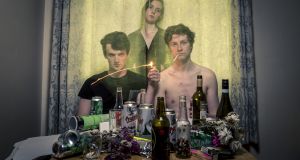 When Lin-Manuel Miranda drew lifeforce from hip-hop to forge his triumphant stage show Hamilton, he sketched out the blueprint for a form of musical that will no doubt turn a galaxy of young theatre writers on to the dramatic validity of beats and rhymes. Enter Fionntán Larney, the 22-year-old Dubliner who has fused theatre pageantry with bristly rapping in his attempt to capture this thing called life with a distinctly hometown accent.

Like a lot of creative works before it, the genesis of Beat, Larney’s debut musical, was a result of college initiative. Studying at the Lir Academy at Trinity, the young actor was tasked with writing a dramatic piece. He toyed with the idea of fusing his love of rap music with theatre. Larney conceived of dialogue not spoke or sung, but spit over funky beats. He eventually scrapped the idea of submitting a hip-hop-based work for education, but the idea continued to rattle around his brain, refusing to dissolve away.

Beat was the result of approximately 18 months of work that began with Larney penning lyrics to instrumentals he found on YouTube. From there, he brought in friends Morgan Beausang and Isaac Jones to help write the music. With Larney in a leading role, Harry Higgins and Martha Breen signed up as additional cast members. The completed project was successfully submitted to Dublin Fringe Festival. Directed by Dominic O’Brien, the young crew performed seven shows in six days in September. In a five-star review for this newspaper, critic Peter Crawley called Beat a “spry, considered and sophisticated work”.

Now, Larney is releasing the show’s soundtrack as standalone album. You’ll be able to absorb his tale via the portal of Spotify, and there’s a music video in the works too. Larney hopes that in bringing the project to new media, he’ll widen its reach.

“We really like the story and feel it’s important,” he tells me at the Science Gallery cafe, a Trinity student haunt. “It’s a story I think people connect with and engage with when they do listen.”

Beat follows the heady tribulations of two young South Dublin men, fuelled by pills and cheap cans of beer, whose views on women, drugs and each other corrode away at their souls. Its most prominent themes are toxic masculinity and mental health – hotbed issues that demand trenchant examination.

“I think there’s a serious conversation to be had about toxic masculinity in Ireland, ” Larney says. “I think some really interesting people are having that conversation. I think the world that men are living in and what a lot of men are identifying with, and pushing away from, is dangerous.”

The Raheny native was particularly keen on tackling these issues in the backdrop of the world he himself orbits. He even made sure to stud the dialogue with his local dialect so it rang with authenticity.

“It wasn’t difficult to get into character or build a world because it’s my world and the characters are similar to people I know,” says Larney. “It was more about having the confidence and just going for it, trying to put that world into rhyme.”

Rap as a discipline doesn’t always command the respect it deserves. Like any skill, it requires work, but, like our species’ greatest ballet dancers or opera singers, the best are blessed with certain amount of natural-born talent. It’s fair to say that Larney and his collaborators aren’t powerhouse emcees right now. Plus, they happen to be dropping a project at a time when Irish rap is enjoying what you could accurately describe as “a moment”. The bar is pretty damn high these days.

Still, Beat as an album sits in its own corner within the Irish rap canon. It’s a sprawling 74-minute odyssey. The orchestration is mostly minimalist in approach, leaning on no-nonsense boom-bap drums, muted keyboard playing and occasional splashes of record scratching and rumbling electronica.

There’s a few differences from the show. Breen, for example, played a number of roles onstage that have have been shared out among different vocalists. But as the lyrics still function as narrative-driven dialogue, Beat’s theatre origins can’t be ignored. Miranda is undoubtedly an influence. You can also hear the step-by-step storytelling of The Streets and movies likes the Sticky Fingaz-directed A Day in the Life, which features actors rapping every line.

Larney and his collaborators will launch the album with a performance at the Workman’s Club on November 27th. For a group used to performing a theatre show to a theatre audience, it will be a strange leap, but they plan on performing a number of the songs from the record, one original cut, and a couple of covers.

“The vibe of the gig will be very different to the vibe of the play,” says Larney. “Even in terms of people not sitting down and standing up. How people engage at a gig is so different. The potential of a gig is really interesting to us because it’s not something we’ve explored too much.”

Moving forward, Larney has, of all things, his graduation to look forward to at the end of the month, and, he hopes, more performances of Beat next year. Into the future, he cites Donald Glover aka Childish Gambino as an inspiration. The writer, rapper and actor has blended all his interests into an enviable body of work.

“What I’m interested in is following a path that isn’t traditional. If you’re an actor you spend a lot of time waiting for the phone to ring. Even if you’re a writer, a lot of that work can sometimes be non-collaborative,” Larney asserts. “I’d love to have a career that isn’t just acting or writing, that goes into the music world.

“I’m really interested in having a career that is diverse and difficult to identify as one thing.”

How Covid has made us doubt our own self-worth