The best jazz gigs of the week ahead 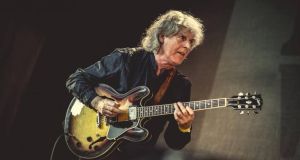 Arthurs, Dublin, 9.30pm, €12, arthurspub.ie
It sounds simple – two singers, one pianist and a book of great songs – but what Flo McSweeney, Carmel McCreagh and Fiachra Trench are doing in their show Love…and all that jazz takes a lot of talent, experience and sheer guts. The winning and admirably eclectic programme ranges from Gershwin and Cole Porter to Joni Mitchell and Tom Waits, and each song is convincingly “owned” by the vocalists and turned into something authentic and emotional. Behind them, Trench’s spare accompaniments are what you would expect of an arranger who has written for Phil Lynott, Paul McCartney, Elvis Costello and many others, and who provided the string arrangement for the Pogues classic Fairytale of New York.

Workman’s Club, Dublin, 7.30pm, €10, facebook.com/dublinjazzcoop
Guitarist Mike Nielsen is one of the most innovative and adventurous of the golden generation of Irish guitarists who emerged in the 1980s, inspired by the great Louis Stewart. An inveterate student of his instrument, Nielsen’s experiments with micro-tonality and odd meters have led him to study Indian music and even to invent his own guitars. He is joined for the latest of the Dublin Jazz Co-Op’s excellent season of concerts in the Workman’s Vintage Room by two of the Dublin’s scenes most forceful rhythm section players, bassist Cormac O’Brien and drummer Shane O’Donovan.

Arthurs, Dublin, 9pm, €10, arthurspub.ie
(also Thursday, Sofa Sessions at Billy Byrne’s, Kilkenny, 9pm, No CC, facebook.com/sofasessionskilkenny)
Guitarist Tommy Halferty’s powerful trio drills down into the sounds of the 70s fusion era, in particular the music of the great drummer Tony Williams’ Lifetime trio with guitarist John McLaughlin and Hammond organist Larry Young. As Halferty enters his own 70s, the ebullient Derry guitarist shows no sign of slowing down – or turning down – and his voluminous trio boasts two of the most sought-after musicians on the Irish scene, multifaceted Belfast keyboardist Scott Flanagan and hard-swinging Dublin drummer Kevin Brady.

Arthurs, Dublin, 9.30pm, €10, arthurspub.ie (also Friday, No Alibis, Belfast; Tuesday 19th, Crane lane, Cork; Wednesday 20th, Black Gate, Galway; Thursday 21st, Sofa Sessions at Billy Byrnes, Kilkenny)
Since he returned from a two decade sojourn in New York to live in Brighton last year, Belfast drummer Darren Beckett has become a more frequent visitor to this island, and for that fans of drumming can be grateful. Whether playing with his own indie band, Ambulance, collaborating with Killers front man Brandon Flowers, touring with jazz diva Madeleine Peyroux, or playing as a side man in numerous jazz groups, Beckett always brings a unique combination of skill and taste to the drum set. He’s back in Ireland this week and next with a trio that features versatile English pianist Oli Howe and one of the Dublin scene’s leading bassists, Dave Redmond.