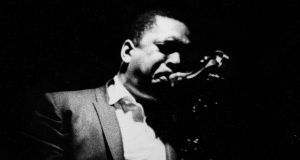 Sonny Rollins, one of the last greats still standing from jazz’s classic period, has said it’s like finding another room in the great pyramid. Later this month, Impulse Records will release a new John Coltrane studio album, 55 years after it was recorded and half a century after the great saxophonist’s death in 1967.

Any release of a lost Coltrane recording would be news, and indeed the saxophonist’s back catalogue of out-takes, bootlegs and radio shots has been mercilessly plundered by his record labels over the years, but the fact that this new release seems to be that most pristine of discoveries – a studio album of original compositions made by the Coltrane quartet in their prime – has set the jazz world salivating.

Entitled Both Directions at Once: The Lost Album, the new release consists of seven tracks, including a version of Coltrane’s iconic Impressions, and three previously unknown Coltrane compositions. Two of the selections don’t even have a title and are simply named for their original studio log numbers.

The recording was made by sound engineer Rudy Van Gelder at his famous studio in Hackensack, New Jersey on March 6th, 1963, and features the band known to posterity as Coltrane’s “classic quartet”, with pianist McCoy Tyner, bassist Jimmy Garrison and drummer Elvin Jones.

It was a group that was then reaching the height of its powers: the very next day, they would return to the same studio and record a classic album with singer Johnny Hartman, and they would return in December of the next year to record one of the indisputable treasures of 20th century music, A Love Supreme.

A stream of the new album’s opening track, a minor blues called Untitled Original 11383, has been circulated by Impulse ahead of the release. After listening to it, Dublin jazz guitarist Chris Guilfoyle told The Irish Times: “It felt kind of surreal. It’s effectively a brand new recording, but it’s from 55 years ago. I would never think someone of my age would get to hear something new by the Coltrane quartet, so it was a pretty special moment.”

Belfast pianist Scott Flanigan was equally affected. “In some ways it’s almost hard to believe that this the same band who produced music as tender and touching as the John Coltrane & Johnny Hartman recorded the following day,” he said. “But in other ways you feel that this ensemble, at this time, had the musical freedom to play however they wanted.”

The album, which is due for worldwide release on June 29th, has been put together with the co-operation of Coltrane’s son, saxophonist Ravi Coltrane, who chose the track order. The cryptic title was suggested by Wayne Shorter, a friend and practice partner of the great saxophonist, who told The Irish Times in an interview in 2014 that Coltrane once said to him that he should play as if he was “starting a sentence in the middle, and then going to the beginning and the end of it at the same time.”