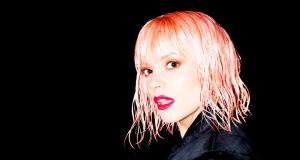 Calling an album No Shame and then laying your personal life bare for the world and its tabloids to pick over is a brave move. On that front, kudos to Lily Allen, who has morphed from soundtracking sunny days to being one of the most Marmite pop stars in existence over the past decade.

Of course, not all of the media attention focused on the 33-year-old has been either within her control or positive – it seems arch-enemy Piers Morgan is constantly at the ready, awaiting her next supposed “misstep” – but in any case, the Londoner’s fourth album is an altogether more fragile, vulnerable collection.

It’s been 12 years since Allen’s debut album, Alright, Still, introduced her as a pop star with enough “don’t give a f**k” attitude for 10 Dua Lipas to contend with, but her fourth record, following on from the bolshy Sheezus (2014), is a different beast altogether.

Here, she discusses her relationship with her children, her marital split and her problems with substance abuse in painstaking (and often heart-rending) detail, making for a difficult listen at the best of times. What You Waiting For is one of several documenting her crumbling marriage, where she admits that she “ran at the first sign of trouble” as a jaunty dancehall soundtrack plays in the background.

The 1970s-style AOR piano balladry of Family Man makes for an especially sobering listen (“You’re better off without me / I am more than selfish, I am tired, I’m helpless”), while the pared-back Apples wallows in regret while drawing comparisons between her own broken home and that of her parents (“You’ve given me my beautiful babies, but it was all too much for me/ Now I’m exactly where I didn’t want to be, like my mummy and daddy/ I guess the apple doesn’t fall far from the tree”).

Perhaps most gut-wrenching of all, however, is Three, a song written from her daughter’s perspective and imploring her mum not to go off on tour yet again: “Please don’t go, stay here with me, it’s not my fault I’m only three.”

With such a confessional lyric sheet you might expect No Shame to be an invariably dour listen, but Allen has not abandoned her pop roots

Then there are the provocative songs that reference the constant tabloid scrutiny she is under without collapsing into self-pity, such as Come on Then (“I’m a bad mother, I’m a bad wife/ You saw it on the socials, you read it online”), while Everything to Feel Something is brazenly and admirably honest as she recounts the lengths she went to to find something that “moves” her in the midst of her crisis.

With such a confessional lyric sheet you might expect No Shame to be an invariably dour listen, but Allen has not abandoned her pop roots. The booming electronic flutter of Come on Then juxtaposes beautifully with its floaty verses; My One and Waste are fist-thumpingly upbeat, while Your Choice draws on reggae-pop for a bouncy carnival vibe despite its lyrical melancholy.

There is room for both defiance and optimism, too, as heard on the cheerful and dry-humoured closing couplet Pushing Up the Daisies – a lighthearted celebration of new love that also finds time to land a potshot at the Daily Mail – and the cheerful, emboldening Cake, with its hopeful affirmation to “Love this life, stand your ground”. Higher and Waste, meanwhile, leave the listener in no doubt about her ability to do the latter, as she counters the audacity of those who tried to undermine her.

No Shame may not be Allen’s most upbeat collection, but it’s certainly an unflinchingly honest snapshot of her life – warts, catchy choruses and all.