The best jazz concerts this week

You have another change to see the legendary Steve Gadd 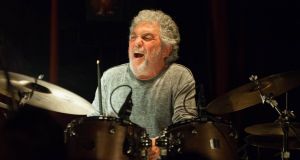 Redoubtable Dublin jazz warriors the Dirty Jazz Club have been packing them in on the first Saturday of the month at Arthurs for a while now and there’s a good reason for that. The talent-rich band - drummer Conor Murray, keyboardist Darragh O’Kelly, bassist Derek Whyte, trumpeter Bill Blackmore, trombonist Colm O’Hara, saxophonist Cathal Roche - have been playing together long enough to find their own way around the music of Miles, Shorter, Zawinul and others. Arrive early.

For those who like their jazz old-school and swinging, guitarist and singer Nigel Mooney’s laid-back sessions in the Georgian splendour of the upstairs salon at the United Arts Club’s are a perfect way to spend a Sunday afternoon. The popular guitarist worships at the altar of Grant Green and Ray Charles, and his talented companions, including silver-touched pianist Johnny Taylor and versatile Mary Coughlan bassist Barry Donohue, know just how to keep the faith. Can I get an amen?

At this stage, saxophonist Michael Blicher and organist Dan Hemmer will be used to most of the attention going to the guy behind the drum kit, legendary US session master Steve Gadd. The 74-year-old New Yorker’s influence on modern drumming is hard to overstate, and it’s unlikely you haven’t heard his playing on record a million times if you’re, y’know, alive.

Having made defining contributions to classic recordings by Steely Dan, Paul Simon, Chick Corea and hundreds more, and still in constant demand, Gadd certainly doesn’t need the money or the exposure, so this feel good soul-jazz trio with his two Danish friends is just the sound the legendary drummer wants to make when he’s left to his own devices. These days, Gadd is only to be heard in big halls and arenas, so these Dublin gigs are a rare opportunity to check out the guy some regard as the world’s greatest drummer in an intimate club atmosphere. Predictably, the first show sold out as soon as it was announced, so promoter Dominic Reilly has put on a second show at to satisfy demand, but expect those tickets to go pretty fast too.

The Irish domestic jazz scene is busier and more diverse than it has ever been, and the Improvised Music Company’s monthly showcase at Arthurs is a chance to check in with what’s happening. This month, guitar fans are well served with three of the country’s finest, in particular Sligo-born guitarist and respected pedagogue Mike Nielsen. Currently Director of Jazz Performance at DIT, Nielsen has been one of the most consistently original voices in Irish jazz for the last three decades, and he has a particular affinity with the guitar duo format.

He teams up here with rising Galway guitarist Aengus Hackett, whose own JazzGate showcase (see below) is winning new audiences west of the Shannon. Also on the bill, and hot on the heels of Duchenne Smile, their excellent debut release, Dubliner Darragh Hennessy’s hard-swinging organ trio features melodic Italian-born guitarist Julien Colarossi and Barcelona drummer Gonzalo Del Val, a master of subtle understatement.

Veteran UK-based Irish pianist John Donegan explores the music of the great Bill Evans – some of the most admired and influential music in jazz history – with a quartet that includes talented Galway saxophonist Matthew Berrill and vastly experienced US-born bassist Dan Bodwell. Donegan also plays a solo concert in Dublin on Sunday at noon (see below).

New York guitarist Jonathan Kreisberg is one of the rising stars of the US scene, a brilliant melodicist with an ear to the past, an eye on the future, and playing credits that include Dr. Lonnie Smith, Lee Konitz and Ari Honenig. The 47-year-old arrives in Dublin for a two night run at Arthurs with his own top flight quartet, including young Cuban-American pianist Martin Bejerano, a member of legendary drummer Roy Haynes’ band, and the senior New York rhythm section of bassist Matt Clohessy and drummer Colin Stranahan.

Irish pianist John Donegan is UK-based these days, but his musical heart is still tuned in to his homeland. His album, Siamsa Vol 1, recorded in France in 2018 and released earlier this year, is a collection of the pianist’s own compositions which blend jazz and Irish traditional flavours, some of which are bound to turn up on the programme for this free lunchtime solo concert in the wonderful acoustic of the Sculpture Gallery at the Hugh Lane gallery. Donegan also plays JazzGate in Galway on Thursday 7th (see above).