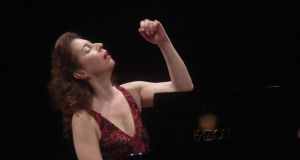 One of the classical music’s most celebrated artists, pianist Angela Hewitt, returns to Ireland to begin a major international project, performing the first of 12 core concerts in her new Bach Odyssey at St Peter’s Church of Ireland, Drogheda, Co Louth, on Thursday, September 22nd.

The odyssey will follow Hewitt as she plays all 141 of the great composer’s solo works for keyboard, including, as the series unfolds, both books of the Well-Tempered Clavier and the Goldberg Variations.

Each of these 12 concerts will generate satellite or multiple recitals. The entire odyssey will take Hewitt four years travelling the world to complete.

The Canadian (58) has a vast repertoire, including works from the classical and romantic periods. Although not a baroque specialist, for her it was somehow, always Bach.

Hewitt once told me that her first teachers were her parents, who started her off on Bach “because his music is the basis of piano technique” . It is an intriguing observation: Bach, the master improviser who spent much of his life as a church cantor in Leipzig, was never to see, never mind play on, a modern piano.

He did criticise the early forte piano in the 1730s. By 1747, he had softened and agreed to help in the sale of one. But his keyboard works were composed for harpsichord and organ. Transcribed for the modern piano, a far more robust instrument than the harpsichord and one of greater individual note resonance than the organ (itself a virtual orchestra), the music achieves a heightened tonal clarity. The piano allows the line of the music to sing as would a violin, an oboe or, indeed, the human voice.

Most of Bach’s keyboard repertoire is secular. Renowned for his glorious sacred choral masterpieces and cantatas, he began his career as a court musician.

Hewitt is an enthusiast. She was not a child prodigy and her approach, which includes writing insightful programme notes, is accessible. She is an emphatic, direct speaker, admits to being terrifyingly organised, and enjoys researching music and the lives of composers.

As a performer she aspires to understanding the music and in turn, to articulating this in playing that is intelligent, sensitive, subtle, understated and alert to idiom.

When she refers to “unravelling” pieces, she sounds like a watchmaker taking a clock apart in order to see how it works: “You have to unravel a piece of music, then think about how to put it together.”

Between 1994 and 2005, Hewitt recorded all of Bach’s major keyboard works in a collection that extends to 18 CDs.

St Peter’s Church, which typifies the elegance of Hugh Darley’s mid-18th century Palladian design, was attacked by an arsonist in 1999. The repair work became a full restoration project, supported by the people of Drogheda.

The then rector, Rev Michael Graham, saw that the beautiful interior, with its late Baroque, unusually secular plasterwork and perfect acoustic was an obvious concert venue.

Drogheda Borough Council bought a Steinway Concert Grand with the help of an Arts Council grant. Hewitt will be playing the Drogheda piano.

Many fine musicians have performed in St Peter’s since the International Music Series began in 2003. Estonian composer, Arvo Pärt’s The Deer’s Cry, based on St Patrick’s Breastplate, had its world premiere there in 2008. The RTÉ Vanburgh Quartet and the Irish Baroque Orchestra are frequent visitors.

Thursday evening’s programme includes Fantasia in C minor, Fifteen Two-part Inventions, Fifteen Three-part Sinfonias, Capriccio on the Departure of his Beloved Brother, BWV 992 and the powerful staple of the organ repertoire, Fantasia and Fugue in A minor.