The best classical performances to see this week

Russian fare and a 90th birthday celebration for Veronica Dunne 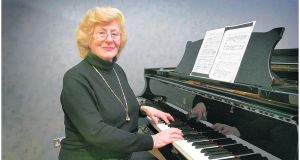 RTÉ CO/Robert Houlihan
NCH, Dublin, 1.05pm, €12, nch.ie
It’s all Russian fare as the RTÉ Concert Orchestra takes over the summer Tuesday lunchtime slot from the RTÉ National Symphony Orchestra at the National Concert Hall. The programme under Robert Houlihan includes one of the zippiest openers (Glinka’s Russlan and Ludmilla Overture) and one of the most atmospheric of tone poems (Borodin’s In the Steppes of Central Asia) as well as some orchestral excerpts from Rimsky-Korsakov’s opera The Snow Maiden, a fairy-tale work that opened the new opera house in Wexford in 2008. Interleaved between these three 19th-century works are pieces from the 20th century, Prokofiev’s Overture on Hebrew Themes (written for Jewish friends in 1919), and Kabalevsky’s easy-on-the-ear 1948 Violin Concerto, with Phoebe White as soloist.

Eoin Fleming (piano)
NCH John Field Room, Dublin, 8pm, €25, nch.ie
Eoin Fleming is a young Dublin pianist who has been hoovering up music awards in recent years. Above and beyond Feis Ceoil successes, he won the €3,000 Fr Frank Maher Classical Music Award in Dublin in 2015 at the age of 17, and the £5,000 Catherine Judge Memorial Award in Belfast last year. You might wonder at the €25 ticket price for a John Field Room concert by someone so young. But the explanation is simple. He’s raising funds to help him continue his studies with John O’Conor at Shenandoah University in Virginia in the United States. He’s playing Beethoven, Rachmaninov, Chopin and Liszt, and if you want to sample his work in advance, you’ll find a 20-minute recital from the First Cliburn International Junior Piano Competition in 2015 on YouTube at here.