Taylor Swift wins album of the year at the Grammys

Taylor Swift takes album of the year at the Grammys, while Adele has technical issues during her performance. Video: Reuters 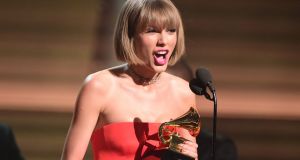 Taylor Swift accepting the award for the Album of the Year onstage during the 58th Annual Grammy music awards in Los Angeles. Photograph: Robyn Beck/AFP/Getty Images

Pop star Taylor Swift has become the first woman to win album of the year twice at the Grammy Awards - and appeared to use the stage to respond to rapper Kanye West’s claims that he made her famous.

A song on West’s new album The Life of Pablo includes lyrics that claim he propelled Swift into the limelight after he upstaged her win at the MTV Video Music Awards in 2009 to claim Beyonce was the rightful winner of her prize.

After her record 1989 was named album of the year at the 58th Grammy Awards in Los Angeles on Monday night, Swift took to the stage with her many collaborators and said: “As the first woman to win album of the year at the Grammys twice, I want to say to all the young women out there: there are going to be people along the way who will try to undercut your success or take credit for your accomplishments or your fame, but if you just focus on the work and don’t let those people sidetrack you, some day when you get where you’re going you will look around and know it was you and the people who love you who put you there, and that will be the greatest feeling in the world.”

Swift also won Grammys for best pop vocal album for 1989 and best music video for Bad Blood, her collaboration with rapper Kendrick Lamar. She first won Album of the Year in 2010 for the album Fearless.

Swift, who scored seven nominations, opened the ceremony with the first TV performance of Out Of The Woods from 1989.

Kendrick bags five
Lamar, who led the nominations with 11 nods, won five Grammys, including best rap album for To Pimp A Butterfly. He scored four awards in the pre-broadcast ceremony, including the best music video Grammy for Bad Blood.

Collecting his gramophone trophy from fellow Compton rapper Ice Cube and his son O’Shea Jackson Jr, Lamar said: “This is for hip hop, Ice Cube, this is for Snoop Dogg, this is for Nas, we will live forever, believe that.”

British singer Ed Sheeran won his first Grammy at the ceremony. Stevie Wonder read from a Braille card as he announced Sheeran’s Thinking Out Loud as song of the year.

Sheeran’s friend Swift, who was also nominated in the category for her hit Blank Space, leapt to her feet and cheered as his name was announced before he ran over to embrace her. Collecting his trophy, Sheeran thanked his parents, saying: “They have flown over the past four years to come to the Grammys, and every time they go: ‘Maybe next year!”’

Wonder tease
Before announcing the winner, Wonder opened the card and showed it to the camera, making a jeering sound and saying: “You can’t read this because you can’t read Braille. I just want to say before saying the winner: we need to make everything accessible to every person with a disability.”

Beyonce presented record of the year, the final award of the night, to Bruno Mars and Mark Ronson for Uptown Funk. Mars seemed to predict his win when he shouted “let’s go Beyonce, let’s do it,” as she paused before announcing the victor.

All About That Bass singer Meghan Trainor burst into tears and embraced her father as she was announced as best new artist by last year’s winner Sam Smith. Accepting the award, she said: “I’m a mess, I have to go cry.”

The evening also featured a string of tributes to artists who have died since the last ceremony.

Bowie tribute
Lady Gaga performed an emotional medley of David Bowie’s hits in tribute to her hero, who died earlier this year.

Wonder, who has won 25 Grammys over his career, was joined by a cappella group Pentatonix for a tribute to Earth, Wind & Fire founder Maurice White, while Eagles musician Glenn Frey, who died last month, was honoured with a special tribute by his bandmates Don Henley, Bernie Leadon, Timothy B Schmit and Joe Walsh and friend Jackson Browne, who performed Take It Easy at the show.

John Legend was joined on stage by Demi Lovato, Tyrese Gibson, Luke Bryan and Meghan Trainor to perform a medley of Lionel Richie’s hits in tribute to the Commodores singer. Richie clearly enjoyed the performances, singing along, cheering and shouting encouragement before he joined the musicians on stage to perform his hit All Night Long.

Johnny Depp, Alice Cooper and Joe Perry’s band The Hollywood Vampires made their television debut, performing a tribute to Motorhead frontman Ian “Lemmy” Kilmister, who died in December. The band were introduced by Foo Fighters star Dave Grohl, who said: “Many of us play rock and roll but a rare few among us are rock and roll. Lemmy Kilmister was rock and roll.

“He was a rebel, an outsider, a one of a kind and a way of life. He was Motorhead. He was a legend and I was proud to call him my friend.

“I have an Ace Of Spades tattoo, but the truth is Lemmy and Motorhead left their mark on me a long time ago, just as they did for everybody who has ever loved rock and roll. As Lemmy taught us in Ace Of Spades, the pleasure is to play.”

The Hollywood Vampires performed an original song before segueing into Ace Of Spades in front of a huge picture of Lemmy.

British superstar Adele was accompanied by just a pianist for her highly anticipated performance of All I Ask from her album 25.

Her performance was plagued by some sound issues early on, but she remained unfazed and ended it with a tribute to Lamar, shouting: “I love you Kendrick, you’re amazing.”  She later tweeted about the sound issues: "The piano mics fell on to the piano strings, that's what the guitar sound was. It made it sound out of tune."

Lamar performed a rousing rendition of his song The Blacker The Berry in chains and a prison uniform in front of a huge bonfire and ended it in front of a map of his home town Compton in Los Angeles.

Justin Bieber, who won his first Grammy for best dance recording for Where Are U Now with Skrillex and Diplo, performed an acoustic version of Love Yourself before throwing his guitar to the floor and running to another stage to perform the award-winning hit with his collaborators.