RTÉ’s orchestra cuts will be seen everywhere, from weddings to schools

When orchestras are silenced, society will feel the loss 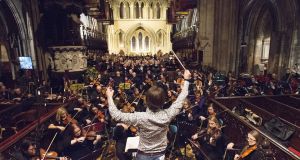 “RTÉ’s orchestras have a singular place in Irish musical heritage,” said the national broadcaster’s head of orchestras, Aodán Ó Dubhghaill, who works for a company that has been shedding orchestral posts for a few years now. Photograph: Dave Meehan

The devil is in the detail. When RTÉ announced its latest review of orchestral services, the man in charge of the RTÉ orchestras, Aodán Ó Dubhghaill, was quoted on the history those orchestras and the importance of orchestral life in European society.  “RTÉ’s orchestras,” he said, “have a singular place in Irish musical heritage and have nurtured, through performance and education, generations of world-class musicians.”

He went on to express his view that “a modern European democracy should protect its classical musicians and artists as a key part of the fabric of our societies and the culture that binds us”.

Ó Dubhghaill works for a company that has been shedding orchestral posts for some years now. Orchestras are like teams in sport. Individuals are not interchangeable, and I don’t just mean that you can’t swap a violinist for a flautist. Change just one key player in any section and an orchestra can sound surprisingly different, just as a football team can be transformed by the arrival or departure of a particularly skilled player.

The situation is bad, so it’s not surprising that Ó Dubhghaill’s next statement was a kind of explanation for the deterioration in RTÉ’s support of its orchestras.

“Through my work with colleagues in the European Broadcasting Union,” he said, “I can see that orchestras across Europe are suffering cuts to their funding, reflecting the threat to public-service media globally.”

Becoming more specific, he raised the issue that “RTÉ’s overall funding position is well known and it is incumbent on RTÉ to consider and assess its role in the provision of orchestral music as it plans for the future”.

In other words, RTÉ is skint and needs to figure out what it’s doing managing orchestras when it has identified more important things making demands on its resources as a national broadcaster.

“In this context,” he went on, “this review will look at what our current and future audiences want, how they will engage with us and how RTÉ’s orchestral music will be heard in venues, on screens and on radio right across the country.” So much for the audience feedback survey that the RTÉ NSO carried out at concerts in September and October.

One of the key messages that Ó Dubhghaill seeks to communicate is that orchestras across Europe are suffering cuts. But the source he cites is “colleagues in the European Broadcasting Union”, rather than orchestra managers in general. His perspective is based on the world of broadcasters rather than the world of orchestras.

Orchestras are part of an ecosystem. They’re where many of the graduates of our music academies and conservatories will look to for employment

There are important differences between the situation in Ireland and in the vast majority of other European countries. Our national broadcaster, RTÉ, has custody of the state’s only full-time orchestras. And both of those orchestras are based in the same city.

Large countries from Germany and France to Spain and Poland have a high level of orchestral provision based in major population centres. It’s not unusual for radio orchestras to coexist with municipal orchestras and yet other orchestras that play for opera and ballet.

The proliferation of regional orchestras around Europe is far greater than most Irish music lovers seem to be aware of. The services they provide and their reputations are local rather than international, and they’re to be found not just in large countries, but also in places as different as the well-heeled Nordic countries and former Eastern bloc countries that are far less well-off than Ireland.

Ó Dubhghaill makes a comparison between pressures on orchestral funding across the membership of the European Broadcasting Union and the parlous state that RTÉ finds itself in. The clear suggestion is that RTÉ’s situation is perfectly normal when viewed in an international context.

But the impact of the kinds of changes that Ó Dubhghaill has communicated to orchestral players (the loss of more than one-fifth of RTÉ’s orchestral musicians) or the destruction spoken of by other managers (the loss of the RTÉ Concert Orchestra) would be of an order unimaginable in most European countries.

Orchestras are part of an ecosystem. They’re where many of the graduates of our music academies and conservatories will look to for employment. They don’t just give concerts, but they also collectively engage in educational work in schools and communities.

Further up the chain, individual musicians teach at the highest level in third-level education, and make themselves available to play smaller-scale new works by Irish composers. To put it another way, the last time you heard a string quartet play at a wedding or a reception, its players probably had some dependence for the honing of their skills on someone who plays in one our orchestras. The loss of an orchestra will be felt far and wide.

RTÉ has already had a number of reviews dealing with its orchestras. The NewERA report from 2014, carried out for the Department of Communications, stated that “in our view further cost-reduction measures would commence with a review of services which could otherwise be provided by the market as opposed to services such as RnaG, Lyric FM or the orchestras”.

Yet RTÉ went on to hire an orchestral consultant, Ed Smith, whose big plan is believed to have been the merging of the RTÉ NSO and RTÉ CO into a single orchestral pool. The ongoing shedding of orchestral posts, some lost through statutory redundancy, creates a threatening new background to the latest review. The goalposts have been shifted. And beyond that, it’s as if, like an EU referendum result that gives the “wrong” outcome, RTÉ is going to keep trying until it gets the answer it wants.