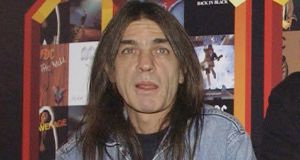 AC/DC co-founder and guitarist Malcolm Young has died aged 64, the band has announced.

In 2014, it was announced that the Scottish-born founding member was suffering from dementia and would not be playing with the band anymore.

A statement on the band’s website said: “Today it is with deep heartfelt sadness that AC/DC has to announce the passing of Malcolm Young.

“Malcolm, along with Angus, was the founder and creator of AC/DC.

“With enormous dedication and commitment he was the driving force behind the band.

“As a guitarist, songwriter and visionary he was a perfectionist and a unique man.

“He always stuck to his guns and did and said exactly what he wanted.

“He took great pride in all that he endeavoured.

“His loyalty to the fans was unsurpassed.

Angus Young added: “As his brother it is hard to express in words what he has meant to me during my life, the bond we had was unique and very special.

“He leaves behind an enormous legacy that will live on forever.

Young was replaced by his nephew Stevie for the band’s last tour promoting the 2014 album Rock Or Bust.

The Fall of the Second Republic review: A fitting portrayal of political disarray
7

Has your phone secretly recorded your conversations? Mine has
9