Royal Irish Academy of Music set for €20m transformation by 2021 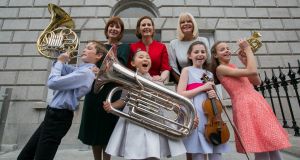 The Royal Irish Academy of Music will almost double student numbers after a €20 million transformation of its Dublin campus on Westland Row, to make Ireland’s longest established music conservatoire fit for purpose.

The academy, which unveiled redevelopment plans on Thursday, has 1,500 school-age students and 150 studying classical performance and composition at third level, with huge demand for places.

After redevelopment, numbers will jump to 3,000 part-timers and 250 at third level, when state-of-the-art facilities for training future generations of musicians reopens in September 2021.

“You can walk up the steps of our Georgian building in Westland Row holding your mum or dad’s hand age four and leave us with a doctorate in music performance 25 years later. Within those two extremes lie about a million stories from those we have been privileged to teach or assess in the last 170 years,” she said.

Behind the historic protected terrace, which will be retained, the existing poor-quality modern extensions will be knocked and a 4,394sq m new build will go back as far as Cumberland Street.

The redesigned campus will include a purpose-built opera studio and rehearsal space; 75 teaching rooms with adjustable, adaptable acoustics; a state-of-the-art library; a sonic arts hub for electronic composition; a 60-seat lecture hall; a music therapy facility; and a more accessible entrance for wheelchair users.

The facilities will allow programmes for disabled musicians and music therapy.

There will also be a new 300-seat concert hall. “We don’t have a Wigmore Hall in Ireland, and we should have,” said John Keogan of Todd Architects, who designed the building. Working on a significant cultural project like this has been “manna from heaven”, he said, because its aspirations are greater than in a commercial project.

At the announcement in the first-floor organ room of the original building, Dubliner Charlotte Croke (11) played piano for the Ministers and assembled guests.

Minister for Culture Josepha Madigan and Minister of State for Higher Education Mary Mitchell O’Connor pledged €9 million in public funding for the project, a built legacy for Creative Ireland 2016-2022.

The project also has significant philanthropic backing, with early donors including Carmel Naughton, Lochlann and Brenda Quinn and Stephen Vernon.

Some 72.5 per cent of funding is in place for the work, which starts with demolition in summer 2019.

Prof Kelleher said she was full of hope for the future of RIAM, where “the conditions for teaching music don’t even come close to reflecting the work that’s going on here”.

The current academy is dark and cramped, with inadequate acoustics and performance space.

The Man Who Killed Don Quixote: Compromised and astonishingly unfinished
3