‘Corners of Dublin are being gentrified all the time. I’m not impressed’ 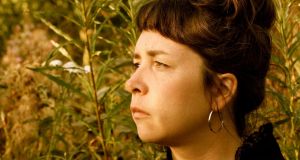 It is notable that, when asked about her formative years, Irish folk musician Lisa O’Neill responds by saying that she accidentally poisoned herself when she was 18 months old by drinking rat poison.

That declaration is not entirely surprising for those who have listened to O’Neill’s haunting, melancholic and deeply affecting folk music. Across three albums – her 2009 debut, Has an Album, her breakthrough 2013’s Same Cloth or Not, and 2016’s Pothole in the Sky – O’Neill has always gravitated towards the unusual. Her subject matter is varied and often surprising. In one track from Pothole in the Sky, called Gormlaith’s Grieving, she sings from the perspective of Brian Boru’s widow. In another song, No Train to Cavan, from Same Cloth or Not, she sings about the lack of a rail service to her home county.

Her style is eclectic, but it is also marked by a profound sense of empathy for experiences that are both personal and foreign. Her new album, Heard a Long Gone Song, follows in that vein. “Safe” is not a word that would spring to mind.

Other than the rat poison incident, O’Neill lists a number of key experiences that have shaped her as a musician. She started playing the tin whistle when she was seven, and she has been told that she started talking “very early.”

After moving to Dublin to study music at Ballyfermot College of Further Education, she started to build a career for herself as a musician, while supporting herself by working in bars and cafes. She stopped working in the service industry nine years ago.

“I started to gig outside of Ireland and people were inviting me to come and play,” she says. “I realised that people were taking me seriously, and that I should take it seriously.”

Inspired by a painting

In the years since, she has built a name for herself as a compelling and unique recording artist. Her new album marks a milestone: she recently signed to a new UK-based record label, River Lea Records, who asked her to make an album of traditional Irish songs. This is how Heard a Long Gone Song was born, a collection of nine songs, on which she says “four and a half” are original, and the others are her renditions of traditional Irish songs.

Where does the half of an original song come from? She describes one of the tracks on the new album, A Year Shy of Three, as half original, and half traditional.

“It started off as a poem,” she explains. “It was inspired by a painting called The Aran Fisherman’s Drowned Child. I was collaborating with the National Gallery on an exhibition by a painter called Frederic William Burton. He was active as a painter during the 1840s, during the Famine. He painted this painting of a toddler that had been found drowned on the beach on the Aran Islands. The father found the child and brought him into the mother. In the painting, you can see the mother holding the child and looking for signs of life.

“I was very moved by it, and wrote the poem from the point of view of the mother,” she continues. “We had a concert in the National Gallery, and the poem had only been written two days before. I didn’t have music that was fitting for it, but Cormac Begley played The May Morning Dew for me, which is traditional. So that’s where I think we really meet half and half.”

It is O’Neill’s storytelling that makes her new record – and all of her music – so captivating. As well as the story about a drowned child, the album also tells the story of Irish woman Violet Gibson, who tried to assassinate Mussolini in 1926. Rock the Machine is about a man working on Dublin’s docklands who is laid off. How does she put herself in the shoes of these people?

While writing Rock the Machine, O’Neill says that she was “very moved” by her research into the laying off of men who worked in Dublin’s docklands.

“They’re real people, with everyday lives, and they’re left with no wage anymore. A lot of these men would have started work down there after finishing primary school so they wouldn’t have had anything else to fall back on. Getting laid off isn’t just about a wage. To have a routine, and to have that pulled from under your feet; it’s the mental state that I would be concerned about in that situation, of a man, or a woman, of anyone who finds themselves without work. I was concerned with that hopeless feeling of trying to replace this hole in our lives.”

In order to write from the perspective of Violet Gibson, or Gormlaith, O’Neill says that there needs to be “a certain amount of fascination.”

“I have to think, how would a woman feel? How would she feel in this situation? I don’t think historians would like me, because often I just mention the name and the place. That’s not out of laziness, that’s out of lack of information. With Violet, she’s more recent and there is more information about her.

“We went to visit her grave in Northampton about two months ago when we were on tour. We planted a sunflower at her grave. She wanted to be in Ireland, and she wanted to be buried in a Catholic graveyard, and that’s not what happened. It was very sad, but it was very moving to go there and to find it,” she says.

Not all of O’Neill’s songs are about historical figures either, and some are personal. In order to write these, she says that there needs to be “nobody in the building”.

“I need to feel like nobody can hear me thinking,” she says. “In that personal writing, usually the music comes with it; it’s like a dance. I’m still fascinated by where the mind goes to, and what works and what doesn’t work.”

One song on the new record, called Blackbird, is personal, but was also inspired by Co Kerry philosopher and poet John Moriarty, who died more than a decade ago. The idea for the song came when she was on a residency in the Sirius Arts Centre in Cobh, Co Cork.

“I was listening to John Moriarty a lot, and he told a story about walking home from a pub one night with an old friend of his, and the old friend was drunk, and he keeps asking John to shorten the road, and John doesn’t understand what he means. And when he sobers up he explains that it means, ‘tell me a story, sing me a song, make this journey shorter, ease it for me’. I really liked that, and in Blackbird I’m suggesting to the bird to shorten my road on a dark day for me.”

She says that it is difficult, in hindsight, to explain exactly where her inspiration for a song comes from. “It mightn’t mean anything to anyone, but it’s not nonsense to me. It’s very clear to me,” she says.

“I often wish I could paint, because [the music] is very visual. I can see the picture, and I can see the verse, and there’s different lighting in each verse. I call them colours and ingredients, but there are also people behind the instruments that are giving us the colours and the ingredients.”

O’Neill has been Dublin based for more than half of her life, but Cavan is inextricably linked to her music. Right now, she is content to stay in Ireland’s capital but the cost of living there as an artist is a concern.

“I’ll stay for another few years and we’ll see,” she says. “For travelling the world, for what we do, Dublin is so unique. Now, it is changing a lot. There are corners of Dublin that are being gentrified all the time, and I’m not impressed with that and it’s sad to see. But that’s what happens, isn’t it? But the pulse of the city, the community of musicians on the traditional scene, is absolutely magic. I just feel so happy to be amongst them, and to be alive and to be playing with them.”

“So Dublin is good for now – very expensive though.”

Portrait of an artist at war: The Burning of the World
9