From the Archive. Memories of Rolling Stones Irish gigs in 1982 and 2007 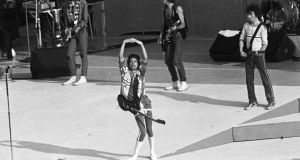 The Rolling Stones have announced a summer 2018 gig in Ireland. Here are some prominent gig-goers’ recall the bands 1982 and 2007 Slane concerts, and the Irish Times reports from the events.

Speaking to the Irish Times in 2007 about the Rolling Stones’s 1982 concert, Slane Castle owner Lord Henry Mount Charles said Ireland had never seen anything like it before.

“The weather was beautiful, the show was magic. Mick Jagger came down the Thursday before the show and had dinner in the castle and the production crew slept in the drawing room of the castle the night before the show. It had an almost gypsy-like quality about it.”

Some 70,000 music fans paid £12 each for a ticket in 1982. Thousands arrived the night before to camp out wherever they could find a pitch around the village. Fans complained of being charged £5 for a six-pack of beer and £1 for a can of Coke, with one newspaper report at the time remarking that “every kind of huckster, three-card-trick man and itinerant salesman had a stall in Slane”.

The day of the concert, July 24th, saw brilliant sunshine, with those who weren’t sprayed by two massive water hoses taking advantage of the lack of security to swim in the River Boyne.

After the warm-up acts, which included the Chieftains, the Rolling Stones bounded on, with Mick Jagger proclaiming: “It’s great to be back in Dublin. After 16 years, it’s very nice of you to come, so let’s spend the night together.” Jagger showed a hazy knowledge of Irish geography and also of the band’s own history. They had last played Ireland in 1965.

In the interminable gaps between the live music they shinned over the 10-foot fence to leap into the Boyne and every mother’s son and daughter of them was decently clothed. Some stripped down to pants, some modestly leaped in fully clothed.

A ferocious, savage, vicious, terrifying gang of Hell’s Angels, from the badlands of Waterford, sat in a reeking huddle on the grass, shunned by 20 yards by the rest of the crowd. Hunched menacingly in their colours, they were eating Choc-Ices.

The crowd got younger all the way into the centre. Half way down were the 20-year-olds, sprawled out on rugs with their wine, in plastic bottles as per instructions, and their dope. The worst crime they committed was to fall sound asleep in the hot sun, and some slept right through the Stones.

Only in the first 10 rows, damped down by fire hoses and at one ecstatic moment sprayed with fire hose by Mick Jagger HIMSELF was there that wild dangerous electric excitement the media associates with huge rock concerts. They leaped and shrieked and held up imploring arms. 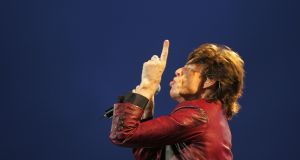 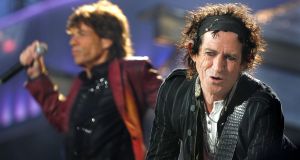 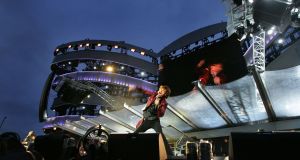 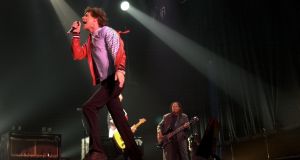 “You’re all right!” Mick Jagger yelled at them. “You’re not too bad yourself!” they shouted back.

“It’s great to be back in Dublin,” Jagger assured them. Nobody had the heart to correct him.

By the last chords of the opening Under My Thumb a steady stream of denim was pouring up the slopes and out the gate. They’d waited 10 hours to see the Rolling Stones, and they’d seen the Rolling Stones; they knew exactly what they were going to play, so they left, perfectly happy.

People kept comparing the Stones concert to the Pope’s visit, but nobody ever left a Papal gig before the Last Blessing.

“Is it a bit much?” Mick Jagger asked while the central section of the massive stage, on which the Rolling Stones stood, levitated away from their backing band and moved through the awestruck crowd.

Excess is a term that has long been associated with the Stones, and their hi-tech, high energy performance seemed to strike the right chord with fans.

Concert goers who had paid some €60 extra for “Gold Circle” tickets, which entitled them to a standing space at front of the stage, most certainly got their money’s worth, as they stood a hair’s breadth away from their idols. Eventually the stage retracted and the show continued as before.

However, for some fans, the moment they stood beside the Rolling Stones will live long in memory.

Mick Jagger remains a remarkably competent frontman, with an impressive swagger, and his banter during the interludes had the crowd hanging on his every word.

He gave fans an obligatory few words “as Gaeilge” and to his credit, and much to the fans’ delight, his diction was spot on.

Another big cheer came when Jagger introduced guitarist Ronnie Wood to the crowd, describing him as a man from Naas, where Wood now has a home. Wood grabbed the microphone from his mate and bellowed “come on the Royals”, to a somewhat mixed reaction.

Dave Fanning spoke to The Irish Times in 2007: “I remember the first Slane, standing backstage and watching Phil Lynott arrive by helicopter. There wasn’t such a big vibe about hanging around the castle – everyone was either in the crowd or backstage.

“1987 was memorable because I was seeing one of my favourite people fail miserably: David Bowie. That was also the year I got my binoculars nicked.

“The Rolling Stones in 1982 was like a great big circus, and the stage had these two big catwalks that spread right out into the crowd like a pair of wings. When Keith Richards walked down one of the catwalks, he was standing just 50 yards from us, and that was cool.

“Bruce was the biggest thing going in 1985, but Slane was the biggest crowd he had played to up till then. Bob Dylan did a solid enough gig in ’84, but he played as if he was in the Baggot.

“Queen was the first Slane where it rained, and there was a bad vibe with the crowd down the front, because there were so many people there.”

BP Fallon spoke to The Irish Times in 2007 about his memories of 1980s Slane: “Dylan was the most memorable one for me – he had a great band which included Mick Taylor (ex-Rolling Stones) and Ian McLagan (ex-Faces).

“The worst Slane was definitely David Bowie – all that Glass Spider rubbish and those dancers. Terrible. I didn’t go to Queen on principle, because they had played in South Africa during the apartheid regime. I saw The Rolling Stones gig, but it wasn’t a patch on the [2007] tour.”