Previous saoithe have included Samuel Beckett, Seamus Heaney and Brian Friel, and Doyle believes that Ireland’s composers are up there with our literary greats 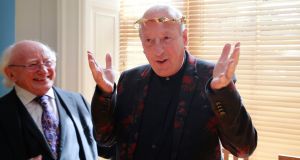 President Michael D Higgins and Roger Doyle at a ceremony honouring the composer as a Saoi in Aosdána, in recognition of outstanding achievement in the arts. Photograph: Nick Bradshaw for The Irish Times

Composer Roger Doyle, a member of Aosdána since 1986, has been been awarded the organisation’s highest honour. He was elected a Saoi earlier this year and formally conferred with the honour on Friday August 16th by President Michael D Higgins.

Discussions of the merits or demerits of Aosdána, or arguments about whether the tax-free cnuas received by many members is an essential stipend or a disgraceful gravy train, rarely touch on the elite of the artistic elite, the Saoithe, of whom there can be no more than seven at any one time.

Saoithe need to be nominated by 15 members of Aosdána and receive the votes of more than half the total membership. Their ranks have included the likes of Samuel Beckett, Seamus Heaney, Brian Friel and Louis Le Brocquy.

They are an elderly group. Apart from Doyle the current members are, in ascending order of seniority, Seóirse Bodley, Edna O’Brien, Camille Souter, Imogen Stuart and George Morrison. The arrival of the 70-year-old Doyle will reduce their average age from 90.6 to 87.2.

Part of BABEL was presented as a dance piece in 1992, when the performance took over an entire wing of Imma

He is also the first ex-rocker to become a Saoi. In his youth he played drums with Supply, Demand and Curve as well as Jazz Therapy. He seems to have got started by placing a small ad in the Evening Press, “Drummer wishes to form jazz group.” And he developed a new income stream after his sister placed an ad in The Irish Times, “Piano lessons given. All grades,” and the nuns from a local convent school got in touch.

But the pattern of his life’s work was laid out for him when he heard his first tape music (“It was strangely familiar. It was what I was looking for.”) and in 1974 he took up a Dutch government scholarship to study electronic music at the Institute of Sonology in Utrecht.

By the time he was 30 he had a number of LPs to his name, and the discography on his website currently lists more than 20 titles. In the 1980s he co-founded the experimental theatre company Operating Theatre with actress Olwen Fouéré, wrote music for films by Bob Quinn (Atlantean and Budawanny), and introduced himself to a wide audience in Steven Berkoff’s production of Wilde’s Salome at the Gate Theatre, playing his incidental music live on stage on piano.

He spent more than 10 years on what he’s called his life’s work, BABEL, an imagined tower city with a multiplicity of musical languages and its own radio station, KBBL. Part of BABEL was presented as a dance piece in 1992, when the performance took over an entire wing of Imma, and the music was issued as a five-CD set in 1999.

When the establishment failed to come up with the kind of outlets he wanted, he created them himself

What sets Doyle apart from others in his generation of composers is not the fact that he’s shown the tenacity to devote many years to individual projects, no matter how tough the going became, or won the recognition of international awards. He was interviewed in this newspaper in 1975, and the feature by Niall Stokes quoted him as saying, “Classical music is isolated and cut off now through the lethargy of those involved in it, and it’s up to the young composer to change that. Most composers are still waiting around for the magic manager to arrange concerts here, recordings there and so on, but it never comes off.”

He railed against the manner in which concerts were presented and marketed and proclaimed an all-embracing view of musical style. As he once wrote, in literary journal The Crane Bag, of his years as a drummer, “Influences were enormous and barriers were crossed effortlessly and without thought.”

When the establishment failed to come up with the kind of outlets he wanted, he created them himself. At one point, in the late 1990s, he banded up with a number of other composers to create Composers’ Ink, an agency that was intended to market its members’ work and help develop their careers.

The kind of self-reliance which has been such a hallmark of his creative life was not unique in the Ireland of the 1970s, when the Association of Young Irish Composers was active, and Jane O’Leary founded her ensemble Concorde. But it only became common much later, as a younger generation matured, with Donnacha Dennehy masterminding Crash Ensemble, Dave Flynn setting up the Young Composers’ Collective (today’s Irish Composers’ Collective), Garrett Sholdice and Benedict Schlepper-Connolly creating the production company Ergodos, and Kirkos Ensemble swinging into gear.

Doyle also comes across as having an unwavering self-confidence and a related perplexity about why the rest of the world doesn’t fully share his own view of his own work. Unusually, and uniquely in my experience, he has the same view of the work of Irish composers as a whole.

I remember when he once complained to me that Irish writers had it so soft by comparison with Irish composers. I gently suggested it might at least be partly to do with the fact that we didn’t have composers on the same high level as our writers. But we do, he insisted. Just to check, I asked if he thought contemporary Irish composers were producing work on the same level as Beckett and Joyce. Yes, he said, they are.

There’s probably never been as eager an advocate for living Irish composers as the latest composer to be elected a Saoi.

From Dukes of Hazzard to Kanye West: The Confederate flag curse
2

Shots in the Dark: A portrait of Britain as a struggling team
10