Reviewing Mahler’s Symphony No 3: ‘I never want it to end’

Diary: For a lifelong Mahler fan, covering this NCH concert is a dream assignment 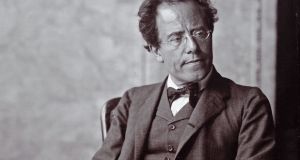 Excellent. I’m on duty in October for Mahler 3. I love Mahler. My father introduced three of us to Mahler’s music at once: my mother, teenaged me, and McGinty. He gave Mum the Second Symphony one Christmas: two LPs, Philips, big-boxed, Haitink conducting the Royal Concertgebouw. We loved it immediately; Mum nearly wore it out.

I would come home from school to find her sitting on the floor, back against the huge wooden stereo cabinet in the livingroom, face all blissful like she had just settled into a Jacuzzi, McGinty beside her, equally happy, extraordinarily rich music filling the room. McGinty always got up and left during the frantic “Day of Judgment” section. McGinty was our black labrador and he just didn’t like the “Day of Judgment” – too apocalyptic.

Dad continued to buy Mahler symphonies for Mum until she had all nine. She’s an expert.

Gigantic symphony for huge forces with lots of brass (including eight French horns and a long solo for posthorn) and much percussion. Plus alto solo, women’s chorus and children’s choir. In six movements: movements two to six composed in the summer of 1895, in a hut in the middle of a field near his summer house; he wrote the first movement a year later. Duration around 90 minutes. Full premiere June 1902.

Something massive and primordial was trying to burst out of him, but he found it hard to articulate exactly what it was. He wrote and rewrote titles for each movement, and started with the overall title The Happy Life – A Midsummer Night’s Dream, pointing out that it had nothing to do with Shakespeare, and then replacing “night” with “noon” – try saying it. Then for a while the overall title was to be The Happy Knowledge, a reference to Nietzsche, and for a long time he felt it had something to do with Pan, god of nature.

In fact, his wife Alma recalls him sprinting back to the house from the hut in what she described as a “Pan-ic” because, he said, he could feel the goat-god watching him. Then he did a U-turn and dropped all titles.

Matthew, Cara, Conor and Zoe from RTÉ Cór na nÓg tell me that their movement is about angels – that in fact they are the angels – and the one after it is about love. I asked who explained this to them and they said, “The Spanish guy who conducts the orchestra.” Singing “bim” and “bam” is easy, as long as you never do the wrong one, but German is really hard. Not all the choir members’ parents will be there: “My mother says it’s for fancy people.”

They are eager. So are veteran trumpeters Graham Hastings and Killyan Bannister. For brass players, Mahler is “the cream of the repertoire, it’s why we’re here,” says Bannister. Mahler 3 “is a great symphony to play,” says Hastings. “A great buzz, and at the end of it you really feel like you’ve achieved something.” He adds that it sometimes takes until 2am before he comes down after a big work like Mahler 3.

No one is daunted by the prospect of a 90-minute, single-work concert with no drinks interval

Their colleague, trumpeter Colm Byrne, will play the lilting off-stage solo for posthorn – literally what German and Austrian postal services traditionally used to signal the approach of the mail. He wrote a college essay about this solo; 10 years later he was performing it. This will be his third time. He explains that you can’t use a real posthorn because it doesn’t have all the notes Mahler wrote. He will fit a large cornet mouthpiece to an E flat trumpet. “The sound has to be much mellower than a trumpet’s.”

The National Concert Hall is really buzzing. People are excited, they know what they’ve come for, no one daunted by the prospect of a 90-minute, single-work concert with no drinks interval. A man was enthusing about his benchmark for Mahler 3: the Royal Concertgebouw at the London Proms. The conductor, Riccardo Chailly, was replaced last-minute by Eliahu Inbal. It clearly left a lasting impression. Pity I couldn’t find him afterwards.

Another man said he was only here because his kid was singing. I asked him whether he was a fancy person. Inside the auditorium it was announced from the stage that this was Jaime Martín’s debut performance as chief conductor with the RTÉ National Symphony Orchestra.

Big pot of coffee, laptop, notes, decide what to say. Famously, Mahler argued with Sibelius that “A symphony must be like the world – it must contain everything”. And Friday night gave us a vibrant performance that sounded like that. Mahler’s instincts seem so unerring as he deploys the commentary of the brass, the colour of the winds, the extra colour of the percussion, the haunting, faraway posthorn solo, the warmth of the strings, whether with energy or in repose, Martín fully in sync with the composer.

If this really is a tribute to Nature, then the arrival of humans was seamless and welcome in the form of soloist Jennifer Johnston, the women’s voices of the RTÉ Philharmonic Choir, and the intense focus, accuracy and character of Mahler’s angels, RTÉ Cór na nÓg.

Last word goes to the youngest one (aged 9) who whispered to the minder sitting beside him in the choir balcony just before the start of the final movement: “Is there more?” She answered yes, and he said, “I never want it to end.”

Anatomy of a killing: ‘Harry pulled the gun out and took aim’
5