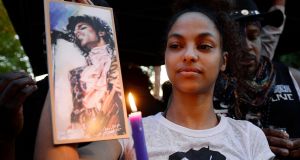 A candlelight vigil in Leimert Park in memory of Prince on Thursday night in Los Angeles. Photograph: Kevork Djansezian/Getty Images

New details emerged on Friday of a medical emergency last week on board Prince’s private jet, which caused his plane to make a sharp, unscheduled descent.

As the world mourns the sudden death of the 57-year-old music superstar, questions surrounding the circumstances have zeroed in on the fact that he may have become gravely ill days earlier, but declined a lengthy stay in hospital.

According to flight records, the plane descended 45,000 feet in 17 minutes to land Moline, Illinois, even though it was just 48 minutes away from the its scheduled destination in Minneapolis.

Quad City International Airport confirmed on Thursday that a private plane made an unscheduled landing at about 1.35am local time on April 15th, and that a person with a medical emergency was rushed by ambulance to a local hospital for treatment.

Less than a week later, on Thursday, Prince was found collapsed in an elevator at his Minnesota estate.

There were no immediate details about the cause of his death, which the coroner said could take days to determine.

Prince, whose full name was Prince Rogers Nelson, had recently cancelled shows in Atlanta because of the flu, but rescheduled the performances for April 15th.

He was on his way home from two consecutive sets at Atlanta’s Fox Theater when his plane was abruptly diverted.

The flight left again for Minneapolis 10 hours after its emergency landing.

The medical examiner’s office said it could take weeks to get results from the autopsy toxicology reports.

As fans searched for answers about Prince’s unexpected death, “the hometown hero” was remembered in Minneapolis where he received an emotional send-off on the night of his death.

Across the city, it was practically non-stop Prince into the following morning. At a bar next to First Avenue, which held an all-night dance party to commemorate Prince’s life, TVs were tuned into music video medleys.

The Dakota Jazz Club, which Prince frequented monthly and attended a show as recently as Tuesday, kept its stage lights dimmed to purple while marking his table with a purple flower and a placard that read: “Rest in peace.”

A smaller crowd was present on Friday at the musician’s Paisley Park home, where a memorial had expanded since the death was confirmed.

Purple flowers and balloons were scattered about signs adorned with brief words from the stream of fans who have continued to arrive.

“We started [listening to him] in college, in ’84, some friends knew him,” said Debbie Rackow (50). “We just started listening to it all the time. It was just great. I love the music.”

As an individual, Ms Rackow said, Prince was always “his own person”.

“He [lived] his life around who he was. He didn’t care what people thought.”

“We’re all too often worried about the way we dressed, the way we look, how fit we are, what other people think, what society thinks,” he said.

Carver County sheriff Jim Olson was set to stage a press conference close to Prince’s home later on Friday to update the public on the investigation into the singer’s death.

According to a transcript of a 911 emergency call that was made at 9.43am on Thursday, an unidentified male caller said he needed an ambulance and that a man was not responding. “Yes, it’s Prince,” he said.

Prince was pronounced dead at the scene at 10.07am.