Olive Smith: A woman at the heart of Irish musical history 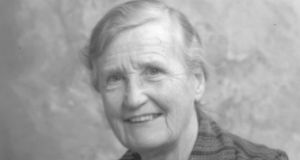 Gillian Smith’s book about her mother, Olive Smith: A Musical Visionary (Somerville Press) is first and foremost a book about a woman with a passion for the well-being of music.

Olive Smith (1906-93) was at the heart of the Music Association of Ireland (MAI), which was founded in 1948 and, four years later, gave birth to Concert & Assembly Hall Ltd, a company whose goal was the delivery of a concert hall for Dublin. Her other major undertaking was the foundation, with the violinist and conductor Hugh Maguire, of the Irish Youth Orchestra, which absorbed her energies after 1970.

The youth orchestra, today’s National Youth Orchestra of Ireland, is still with us. The MAI flagged in the 1980s after the 1981 opening of the National Concert Hall, the failure of the association’s Dublin Festival of 20th-Century Music, which ran from 1969 to 1984, and the ending of the association’s SoundPost magazine, of which I had been editor. The association faltered in a world where the Arts Council had become more concerned with professional delivery than amateur enthusiasm.

Smith’s book is much more than a history of one woman’s involvement with two major musical institutions. It is also a social history of well-heeled, middle-class, Protestant Ireland in the 20th century — the Smiths became a two-car family in the 1950s. And it presents a roll-call of musicians, both local and visiting, whose work was promoted in the heyday of the MAI.

The author’s thoroughness has brought together a myriad of detail that you won’t readily find anywhere else. Smith has trawled through MAI files and is generous in the naming of names when it comes to performers and activists, though there are so many of them that some fly by without any extra background information.

The importance of the MAI is easy to underestimate from a 21st-century perspective. The organisation gave itself the widest brief. As well as lobbying for a concert hall, it organised concert tours around Ireland, presented major commemorative celebrations of Bach (using a harpsichord in the B minor Mass in 1950) and Handel, created a chamber music group, a composers’ group (which in the 1970s merged with the Association of Young Irish Composers to become today’s Association of Irish Composers), and presented schools concerts, one of which I attended myself when I was in secondary school.

The organisation’s energy in its early years, much of it driven by Olive Smith, was quite extraordinary. The book reveals that the hunt for a location for a new concert hall included suggestions for the Rotunda, Blessington Street Basin, the Iveagh Gardens, the site of the former Antient Concert Rooms (and later Academy Cinema) on Pearse Street, the Mansion House, the Royal Hospital, Kilmainham, and sites on Golden Lane, Cuffe Street, Merchant’s Quay, Usher’s Island, High Street, the site of the Ballsbridge Hotel, the Theatre Royal (which was replaced by Hawkins House), the Phoenix Park, part of Beggar’s Bush Barracks on Haddington Road, and Montrose House (where a venue with seating for 1,500-2,000 was envisaged on a three-acre corner of the site that became the headquarters of RTÉ).

There’s even mention of an entirely separate plan by the Catholic Archbishop of Dublin, John Charles McQuaid, to build a hall for Our Lady’s Choral Society on Waterford Street in Monto, a site that would later be built over to become today’s Champions Avenue.

Smith is a very circumspect writer and presents herself as documenter rather than interpreter of what she writes about. That makes her personal view on one of the concert hall project’s near misses all the more interesting.

The year was 1955 and the MAI was pushing site opportunities on multiple fronts. A letter in June from Leon Ó Broin, then secretary of the department of posts and telegraphs (today’s Department of Communications), inquired about the MAI’s response to his offer of the Montrose site.

Ó Broin was concerned about newspaper coverage of the MAI’s interest in a High Street site (which would have necessitated Dublin Corporation committing to purchase property to make the site large enough) at a time when the association had not formally replied to his Montrose offer.

His letter went unanswered for five weeks. Smith sees this in hindsight as “a major calamity”. She writes: “The opportunity to build a purpose-built hall on a ‘greenfield’ site was lost, also the chance to provide a permanent home for the RÉSO [today’s RTÉ NSO] on the same campus as the rest of the broadcasting services.” In fairness, it has to be said, the Montrose site would not become the home of the national broadcaster for another six years.

MAI activist and composer Brian Boydell was on the Arts Council in January 1964 when the council’s recommendation for a John F Kennedy memorial concert hall was accepted by the Government and in March, Raymond McGrath was chosen to design it.

“On 16 September 1964,” writes Smith, “my mother spoke with Raymond McGrath, who told her that he thought the plans would not be ready to go to tender for another 12 months, and that building would not commence until 1967 and might take three years.” It was in 1967 that Concert & Assembly Hall Ltd’s assets were handed over to the MAI. They amounted to just over IR£2,478 (€3,146).

Olive Smith was not a fan of the 1970s renovation project that brought the current National Concert Hall into being. How ironic she would surely have found it that a totally new concert hall planned for Earlsfort Terrace in the noughties was killed off in the wake of the financial crisis of the time, and yet another renovation is to take its place.

There won’t be many people of any age who won’t learn a lot about Irish musical history from reading this book.