John Reynolds? ‘The ballsiest person I ever met. A maverick’ 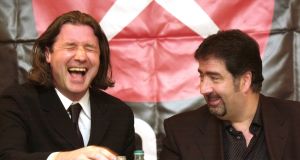 John Reynolds’s death at 52 has been met with disbelief in the music business and among his circle of friends, colleagues and acquaintances.

It’s hard for many to believe that there will be no more comebacks from the man who picked himself up time and again, often in the face of what looked like financial impossibility.

There’s only room for a few omnipresent major characters to populate the club, gig and festival scenes, and Reynolds was one of those.

Reynolds was not the guy in the middle of the dancefloor. He did not have a public socialite persona to contrast the private one. He was not seen hanging out with a crew in whichever restaurant or bar was hot at the time.

Those who worked with him speak of a fiercely private man. The world of clubs and music promoting is a contact sport where run-ins and fallings out are inevitable. Reynolds, like many others, had his fair share.

But he created a club – Pod – that had a significant impact on people’s lives, and a festival – Electric Picnic – that altered the landscape of gigs-in-a-field in Ireland.

Given the economics of the capital now, it’s hard to imagine another lone figure being able to emerge as he did, take the risks he did, and create what he did.

Where can his impact be seen? Take your pick. The countless boutique festivals that followed in the wake of Electric Picnic. Bodytonic, whose first large club show was Derrick Carter at the Red Box in 2003. Thisispopbaby, who took their vision of a crossover of theatre and clubbing into a tent in Electric Picnic.

Any gay night worth its salt follows the lineage of HAM and Powderbubble – both of which happened in the Pod complex on Harcourt Street.

There’s Body&Soul, which started as an area within Electric Picnic and gave the festival its texture. Who can count the number of DJs, promoters, bands and crews Reynolds facilitated, owed money to, gave a home to, or simply allowed them to run with an idea?

David McWilliams knew John Reynolds since 1985 when they were in college together at Trinity. Reynolds went to Glasgow in the late 1980s to work behind the bar in a club. McWilliams was surprised Reynolds chose to go to Glasgow over London, but Reynolds felt there was something going on in that town.

When he returned, he announced to McWilliams: “I’m going to open a big club.” McWilliams says Reynolds was “one of the most creative people I ever met”.

He opened POD in 1993. It’s impact on Dublin nightlife cannot be understated. Rory O’Neill, aka Panti, was part of a crew who began talking to Reynolds about a gay night when Reynolds was building Red Box in the same complex.

“He said: ‘You can do all the Fridays if first you put on an event in the new venue I’m building.’ He was building Red Box as a live venue, but he wanted to know if it would work as a DJ venue. We put on what was the first Powderbubble when the place was still not even totally finished. Wet paint and the toilets not fully done and all that. So that proved you could do DJ nights in there.

O’Neill and co. ran HAM on Friday nights for eight years, and Powderbubble for over a year. “My memory of all of those things is that he didn’t quite get it,” O’Neill says, “but he understood that him not getting it didn’t matter.”

It’s that facilitatory mode that allowed Reynolds’s endeavours to become incubators for many things. “He knew Kinky Malinki [a club night that began in London] which was his first exposure to that crazed dressing up, queers getting together kind of thing,” O’Neill says,

“He used to reference that when we’d try to do various crazy things, like try to bring a donkey into the club at Christmas. My memory of him is that he was a bit indulgent [of us], just trusting us to do it. But it would also drive him mad, because we would be destroying the venues, going around with a staple gun, or putting gaffer tape on lights and forgetting to take it off and it would all melt. We were always destroying the beautiful things he built.”

Lindsey Holmes, of Lindsey Holmes PR, began working with Reynolds in 1999 when Reynolds brought the dance music festival Homelands to Mosney in Meath. “He was harnessing the popularity of the dance scene at the time, and he brought it to much a bigger venue. He did that in conjunction with Mean Fiddler. That was an eye-opener for Ireland.

“A lot of the stuff he did was the first of a kind for Ireland – not necessarily for Europe, there were dance festivals in the UK.”

A few years later, Reynolds had a bigger idea. This time, he wanted to bring a slice of Glastonbury to the Irish midlands. Holmes recalls meeting in Reynolds’s office, crowded with cardboard boxes, to discuss his vision for Electric Picnic, which began as a one-day event in 2004.

“He said stuff like ‘no cheap hamburgers, proper food.’ He talked about bespoke tents and all that. We came out of the meeting really excited. And the first Picnic was astonishing. It was a really hot day and I remember begging journalists to go, because if people didn’t see it or experience it, you’d never get traction on it.

“It was horrendously disorganised, of course. We were running around like headless chickens. But we survived, and it went on from there.”

Along with Oxegen – MCD’s massive music festival with superstar lineups – Electric Picnic grew to typify the Irish summer for music fans. Oxegen was all about big stages, big names, and few frills. The Picnic couldn’t compete on that level, and introduced the term “boutique” into Irish festival lexicon.

Even as Reynolds’s profile grew, few would get to know the real man. “He was a very private person,” Holmes says, “I don’t think I ever got to know him even though I worked with him for so many years. We had a bit of a laugh sometimes, but he always held a bit back.

“He was quite aloof, yet involved. That sounds like a strange thing to say, but what I mean is that he would know how many toilet rolls went into the Portaloos, yet he didn’t connect with a lot of people emotionally.”

In the early 2000s, McWilliams and Naoise Nunn started Leviathan – an unlikely idea of live chats about politics, economics and current affairs. Reynolds suggested Crawdaddy as a home, a small live venue which was part of Pod. The club was refurbished to accommodate more live music, coinciding with a rebirth of indie discos, the growth of electroclash, and the dawn of new-rave.

Another venue, Tripod, was built at the back of Pod, becoming one of the finest mid-sized venues in the country. Reynolds extended the invitation to Leviathan for the first Electric Picnic, a gamble that paid off as Leviathan evolved into the Mindfield area of the festival, ensuring a steady stream of journalists, politicians, and broadcasters landing at the Stradbally site, something that increased the (probably disproportionate, let’s face it) media coverage of the festival.

“He was wedded to the gig,” McWilliams said, “He worked all the time. When he’d come into a room he would light it up with mad ideas and crazy stories, yarns. He was really good fun. When someone is electric when they come into a room, it’s not just charisma, it’s something else; curiosity, relentlessness.

“He was afraid of nobody. He had enormous courage. That is something you don’t see that often. In terms of his enigmatic personality, he understood that if you are the person upon whom everybody depends, you cannot show emotion. That’s not to say he wasn’t terribly stressed at times.”

“Enigmatic” is the word that emerges again and again. The contradiction of Reynolds lies in how he invested so much time and passion in creating spaces for people to socialise, yet always seemed to stand on the sidelines.

“I mean, I worked with him intensely for 10 years, and then there was also the thisispopbaby tent at Electric Picnic, and yet I never would have even dreamt of saying ‘let’s go for a drink’,” O’Neill says, “But what made Electric Picnic what it was, was that he thought about things like ‘sure we’ll get ‘popbaby to do a tent.’ He encouraged all that stuff.

“No other Irish festival encouraged that stuff before. That’s what separated it out from other festivals. John didn’t know anything about queers and drag queens, but he was like ‘it’s fun and different, have a big tent.’ He let people do their thing. It’s very Madonna: to recognise people who are good at what they do and let them do what they’re good at, while having an eye over everything. John Reynolds understood that kind of idea.”

McWilliams played soccer with Reynolds until recently. On Monday, McWilliams texted his friend to invite him to his upcoming book launch. Reynolds didn’t reply, something McWilliams put down to Metropolis happening this weekend. “I thought ‘he’s up to his eyes’.”

Reynolds’ professional losses were tough. Pod closed. He lost control of the Picnic to his rivals. “He loved the Picnic,” McWilliams said, recalling one Saturday morning at the festival where he was a bit concerned for his friend, “John didn’t drink or smoke. He didn’t party. I looked at him and I said, ‘are you ok?’ There was some sort of torrential gale the previous night, he was hoping one of the tents wouldn’t fall down. I was saying ‘it’s fantastic’, he said ‘yeah it is’.

“And I asked ‘how’s it going, financially?’ He just said, ‘I don’t even want it to make money. I want every single cent to go back into the gig.’”

Pod and the Picnic were central, but there was a lot more: Market Bar, the Button Factory, Spy, Bellinter House, Garden Party, Midlands Festival, Some Days Never End, Metropolis, All Together Now, the Kilmainham shows.

“John survived on the adrenaline of his creativity and sometimes it was his downfall as well,” Holmes says, “Maybe he wasn’t always as practical as he could be. He approached things from a creative perspective. That may have been his weak link, but you can’t be everything. John would make things beautiful but maybe not as financially successful.”

Like many people, McWilliams is thrown by Reynolds’ death, but unlike many, he offers an insight into Reynolds’ emotional interior, “He understood that life is full of people whose ideas for kicks and fun is different to yours,” McWilliams says. “He was never censorious about anything. He used to say ‘let them do whatever they want’. Deep down he was a proper Irish liberal who actually believed ‘live and let live’.”

In November of 2015, McWilliams and Reynolds lost a close mutual friend. At the graveyard, Reynolds became philosophical, “You’ve no idea,” he told McWilliams, about when one’s course has run, “so you’ve just got to go for it.”