Carole King: ‘I want to take us away from the terrible direction America is going in’

The songwriter has emerged from semi-retirement to rewrite some of her songs in the age of Trump. ‘I’m the honest opposition’ 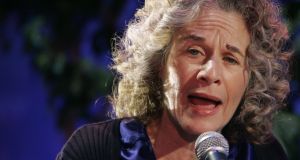 Carole King on Trump: “I don’t even like using his name.” Photograph: Richard Drew/AP

At her home in rural Idaho, Carole King is having some difficulty saying the president’s name. “Trump,” she manages eventually, her accent still pure Brooklyn half a century after she left New York and became the biggest-selling female solo artist of the early 1970s. “I don’t even like using his name,” she says. “Let’s not use his name. Let’s just say ‘the leader of my country’ instead.”

King keeps a low media profile that speaks more of a self-effacing personality than suspicion or reclusiveness. As reviews of her 2012 autobiography, A Natural Woman, pointed out, she has a tendency to play down her vast success, barely mentioning in the book that her 1971 album Tapestry sold 25m copies, and summarising the astonishing run of 1960s hits she wrote with her then-husband, the late Gerry Goffin – The Loco-Motion, Will You Still Love Me Tomorrow?, Up on the Roof, (You Make Me Feel Like) A Natural Woman – with the line: “We continued to write enough songs to pay our mortgage.”

She is giving an interview because she has a new song to promote. Or rather, “a variation of an old song”. She has rewritten the final verse of One – the closing track from 1977’s Simple Things, the last of her big-selling 1970s albums – in the hope of galvanising people to the polls in the US’s forthcoming midterm elections.

The original’s vaguely hippy-ish lines about being “part of the energy it takes to serve each other” are now sharpened into calls to “come together as one/ Show them how it’s done/ At the end of the day, we’ll be able to say: ‘Love won’”.

Strident or not, old or new, the fact that King has been recording comes as a surprise. Now 76, she has long toyed with retirement. In 2010, she said that her tour with fellow singer-songwriter James Taylor was “a lovely way to go out”, before changing her mind, releasing a Grammy-nominated Christmas album and performing Tapestry in full at an acclaimed show in London in 2016.

Even 18 months ago, she told an interviewer that she was no longer interested in writing songs. Indeed, she says she has spent recent years concentrating on a novel.

“It’s the same thing that sends the music through me – it came through me in You’ve Got a Friend, comes through me in every song I write. I can feel it now, it’s the same energy, but apparently it wants me to write a novel, so I’m writing a novel.”

But she doesn’t discount the idea of writing songs again, as long as she has the motivation. Certainly, when the idea of rewriting One presented itself – initially to perform as the opening act at “a women’s power luncheon” for nine female candidates for the US House of Representatives – she was drawn to the piano “like pins to a magnet”.

“I don’t choose to turn [songwriting] off,” she says. “It just wasn’t coming. I felt like I had nothing new to say.” With this event, she realised she did. “I basically already said it in the song once, but some of it wasn’t relevant to the situation today. I wanted to add power to the ending.” She corrects herself: “Empowerment, not power. Empowerment is what I’m about right now.”

She decided to record it in mid-October, at the same studio in which she recorded Tapestry (the A&M Recording Studio B, now renamed Henson, after the company behind the Muppets bought it in 2000). “I just felt that you hear so many times people saying: ‘Why should I bother to vote – my vote doesn’t make a difference, why should I bother to do this or that?’ It bears on the election because it’s about people who value acting in a spirit of love and compassion and caring for our neighbours – our immediate neighbours and our neighbours around the world – coming together to find what we have in common rather than the division that is going on.”

She returns to Trump. “The leader of our country is using rhetoric that is encouraging people to bring out their fear and hatred and violence, and I really feel we must do something to stop that, and I believe the Democratic party in our country is our hope for this now, because the Republican party is pretty much rubber-stamping – or if they’re not rubber-stamping, they’re saying nothing, which makes them, in my view, complicit in stirring up the worst emotions, in promoting lies: outright, provable lies.

Half my life became political, really. People know, but they don’t know how much time I’ve spent on Capitol Hill

When Trump was elected, King rereleased another old song, 1982’s One Small Voice – “The Emperor’s got no clothes on/ He doesn’t want to know what goes on/ Though everybody knows”. She says that, if anything, the intervening 18 months have been worse than she expected, but she exudes a certain optimism nonetheless.

She lives in a Republican-voting state and says the town where she is based is “not affluent”. Her neighbours are Trump voters, but “when someone in the community is in need, neighbours with maybe two dollars in their pocket will give one of them to help out”. She thinks they were persuaded by the “cult of personality” for “this man from Queens, who speaks about being bold, but perhaps is a coward on his own. I say perhaps: I don’t know. And they’re attracted to his rhetoric because he sounds bold and he sounds like he has the answers to the problems that beset their community.”

She says being back in the same studio and seated at the same piano that Tapestry was recorded on was “magical”. She has often talked about how immature she was when she made that album, which seems strange, partly because she was a divorced 29-year-old mother of two, and partly because its blockbusting success was partly due to Tapestry being among the first major rock albums to speak to a female audience in a mature voice.

But there is also a sense in which it fixed King in people’s minds as the figure on the album’s cover: a mild-mannered, folksy writer whose concerns lay more with the personal than the political. It’s a perception she seems keen to dispel. “I got involved through advocating for the environment and half my life became political, really. People know, but they don’t know how much time I’ve spent on Capitol Hill, working with politicians and that whole world. It’s what my novel’s about. And now, to have this song come out, it is part of who I am.” – Guardian