The Chemical Brothers: ‘Bernard Sumner called us a bunch of Wurzels’ 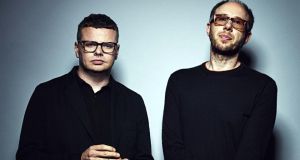 “We are friends and make music. Sounds a bit trite, but it’s true.” Above, Ed Simons and Tom Rowlands aka The Chemical Brothers

A frequently recycled quote about the 1960s claims that if you remember the 1990s, then you weren’t really there. For anyone who partied in the second half of that decade, the hit-laden back catalogue of The Chemical Brothers evokes a multitude of memories.

“When we play stuff from the ’90s, you can really feel that not only are people enjoying the song, but people are taken back to that time in their lives when that piece of music was very important to them,” says Ed Simons, who alongside his partner in psychedelic big beat and electronica, Tom Rowlands, has delivered six No 1 albums and 13 top 20 singles.

Back in the roaring 1990s, Simons said he had no interest whatsoever in still being a Chemical Brother after the age of 30. “That quote has come back to haunt me,” he chuckles. “It seems like our music still connects. If people enjoy what we do, we keep coming back until no one comes. I think I was 23 when I said that. We had absolutely no idea what being in The Chemical Brothers for the long haul would be like, or that we’d still be enjoying it. In the last few years, we’ve really enjoyed a new lease of life. The live show has been so good and so powerful that we greatly enjoy putting it on. In early 2000s, it wasn’t as enjoyable as it is now. Today, we greatly value what we do.”

In terms of their own future, The Chemical Brothers certainly aren’t done yet, even though Simons acknowledges they’re elder statesmen now. “We won’t be going for ever, so we’re probably nearer the end than the beginning,” he says. “Our friendship has been maintained, which is really important. That’s the crux of it, really: we are friends and make music. Sounds a bit trite, but it’s true. Yesterday, we had a sense of coming towards the end of the long creative process that is making an album and another good body of work. It does’t feel like, ‘Oh, this again’. We feel blessed.”

Work on their ninth studio album, and the follow-up to Born in the Echoes in 2015, is coming along very nicely. “We’re getting there and just reached the stage of mixing the final tracks and thinking about the running order,” Simons reports. “We’ve been DJing four or five of the tracks over the last year, because we always like to have things to play that we’ve made, so Free Yourself and Mad As Hell became our new electronic battle weapons. We’re really excited because we’ve played a lot of it live at festivals over the summer. We’ll have the usual anguish about the track list order and so on, but we’re looking forward to people finally hearing it, even though so many people listen to music on shuffle these days.”

The Chemical Brothers were always primarily an albums act operating in a 12-inch singles culture. “It’s always been like that,” Simons says. “We’ve always wanted to get things right and do justice to the work we’ve done. Albums might not be how a lot of people listen to music any more, but they mean a lot to us. On the first three albums, we felt there was a very definite listening experience from beginning to end. It’s like putting together an enjoyable puzzle. We’ll do things like throw track titles on cards on the floor and see what comes out. That mightn’t work so well, we’d try something else. We’d endlessly rejig the tracks on iTunes and see where we’d end up.”

The albums of their imperious phase in the 1990s, Exit Planet Dust (1995), Dig Your Own Hole (1997) and Surrender (1999), featured a host of voices from the era: Beth Orton, Tim Burgess, Noel Gallagher and Hope Sandoval, to name but a few. Simons doesn’t hesitate in naming a favourite.

“Bernard Summer from New Order, because he is such a funny man and so interesting, passionate and charming,” Simons says. “Musically, it was a really close collaboration. All the people we’ve worked with have really invested in what we’ve done together. On our new album, we work with a Norwegian girl called Aurora, who is incredibly talented. A friendship emerged with Bernard and he is a very avuncular presence in our lives. We did Out of Control with him and subsequently produced a track for the Twenty Four Hour Party People film. We’re huge New Order fans and we still trawl YouTube at our age to watch old interviews or New Order playing strange backwater venues in the United State. We’re New Order obsessives, so to be in the studio with Bernard Sumner and him to be such a good bloke is very special for us.”

Their initial meeting was memorable. “We lived in the basement of a house in Manchester that was historically an after-hours party venue,” Simons reveals.

“The people who has lived there in the ’80s had a big sound system. One evening we were all sitting around watching Blind Date or something and we heard a knock on the door. We opened the door and it was Bernard Sumner. He asked if there was a party on, which there wasn’t but we invited him in to watch Blind Date or whatever it was. He called us a bunch of Wurzels, which is a not-so-affectionate term for out-of-town students, and off he trotted. I’m glad that wasn’t our last meeting with the great man. I single Bernard out because of what they mean to us, but people like Beth Orton also became such good friends, and working with Q-Tip and Jonathan Donahue from Mercury Rev was such an amazing experience. We have a very collaborative and open attitude.”

The Chemical Brothers were born in London, but musically bred in Manchester, where the duo met as students. “Manchester gave both of us a totally different mindset,” Simons adds. “It was also where we came of age. We went out to see bands all the time, which was a cheap night out because you could pay a couple of quid on the door of the Hacienda. There was something on every night of the week and it was a very freeing time. As soon as I walk off the train at Manchester Piccadilly, I feel that spirit and atmosphere. People want to enjoy themselves in whatever way they can, if they can.”

Simons and Rowlands return to Ireland this bank holiday weekend for their first Dublin headliner in more than 10 years. “We did our very first overseas show in Ireland,” Simons recalls. “It was only our fourth or fifth gig in a marquee at a student ball. We played with Johnny Moy a lot and DJed in the basement of U2’s hotel. Someone put up bill for Féile ’95 on social media recently and asked if it was the best-line up ever. The Stone Roses, The Prodigy, The Orb, Massive Attack, Blur, Underworld and so many others all played. We were there for the whole weekend, because in those days, that’s what you did. It’s all a bit different now.”

One thing that hasn’t changed is how The Chemical Brothers get psyched before a show. “We always play music loudly in the dressing room,” Ed says. “We tend to choose something with a tinge of melancholy that you can dance to, so Bizarre Love Triangle by New Order often features. Music is the main ritual, but we usually have a little hug. Just to make it clear to the other person that we’re there for each other.”

Fatboy Slim
It is still somewhat baffling that a member of The Housemartins became big beat’s pioneer in chief and household name. Incidentally, Norman Quentin Cook claimed in the 90s that he ripped off The Chemical Brothers.

Propellerheads
History Repeating with Shirley Bassey became the moment when big beat met jazz and pop, and crossed over into mainstream culture. It also featured as the theme tune for So Graham Norton.

While it’s grossly unfair to constrict Liam Howlett and company to big beat, or any other genre, The Prodigy were the biggest and arguably the best. Their material still sounds fresher and less dated than any of their contemporaries.