Despite denouncing Stockhausen as a charlatan, Brian Boydell was no traditionalist. And Salvatore Sciarrino at Silenzio further cements Louth Contemporary Music Festival’s reputation 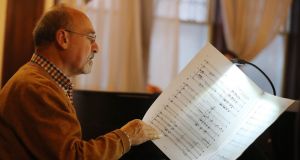 Martin Luther, Brian Boydell and Salvatore Sciarrino were all celebrated at three very different musical celebrations during the past week.

The Pipeworks Festival, Ireland’s triennial focus on organ and choral music, presented Mighty Fortress, a series of concerts marking the 500th anniversary of the Reformation and its “enduring gift to musical culture – the Lutheran chorale”. The Mighty Fortress name comes from Luther’s hymn Ein feste Burg ist unser Gott (A Mighty Fortress is our God).

Irish composer Brian Boydell, born on St Patrick’s Day in 1917, was the subject of a centenary conference at the Royal Irish Academy of Music and Trinity College Dublin. Boydell led a multifaceted life that saw him having to decide between painting and composing as careers, become a household name as a music broadcaster in the pre-television days when there was just one Irish radio channel, take up academic posts at the RIAM (teaching singing) and TCD (as professor of music), become a power broker in the world of the arts (not least as a member of the Arts Council from 1961 to 1983), and, in retirement, publish groundbreaking musicological research on musical life in 18th-century Dublin.

Sciarrino is anything but conservative. His music often breaks ground in ways that almost up-end the conventional approach to sound. He eschews the middle ground in favour of a focus on timbres and gestures that are often no more than incidental in the music of other composers, a mere wisp effectively enlarged to take on a life of its own, a silence pregnant with meaning from the sometimes scarcely audible sounds that preceded it.

I managed to catch two of Pipeworks’ Mighty Fortress programmes. English organist Andrew Dewar is a player with a long list of competition prizes to his name, including first prize at Pipeworks’s own International Organ Competition in 2014. His programme at St Patrick’s Cathedral on Wednesday was titled Chorale Heroics, and presented elaborate, chromatically intricate late romantic works by Sigfrid Karg-Elert (a composer whose reputation rests on his organ music), Liszt and the still little-known Swede Oskar Lindberg.

Karg-Elert’s more elaborate works are an acquired taste. The shifting harmonies can seem as slithery as food that is difficult to swallow, the textures dense beyond reason in terms of the effects they produce, the overall impression being of something that has been allowed to pass well beyond the peak of ripeness.

In the context of the outer limits of Lutheran chorale workings, his Chorale Improvisation on Ein feste Burg and the Symphonic Chorale on Jesu, meine Freude perfectly made their point. But the musical rewards of Liszt’s Bach-inspired Weinen, Klagen, Sorgen, Zagen were altogether higher, and Dewar’s playing – his finger and hand movements relayed to the audience on live video – was at its most rewarding in the less-entangled writing of Lindberg’s Sonata in G minor of 1924.

Proud is a powerful exponent of this great repertoire, which he handles with a kind of imposing implacability. It’s as if he can simply unveil a masterwork without interfering with it. Thursday’s performances, however, were not without interference. The swimmy acoustic of the church managed to muddy Bach’s musical lines, and the simpler and overtly brilliant manner of the closing piece, Michael Praetorius’s Ein feste Burg, cut through the acoustic more effectively than anything else.

The presentations I heard at the Boydell conference conveyed an odd view of a man whose main profile is as a composer. The issue was one of balance, with too much time spent on lesser works at the expense of his best pieces, and a distortion of focus that almost suggested that his main claims might rest on his music for harp or his research.

Salvatore Sciarrino’s visit came through the Louth Contemporary Music Society’s Silenzio Festival, which presented five events in Dundalk on Saturday, including a low-key but highly illuminating interview between the composer and Paul Griffiths.

The day’s major work, the Madrigali of 2007, settings of haiku by Basho performed with breathtaking savoir-faire by the Neue Vocalsolisten Stuttgart, may have suffered by coming at the end of a concert sequence during which concentration had been the order of the day.

Sciarrino’s works involving flute (played by Matteo Cesari both solo and combinations with soprano Valentina Colodonato and the Quartetto Prometeo) are the ones that seem to convey the essence of his musical vision most effectively. It’s almost as if the listener is placed inside the instrument, where sounds that are normally too slight to be noticed can become the focus of attention, and other fierce attacks transfix listeners with the strength of their windy, outdoor ferocity.

But more important than all of the music’s sonic qualities is the way Sciarrino gives the impression of redrawing time, of controlling stillness through a kind of rapture, that makes his music so unusually gripping.

Louth Contemporary Music Society has a reputation that was recognised internationally earlier this year by the award to its founder, Eamonn Quinn, of the €20,000 Belmont Prize, for innovative programming. The Silenzio Festival further cements that reputation.

The misunderstood, useless and brilliant artists of the Irish diaspora
6