Other Voices festival comes to Ballina, Co Mayo in September

TV recordings will be in St Michael’s Church, with further events in pubs and other venues 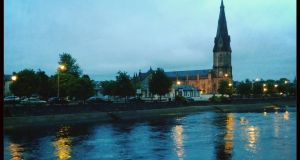 The Other Voices Open Call Ballina is now taking submissions

Ballina Co Mayo will host the Other Voices music festival for the first time on September 28th-29th. TV recordings will be held in St Michael’s Church, and the Other Voices Music Trail will occur across various bars, pubs, and clubs across Ballina.

In the past 17 years, the music television series and arts festival has been staged in Dingle, Derry, New York, Belfast, Texas, London and Berlin. Those who attend can expect story, song, debate, live music and creative partnerships as voices from across the globe band together.

Ireland’s Edge, a culture and creativity conference and a staple of the Dingle festival, will combine debate, performance and discussion to consider the positioning of Ireland as a location for developments in creative technology.

Another key event is the annual Food Fleadh Ballina, which will be hosted by Ballina Chamber of Commerce at the Old Military Quarter.

Executive producer of Other Voices, Philip King, said: “All of us were delighted to accept the invitation to bring Other Voices to beautiful Ballina in Co Mayo. We have strong connections with the county, Other Voices producer Tina O’Reilly is a Westport native and, in a way, producing Other Voices in Ballina is bringing it all back home for us.”

The first act announced for St Michael’s Church is local songwriter and performer Maria Kelly. She will be joined by Le Galaxie’s May Kay who will present at Other Voices.

The Other Voices Open Call Ballina is now taking submissions. For details and Submissions see www.othervoices.ie.

Tickets for Other Voices Ballina are free but limited. They are available through local media and online competitions, details of which will be announced in late summer. See www.othervoices.ie and @OtherVoicesLive on Facebook and Twitter.

Under the Red White and Blue: Greil Marcus’s Gatsby marred by self-indulgence
8

The Booksellers: A brilliant browse through New York’s small bookshops
10