NCH to take over National Symphony Orchestra from RTÉ 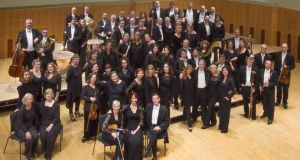 The Government has agreed in principle that the National Symphony Orchestra should move from being part of RTÉ to come under the remit of the National Concert Hall, rather than be established as a separate State body. The decision was taken at today’s Cabinet meeting.

Although no details have been released about how this will be achieved, RTÉ reports there will be discussions about the implementation of the recommendations of the recent Boaden report into the future of orchestras in Ireland, and an oversight group will be set up to facilitate the orchestra’s move.

A working group involving the broadcaster and the NCH, which will include consultation with the employees of both the NSO and the RTÉ Concert Orchestra, is envisaged, RTÉ reports.

The National Concert Hall today welcomed the Government’s decision, which is said strengthened the commitment to orchestral music in Ireland and “reinforces the role the NCH plays in enhancing that provision for the benefit of the Irish public”. The NCH has been proud to be the home of the orchestra since it opened, in 1981, it said.

An RTÉ review of the national broadcaster’s two orchestras, Ensuring a Sustainable Future for RTÉ’s Orchestras, commissioned last November, due in February and published on April 24th, says the symphony orchestra should be established as a national cultural institution in its own right, or as part of the National Concert Hall, and that public money should be used to facilitate the separation of the NSO from RTÉ.

The review was carried out by Helen Boaden, former director of BBC Radio and BBC News, and the London strategy consulting firm Mediatique. Its main recommendation is that, rather than being closed, both the symphony and the concert orchestra should be brought up to full strength.

It refers to “widespread support” across the orchestral-music sector and in the Government “for the retention of both orchestras” but acknowledges that both “now have significant vacancies and have been obliged to reduce commitments to touring and educational roles” and that “morale has suffered as a result”.

The review finds it “hard to see how RTÉ can fund even the current level of provision, let alone cover the increase to budgets that would be required for the orchestras to return to full strength and undertake touring and education programmes”.

At the same time it sees its proposed solution as “consistent with the Government’s own policies around promoting cultural Ireland (including refurbishment of the National Concert Hall)” and says it “provides both orchestras with the opportunity to establish and promote a fresh cultural vision”.

In a column yesterday the Irish Times music critic Michael Dervan speculated that RTÉ had “already cast the National Symphony Orchestra adrift” and that, in what was already said to be a done deal, the orchestra was being “given” to the concert hall. He argued that this would be unwise, not least because the NCH and the NSO compete directly for audiences when visiting orchestras play at the concert hall.