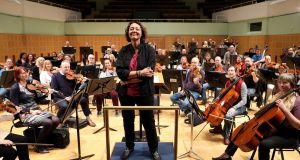 Nathalie Stutzmann, the new principal guest conductor of the RTÉ National Symphony Orchestra, begins her tenure with a programme at the National Concert Hall on Friday

The RTÉ National Symphony Orchestra’s new principal guest conductor, Nathalie Stutzmann, opens her tenure in Ireland with a sure-footed, decidedly centrist programme. Brahms’s Violin Concerto is performed by the German violinist Veronika Eberle, who Simon Rattle took under his wing when she was just 16. She’s now 28. The First Symphonies of Beethoven and Prokofiev make up the balance. By curious coincidence, Beethoven’s First Symphony also features at the Ulster Hall in Belfast at the same time, when the Ulster Orchestra under Rafael Payare couple it with the First Symphony of Gustav Mahler.

The Tallis Scholars NCH, Dublin Thursday October 5th 8pm €27.50-€59.50 nch.ie
One of Britain’s leading choirs, the Tallis Scholars, conducted by Peter Phillips, returns to the National Concert Hall for a programme entitled Inspired by the Sistine Chapel. The evening is built around Palestrina, and also includes works by Festa, Allegri, Campkin and Josquin as well as Thomas Tallis’s Spem in alium, the famous 40-part motet, in which the choir will be joined by 30 Irish singers. Before the singing there’s a pre-concert talk featuring Phillips in conversation with Tim Thurston at 6.45pm.

City Gallery of Art, Limerick Thursday October 5th 6pm €15/€8
The RTÉ Contempo Quartet continues its complete survey of the Beethoven string quartets with a tour that starts in Limerick’s City Gallery of Art and visits Cork, Navan, Kilkenny and Dublin over the next few weeks. As in the first tour, two of Beethoven’s quartets (the Quartets in G, Op 18 No 2 and in E minor, Op 52 No 2) frame a work by an Irish composer. The Irish work is new – Limerick audiences will be treated to the first performance of Raymond Deane’s Quartet No 6, and the concert will feature an interview between the composer and Linda O’Shea Farren of the Contemporary Music Centre.