Myles Kennedy has toured with Slash and The Conspirators and was nearly Led Zeppelin’s new singer. Now he’s back with his day job, Alter Bridge, who return with their heaviest record to date 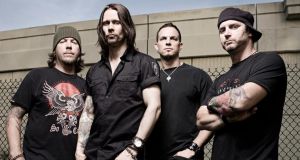 You must be one of our own with a name like Kennedy?
Actually, I’m an adopted Kennedy believe it or not. My stepfather [his biological father died when he was four] definitely has got some Irish descent. My original last name was Bass and I haven’t figured out where that name came from.


When you were growing up did anybody ever ask you if you were one of the Kennedys?
All the time. I’m originally from Boston where a lot of the Kennedy’s come from. I used to get that question for sure.

Fortress is Alter Bridge’s first album in three years. It is a lot heavier than its predecessor ABIII. Was that deliberate?
It’s just the way they fell together. Mark [Tremonti, guitarist ] and I started writing together again. There was a surplus of heavy ideas and we decided to put those out and make them work. With that said, there was plenty of those values and those moments when we are trying to have that element of dynamics, to have that journey as part of the sound. Overall, it is probably our heaviest and most intense record in that sense.


It is also your most complicated record. You seem to be messing around with the original verse-chorus-verse-chorus format with complicated time signatures and scale patterns.
That was very important to us. A lot of times, the fun part of the song will be after the second chorus and that is where you can decide where the journey can take a left turn. We did that a few times, like on Cry of Achilles and Fortress where we would really take some chances and keep it exciting.


You guys have been away doing other things for the past three years. When you’ve come together again, has that restoked your creativity?
Absolutely. I think we were able to go off and do something completely different. What I did with Slash and the Conspirators was a very different kind of music. Genre-wise, it is a step in a different direction. When I decided to reconvene with Alter Bridge, I felt I had a lot of ideas that were very different from what I had been doing. It was the same thing with Mark as well. The record came together very quickly because of that.


You have Michael “Elvis” Baskette back as a producer for the third album in a row. Some bands like to change producers, but you are sticking with him. Why is that?
I think our motto was ‘if it ain’t broke, don’t fix it’. We were so happy with what he brought to the last two records prior to Fortress that it was a no-brainer to use him again. He’s such as incredible talent. He has great songs, he has great ideas. We will definitely be working with him again.


The opening single Addicted to Pain has been getting a lot of good reviews. I take it that you are pleased with it yourself?
Yes, that song came together pretty well early on in the process. We felt we had the single so to speak. That song liberated us to experiment a little bit with the other tracks because we weren’t chasing down a single at all times. We were really able to have fun with the rest of the record.


The opening song Cry of Achilles has a beautiful acoustic piece at the start of the record – a lot like Anastasia on the album you did with Slash.
That was a piece that I had for a little while and played it for Mark. He was really excited about it. He built the song from there. It is fun to play, but it is definitely going to be a challenge to execute that every night. It is funny. I was wondering if Anastasia was an influence on a subliminal level. There was a lot of the bands that I love that have integrated those acoustic intros such as Metallica who have done that quite a lot.


Anastasia is a brilliant song. How much of it was Slash’s and how much of it was yours?
Musically, it is his thing. I come in and put the melody and the lyrics to it. That’s generally my role. I remember when he played me that track, I was really excited. I was familiar with the guitar part. It is an incredible piece of music.

Has being with Slash raised the profile of Alter Bridge too?
Because Slash is such a well-known performer all over the world, it definitely helped with the awareness of Alter Bridge. People come up to me and say that they saw me playing with Slash and it turned them on to the other things I do.


Slash fans want to know what is he really, really like?
I’m not just saying it, he’s one of the coolest people I’ve had the opportunity to meet and work with. He’s a very intelligent, hard-working human being with a very big heart. I consider myself beyond fortunate to have the opportunity to work with him. He’s an exceptional person.


Did playing with him improve your own guitar playing?
When you get to hang around with other players that do something different to what you do, you definitely embrace certain elements of their approach or their philosophy. It all rubs off on you and make you a better player.


Back in 2008 you rehearsed with three members of Led Zeppelin, John Paul Jones, Jimmy Page and Jason Bonham when it appeared that Robert Plant would not be willing to take part in a reunion tour. A lot of fans are disapointed that Led Zeppelin never reunited after the O2 concert in 2007.
I would have loved to see the Led Zeppelin together and got a ticket for the O2 concert. At the same time, I understand the concept of leaving things the way they were. I totally get that. For me, that band will always be the band as far as rock goes. They wrote the blueprint.


Jimmy Page or Slash – If you had a choice to play lead guitar, who would it be?
That is the most impossible question ever.


Don’t say, they’re like my children, I love them both equally. That’s cheating.
I was going to say that it would be like Iron Maiden, Judas Priest or Thin Lizzy where you have a twin guitar attack.


Are you a guitarist or a singer first and foremost?
I’m a guitarist. The guitar saved me from a life of crime as a teenager. It is still the thing that I love doing just about more than anything. Given the amount of time I have spent playing the guitar as opposed to singing, I would say that I’m definitely a guitar player first. I really enjoy the moments with Alter Bridge where I can step out and play lead and have fun.


Fortress is out now