‘Men just get away with being composers. We have to do this activism and keep composing’ 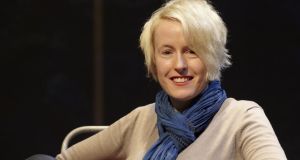 Jennifer Walshe: “We call it an opera, but it’s not an opera in the conventional sense.” Photograph: AT Schaefer Im Schellenk

Jennifer Walshe is a composer who doesn’t just think outside the box, she lives outside it, too. In 2000, at the age of 26 she won the Kranichsteiner Musikpreis at Darmstadt, one of Germany’s best-known hotbeds of experimental music, where she later became a tutor. In 2016, Dublin-born, London-based musician, she scored twice at the British Composer Awards, taking the award for innovation for “her lifelong dedication to questioning and challenging the status quo through music and performance”, and sharing an award in the chamber music category with Brian Irvine for their collaborative work 13 Vices.

She’s hugely interested in the kind of sounds that are not usually regarded as being of much musical interest. The first piece of hers that I heard, back in 2000, was As mo cheann for voice, violin and stones. The plethora of scraping, grating sounds, mutterings and strangled vocalisation have become hallmarks of a composer who puts herself to the fore in the performance of her works, so much so that some of them are hard to imagine in the hands of anyone else.

Walshe, who’s in her mid-40s, works with video, often appearing on screen herself, and with electronics, and has also created a body of work by an imagined, historic Irish avant-garde. She wrote scores, made artefacts, dreamt up histories and concocted media reviews for this strange group of predecessors that she never had. She even performed some of their works without divulging that they were fictitious people.

And she later broadened the idea by getting other real-life Irish composers in on the act to broaden out the fictional history of Irish experimentalism. The projects have been backed up by exhibitions, the exhibitions have been documented in print, and the music has been issued on CD.

There are parts in the piece where I’m asking the percussionist to wrap objects in Amazon packaging, and I quote from a text about acceleration in globalisation and neo-liberalism

It’s not the kind of background that would lead you to expect an orchestral work, though her new piece, The Site of an Investigation, which opens the New Music Dublin festival on Thursday is not actually her first. The work, she says, is around a half an hour long, and is for her voice and orchestra.

“John O’Kane [former executive director of RTÉ’s orchestras],” she explains, “approached me a couple of years ago and said he specifically wanted me to write something where I would be a soloist with the orchestra.”

She worked on it for most of 2018 and “it’s a piece sort of about my experience of 2018 and, by extension, a lot of people’s experience of 2018 being a year that was stressful as we entered yet another phase of this endless concern about Brexit and Trump and precarious working conditions. Even the orchestra itself, at the moment, is in a difficult position.

“That was very much in the back of my mind. There are parts in the piece where I’m asking the percussionist to wrap objects in Amazon packaging, and I quote from a text about acceleration in globalisation and neo-liberalism. The orchestra are also dealing with the ramifications of that.”

There’s also a personal aspect to the work. “There’s a friend of mine, Stephen Swift. He was a fantastic actor, he acted in the Gate an awful lot, a childhood friend, he was in one of my early operas. He was sick with cancer last year, and he passed away in the summer. So the piece is dedicated to him.

“There are themes of trauma and loss within the piece. He was a very loving dad and a very devoted husband. So there’s their [his family’s] grief, which is a sacrosanct, very sacred grief. Certainly, myself and all of my friends have really felt shockwaves of that coming through.”

“Orchestras tend to commission the same composers again and again, and they essentially then train the composers how to write for the orchestra. I was really happy to be approached by John O’Kane and to do a project like this. But it tends to be that it’s the same names cropping up again and again.”

She points the finger at music publishers, who “stand to make a lot of money from orchestral performances” and says “I don’t see a lot of orchestras actively seeking out new types of composers or new types of collaborations. It tends to be that they’ll commission a composer when they’re younger and then they continue commissioning that composer at five-to-nine-year intervals throughout the composer’s career.”

She takes heart from last December’s London Contemporary Music Festival, where they put together an orchestra for the occasion. “I don’t know how they did it, and I saw a piece by Elaine Mitchener [b r e a d t h b r e a t h], a piece by Neil Luck [Regretfully Yours, Ongoing] unlike anything I’ve seen for orchestra. That was a festival deeply committed to trying completely radical things. The room was full with five hundred people who were going crazy and really enjoying it, and a lot of young people there, and a lot of people you would never see in the Barbican at an orchestral concert.”

She has concerns about issues of privilege and class in orchestral life, and expresses a desire to see more work in schools, an area of strength for the Ulster Orchestra and the Irish Chamber Orchestra, but one where the RTÉ orchestras lag behind.

When I met with Walshe she was in rehearsal in Amsterdam’s Muziekgebouw aan ’t IJ, part of a team of eight musicians working on another new piece, Time Time Time. “We call it an opera, but it’s not an opera in the conventional sense,” though obviously it is about time – the libretto was co-written with the philosopher Timothy Morton, author of Hyperobjects: Philosophy and Ecology after the End of the World. The musicians are all experienced improvisers, the duos Streifenjunko and Vilde&Inga, MC Schmidt, Lee Patterson, and Áine O’Dwyer, “and they all have very distinct personalities. When you work with free improvisers it’s a bit different to working with musicians who are trained to play notated music. Everybody has a distinct energy that you’re trying to use”.

Yes, there is a score that everybody got, and there is 180 pages of text. But there are freedoms you don’t normally have with a notated score. “There’s still this fixation with the idea of the composer as the one true author, and this obsession with the young genius writing a piece. That doesn’t really exist in other areas of music.

“Think of somebody like Prince or David Bowie. Prince would be one of my favourite musicians ever. He had a band, he would say, ‘I’ve had this idea and here are these chords,’ and the bassist would come up with a bass line that went along with it, and they would talk about it, and the drummer would throw some ideas out. Maybe Prince led it, but the rest of the musicians had a stake in it.”

It comes as no surprise to discover that Walshe thinks of herself less as a composer than as a musician.

She’s understandably passionate about the treatment of women in music. “There’s a historical problem where female composers aren’t programmed, aren’t talked about. A lot of the other institutions I’m involved with, like Darmstadt for example, are really trying to tackle these issues and discuss them and host conferences about post-colonial programming, and things like that.

“It’s difficult in Ireland, because the discourse with Waking the Nation and the initial discourse from the theatre side of things, some of that is taking a very long time to filter across.” She praises Sounding the Feminists for their “stellar work” but wonders why male composers have been so quiet on the issue.

“It feels like it’s our problem to solve, which is very frustrating. It feels like the women composers have been disenfranchised or marginalised or overlooked and there’s no male composers being asked to comment on that or talk about the structural inequalities that would have resulted in that. They just get away with being composers. We have to do this activism and keep composing.”

She’s full of praise for Waking the Feminists. “The first thing they said was, look, it’s OK if you’ve never programmed any stuff by women. All you have to do is say this year we make a change.” And if she had the power to enforce change, what would she do? “I would say you don’t get funding unless, over a five-year period, you demonstrate that you’re programming a minimum of 40 per cent of work by women. Then everybody would change their tune.”