Memories of Dolores O’Riordan: ‘Zombie was a voice for all of us fed up with senseless violence’ 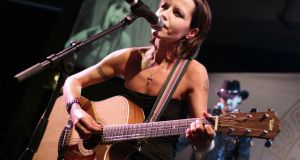 Beth Woods, London
My first proper gig was going to see The Cranberries at Mayfield Leisure Centre in Belfast in 1995 for the No Need to Argue Tour. It was amazing. I was surprised to be surrounded by Spanish people who went absolutely insane when they played Zombie. It was a cathartic release for many us, 1995 was still dark days and it was an anthem and a voice for all of us who were fed up with the senseless violence.

Áine NicCharthaigh, Limerick
A little older than the teens that grew up on Dolores O’Riordan, her unique sound cut straight through to that space inside that calls out under the din of the mundane. Those unique sounds that Dolores created became for me, and millions of others, part of a personal fabric. Snippets of news about her over the years would catch my attention... but underlying all that, a recognition was much deeper. We went to the same school. Breathed the same air of Limerick city. Walked the same streets, shared the same history and accent...But, now I know what that recognition was...Dolores was the familiarity of vulnerability, the honest human experience of living with inner turmoil. She was also the sisterly familiarity of the will and zest to embrace the fullness of living. Here in Limerick, we mourn the loss of our sister.

Amie Howard, US
I grew up in San Diego and was an awkward introvert. I first saw Dolores on MTV. I just was mesmerised by her talent, and her lyrics mattered. She wasn’t one to try to be like anyone else but as a 17-year-old girl I got my ears pierced all the way around just like her. She was everything to me at that time of my life. I’ll never forget the inspiration she was to me.

Kathy Keane, Galway
She was real. She was many things. She did it her way. She was cool.

Patti Murphy, Frederick County, Maryland
Woodstock '94. I arrived at the venue after walking several miles. As I came through the woods into a clearing the Cranberries were just opening their set. I wasn’t very familiar with them, but was taken aback by Dolores’s vocals. It turned me into an instant fan. To this day I think of Dolores singing her heart out.

Frank Long, Limerick
As a student in UL in 1990, I was stopped while entering a bar one evening and asked for ID. The door man explained that a band from town were playing and tons of their school friends were trying to get in. The Cranberry Saw Us – The Cranberries before the name change – were on the bill and I remember Delores doing a lengthy 20-minute vocal sound-check in the crowded pub before they finally took to stage. They were not the polished rock outfit they later became but Delores’s voice was incredible. Two years later they had conquered the world.

Nikita Volkov, Madrid
That heavenly voice was the soundtrack of my teenage years and all the time thereafter. No Need to Argue was the first album I saved my pocket money to buy and treasure; the rest followed. Dolores sang to my first kiss, to my first broken heart. Thank you for every single chord and every single moment.

Mo O’Gorman, Minneapolis, US
When I think of Dolores though, I think of that first moment I saw her – this fragile, wee woman with that incomparable voice. She sang in her own accent and in her own style, yet she tapped into something universal. She was a feminine force at the head of a really great rock band.

John McClenaghan, US
Linger, and Dolores’s soulful and penetrating voice, will always remind me of the transitions in my life. I remember hearing it blare out over the dance floors and bars of Georgetown. I remember hearing it as my mates took me bar-hopping the night before my wedding. I remember my girls, as toddlers, dancing around the livingroom to Dreams, usually with several repeats. Poignant memories are stirred up every time I hear either of those two songs.

Joset Jordaan-Marais, South Africa
Dolores was a friend I knew but never met. An inspiration. She gave me the strength to discover my voice and to pick up a guitar. Her lyrics and voice became the soundtrack of my life. She was with me during good and bad, happy and sad times.

Astrid Holierhoek, The Netherlands
She inspired me with her songs to live my life and be myself. Thank you for all the wonderful songs.

Rafael Fresno Fresno, Madrid
Few singers can be fragile, weak, strong, confident and intimidating at the same time. Dolores O’Riordan was one of them. I remember when The Cranberries’ first album was released in Spain, it was an absolute hit. Then Zombie was played everywhere, bars, discos, parties...

Nathan Markham, US
I am an artist who has been painting since the 1990s. The Cranberries first album was always the album I would put on and play in the morning as I prepared to make my paintings. Dolores’s voice would charge my creativity and centre my mind and haunt my studio through my work ... in my paintings, drawings and dreams. She and her righteous, tunnelling voice opened my heart ... every time.