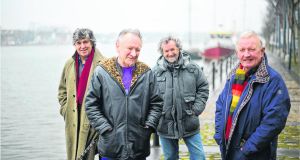 Great art always leaves a memory in your mind. In this case, I’m in the woody corner of a big field in Co Laois and the Electric Picnic is in full throttle on all sides. It’s the Sunday evening, the sun is sinking in the sky and there’s a tingle in the air. You could probably call it magic, if you were that way inclined.

On the Body & Soul stage, four giants of Irish music are playing their hearts out in front of a large mass of people. Between them, Liam O’Flynn, Andy Irvine, Paddy Glackin and Dónal Lunny have seen, heard, played and experienced more in the folk and trad world than most. The bands they’ve been part of in the past are part of a rich, storied, sometimes unruly, occasionally elegant and always enthralling history.

But that’s the past, that’s history. What the band they call LAPD are doing now is just as vital and intriguing as anything which has gone before. It’s four maestros throwing new shapes and breathing new life into the tradition. It’s done with the utmost respect for how the music got to this point, but it’s done to prove a point. This is music that can look forward with enthusiasm and vigour.

Dónal Lunny and Andy Irvine have just been asked if they keep a tally of the bands, combos and ensembles they’ve been part of. They look at each other before bursting into laughter. It would be some number, they reckon.

Irvine recalls one band more clearly than others. “Most of the bands I’ve been in are above board and everyone knows about them, but I would like to introduce the A1 Skiffle Group, the first band I was ever in. One of the guys in the trio was good with a pen so he painted A1 Skiffle Group on a tea-chest and everybody thought it stood for AI, Andy Irvine. They were a bit pissed off with that so that was the end of that one. That was 1957.”

A long time ago, a lot of music played since then. Between them, the four men in LAPD have featured in Planxty, the Bothy Band, Moving Hearts, Sweeney’s Men, Mozaik, Patrick Street and in dozens of other combos and projects.

LAPD is the latest entry on the ledger. It began when Lunny and Irvine were performing as a duo, and Glackin and O’Flynn were also operating as a duo. “We talked about it for a long time and it kind of made sense to come together because it was deceptively easy to do,” says Lunny. “Liam, Andy and I shared a lot of material and then Liam and Paddy had a repertoire between them and Paddy and I had been playing together for donkeys. The whole thing knitted together without much effort at all and it just grew from there.”

The reaction to LAPD’s shows to date has been tremendous. “There’s a young audience at the gigs, which is gratifying, because it doesn’t happen outside of Ireland, ” says Irvine. “If we played a gig at a folk festival in England for instance, everyone would be on their last legs.

“In Ireland, the origin of that was the Planxty reunion. Leagues O’Toole did that documentary and we realised that if we did get back together that we wouldn’t be playing to people who were there the first time around. That was wonderfully exhilarating. I remember playing in the Point as was and the first few rows were all so young and that has continued with LAPD.”

“I remember you singing one of your funny songs at one of your birthday shows in Vicar Street last year,” remarks Lunny to Irvine, “and a large number in the audience behaved as if they were hearing it for the first time. It was really enjoyable and striking to see. We really are playing to a fresh audience.”

Lunny notes that not a lot has changed in terms of how folk and trad bands operate. “The scene is changing very slowly and I think it should be changing a lot faster. What people call the model or the formula of bands hasn’t changed for yonks. The Planxty model and the Bothy Band model have become standard.

“To my mind, change is a matter of modifying and taking an approach that is compatible with tastes. You can warm up the music or colour it in a way that doesn’t take over or obscure the original flavour. It has to originate in the music – otherwise, it’s an imposition.

“For instance, I’ve always maintained that a rock rhythm section interferes with the intelligence of the music. That has always been a challenge for me. But I believe that there are ways to do that and bring it much closer to contemporary music, but I don’t think anyone has cracked that nut yet.”

“I’m not sure it’s a nut that’s crackable,” chips in Irvine. “Any time anyone has tried to move the sound into a more contemporary setting, well, they lost me. Maybe I’m the purist who is holding everything back?”

“But you’re the person we’re talking about,” points out Lunny. “There are purists who would regard you as part of the innovation of the present generation. The fact that you are accompanying traditional music raised the game by bringing what were previously unaccompanied songs into a new place that people can relate to and enjoy.

“It’s just too much for a lot of people to listen to song after song with no accompaniment. The same with pipes. It’s like being handed a sirloin steak – hopefully beef – with no veg or
spuds. We’re the spuds and veg department.”

LAPD’s gigs to date have been sporadic, and both men acknowledge a plan and focus is required. “Rehearsal time is limited by the fact that we’re doing so many other things apart from LAPD,” says Irvine. “I think personally that we should make an album because that would make us focus on putting together a whole new repertoire.”

“That would necessitate you staying in one place for more than two days at a time,” chides Lunny. “Andy Irvine, fresh in from Patagonia!”

“The reason why there isn’t more focus on LAPD is because the gigs are seriously spaced out, so we rehearse for each gig as opposed to a tour,” believes Irvine. “If we did record an album, it would be a serious investment of time and energy and we would be eager to follow that up by touring.”

As things stand, there’s an abundance of other projects taking up their time. Lunny talks about an album of Irvine’s songs he wants to do, as well as “a huge amount of material” from last year’s Irvine birthday shows at Dublin ’s Vicar Street to be mixed and mastered for a DVD release.

Then, there are the ghosts in the machine in the shape of old bands and continued mutterings about reunions. “It’s very, very difficult,” says Lunny. “A good comparison would be the Luas line. It was the old Harcourt Street line until it closed down and people then built houses along the track. Then, they had to buy it all and dig it all up to put the Luas down, but they did it.

“It’s the same with people’s lives because they solidify into different patterns so you have to find and make time to put a band back together again. It’s really complicated. We had to plan Planxty a long way off to make that work. People ask a lot about the Bothy Band and it would be a matter of the right moment, which has never presented itself. But who knows? The door is still open.”

Irvine finds that there are just not enough hours in the day anymore. “Time is the problem. When we were younger, there was a lot of time to do things. Now, that’s not the case. I’m a bit older than Dónal and I’ve reached the age where my mortality is within sight. I don’t want to be on my deathbed wishing I had done something. Yet I am my own worst enemy, I don’t get the stuff I want to do done. Hopefully, there’s lots more to come.”

The joy, though, remains in the playing, in getting up on a stage and getting carried away by the music. “As soon as you get out there and the pipes and the fiddle start off something”, says Irvine with a twinkle “it’s just magic.”