The Portland, Oregon rapper delivers cutting social commentary amid the jokes and rhymes – and he’s a Spice Girls fan 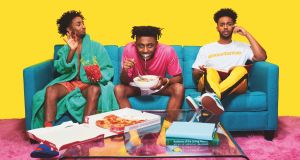 Me, myself and fly: Aminé

“F**k a fortune teller, they can’t tell me who I am/I’m a yellow mellow fellow and my cousin is the sun/I’m Aminé to my niggas and Animé to a punk.”

This sunny, funny fellow is Aminé, pronounced ah-mee-nay, and his album Good For You is quite literal in its description. Aminé is good for you.

Adam Aminé Daniel is from Portland, Oregon, a city that is a breeding-ground for the quirky hipsters of yore that still wear oversized glasses, despite their 20/20 vision, and bobbly hats seen in Wes Anderson’s The Life Aquatic with Steve Zissou, even though it’s blistering hot outside. For Aminé to make music that stands out in a city that promotes individuality to the point that everything is exactly the same, is quite something.

From the bright yellow of his album cover, where he’s sitting topless on a toilet with his jocks down around his ankles, and the Key & Peele-style humour in his music video for REDMERCEDES that ridicules racial profiling, Aminé delivers jokes, social commentary and, generally, just a bang-on personality. The perfect combination for our new VBF.

The 23-year-old spent his summers interning in New York in places such as Complex magazine and the record label Def Jam, trying to make his break anywhere but Portland, an issue he addresses in Turf, which details the gentrification happening in the place he grew up. All the while, he was releasing mix tapes, which eventually led to the creation of Good for You, which is like the enthusiastic younger brother of Outkast’s 2003 fantastical double album Speakerboxxx/The Love Below.

When most of his hip-hop peers focus on the doom and gloom of love, life and wimmin – here’s looking at you, Drake – Aminé takes the upbeat route. On his recent single Spice Girl, he claims that what he really, really wants is a Spice Girl, and, clocking up multiple references to the almighty girl group and a cameo from Mel B in the video, he proves that he’s more than just a casual fan of Sporty, Ginger, Posh, Scary and Baby.

On November 15th, 2016, one week after Trump’s election win, he made his TV debut on The Tonight Show with Jimmy Fallon and, during his performance of Caroline, he added an extra verse for the new president. “If my president is Trump then it’s relevant enough to talk about it on TV and not give a (gasp)/I’m black and I’m proud/My skin is brown and I’m loud,” he rapped, “You can never make America great again/All you ever did was make this country hate again.”

With all the bounce of a Nickelodeon sitcom star and his hawk-eyed observations, Aminé is the vibrant dose of realism and optimism that you need to get you through your day.

This week we are unfriending . . . Ben Affleck

This week we are kicking Ben Affleck to the kerb, not that he was top of the invite list to our birthday party or anything. On the promo trail for his new movie Justice League, he made a poor remark regarding the introduction of more women into the movie series. When asked about the possibility of Supergirl joining their forces, he interrupted his co-star Ray Fisher to say, “you following the news?” Considering the hundreds and hundreds of women in the industry who have come forward to say that they’ve suffered sexual abuse, assault or just your old-fashioned sexism at work, why don’t you pipe down, Batboy?