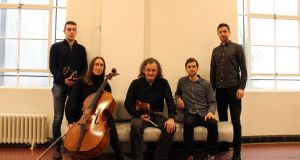 If repetition is the death of art, then Martin Hayes’s music is destined for infinity. How tempting it might be to tread water with The Gloaming, given the gargantuan successes that the band has enjoyed since their debut performance in 2011. But this east Clare fiddle player is a musician on a quest, propelled by an almost childlike curiosity to see what lies around the next corner, what delights await at the next crossroads.

“I spent a lot of years with just Dennis [Cahill] and myself, doing our own thing, and I enjoyed it very much,” Hayes offers, with his customary sanguine perspective, “but I also felt that I probably should have kept moving faster, and now that I’ve discovered the excitement and joy of doing all these projects, I feel there’s no reason to not keep doing it.”

For Hayes, collaborations bring all kinds of possibilities, chief among which is the necessity to step outside of his own comfort zone.

“In my case, I have intense knowledge and capacity in a very specific area, with huge gaps of knowledge in other areas,” he offers, comfortable in naming his own musical Achilles’ heel, “and huge deficiencies in my musical capacity. For example, my ability to learn music fast. I don’t have that ability. If there’s a bit of music to be learned, I will be the slowest one in the group, the last one over the hump.”

It’s that acknowledgement that there is no armour without a chink that characterises Hayes’s entire approach to music: it’s at the heart of the best of music, he believes.

“As I explain when I’m teaching music sometimes: music is not a skill. It’s a collection of skills, and you can be good at some of them, and not so good at others,” he muses. “The most important thing is the ‘why?’ of it. Great music can be made with very simple melodies. It’s not how incredibly dextrous and capable you are. Intentionality is very important: the internal reality of the musician has a very real and genuine bearing on what happens. Music is a communication and just like the conversation we’re having right now, you can feel whether what I’m saying is real. It’s the same with music, so the clearer your thoughts are, the freer you are to share that with an audience.”

Hayes has named his latest collaboration The Common Ground Ensemble. It’s aptly chosen, putting its finger on the foundation in Irish traditional music that his latest collective shares, albeit each of them coming to it from their own intensely personal perspective.

“The key,” Hayes says, “is just getting really great musicians to work with, and they are exceptional. Kyla Sanna is a guitarist from New York, who I worked with on a few occasions. He was the major arranger of the music on the Brooklyn Rider album and he has a fiddle/guitar duet with a woman called Dana Lyn. He also does a lot of avant garde, improvisational and experimental music. The common ground is that he has familiarity with traditional music, and yet he’s totally comfortable letting ideas from all around the world come together. Kyle knew exactly what I was attempting to do.”

Alongside Sanna is cellist, Kate Ellis, artistic director of The Crash Ensemble, and a long-time collaborator. Together, they’ve seen so many musical ideas bud, but not reach fruition, because of the competing demands of their schedules. Now is their chance to make space for something more substantial to flow.

Hayes has returned to his deepest roots with The Tulla Céilí Band in inviting 24-year-old multi-instrumentalist Brian Donnellan to the fray.

“Brian is a lovely concertina player,” Hayes offers, “and he plays the bouzouki and piano. I’m going to have him play the harmonium too. He’s the multi-instrumentalist, the one who can change colour as we move along. And sometimes we’ll just play a few east Clare tunes on the concertina and the fiddle, so we can touch base with this very elemental part of the music now and again. That’s always there as a reference point for us all, particularly when we stretch the music and go into further fields. But Brian and I have this particular connection when we just play these east Clare tunes. He can breathe and phrase these tunes almost the same as I do. When we play together, there’s just no space between us. We’re totally mirroring each other.”

The intergenerational nature of this latest ensemble tells its own story, but what counts most is the chemistry between the members, Hayes insists, and the alchemy that emerges from their encounters.

One of The Common Ground’s most intriguing members is Cormac McCarthy, a jazz composer, arranger and pianist from Cork.

“Cormac is world class. He is an incredible musician, both a classical and a jazz musician,” Hayes enthuses. “And yesterday as we were working out a piece, he was lilting the tune, and I said to Cormac: ‘now where would I find a jazz pianist that could lilt a reel at the same time?’ That’s the knowledge he had at his fingertips. He is fantastic.”

If there’s one thing that The Common Ground Ensemble shares with all of Hayes’s past projects, it’s the purity of the vision: that eternal musical quest.

“When I’m playing music, I’m not concerned about style, I’m concerned about this line of melody, and what I might do to imagine it, to support it, to reveal its power or majesty or joy or melancholy. All I’m asking is for you to join me in that effort. Just to see what that melody can be. That’s what it’s all about.”

What Hayes is insistent about, is that The Common Ground Ensemble won’t descend into any preconceived, colour-by-numbers, crowd pleasing set list.

“I learned this from the early years, in Chicago as a performer in cabaret clubs: that it is entirely possible to guess what an audience might want, and to deliver simply what they want, and to then begin manipulating that process over and over again,” Hayes says. “So I know how that works, and I know I don’t want to do that, because you leave yourself out of the equation entirely. The music doesn’t make any sense if it’s not opening up your own heart.

“It’s great for an audience to have that experience, but it’s doubly important for the performer to live that experience too. It needs to have integrity and be real. I think audiences crave reality in music. They crave the feeling that the experience is genuine, that it’s happening in this instant, in front of them. That there’s an aliveness and some element of risk being taken. That there’s some emotional vulnerability in it. All of those things need to be happening for anybody to feel anything.”

And ultimately, it’s the freedom of the musical exchange that matters most, he believes.

“Music is music,” Hayes says. “In Irish music, the universal part is the actual physical line of melody [he traces his finger in the air down the virtual spine of a tune]. That is the true core of Irish music. Melody is a universal. According to Steve Cooney, if the Gaelic order had survived, we’d have ended up with Baroque orchestras playing this music, but we didn’t, so we were left playing with a single line. It looks like we lost something, but it also means that now if we honour this single line of melody, the universe is wide open to us. In terms of musical ideas from now, from other periods, other cultures, other genres. You can have a lot of fun asking them to engage with this melodic line. There’s great freedom in it as long as you honour, completely, the central point, which is the line of melody.”

“As an artist, you’re retired from the conventional route in life anyway. Retirement is great if it’s from something that’s a burden to do, and I think it’s a terrible disaster if it’s something you love doing. I will keep going to the last minute.”

Lyra McKee: The search for a lost body on Cave Hill
8