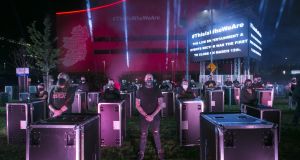 Venues across Ireland were lit up red in support of the EPIC pre-budget submission launch. Photograph: Leo Farrell/Photocall Ireland.

As details emerged of how the Department of Culture’s new €50 million support scheme targeted at live entertainment will work, Epic, representing the industry, voiced concern that the wider budget Covid Restrictions Support Scheme (CRSS) won’t be able to save some of its members.

The new €50 million support for live events in 2021 (as well as funding for music and equipment grants) for next year in Irish venues, announced in this week’s budget, is the first time the commercial entertainment sector has received state support. It was widely hailed as a significant move to support the industry, which has effectively been closed down because of Covid-19 restrictions, with no certainty about when big music gigs or festivals will be able to return.

The scheme is a new departure for the Department of Arts, most of whose investment has been in the funded sector and the National Cultural Institutions. The Arts Council, which received €130 million, its highest annual funding, in the budget, has received applications since the pandemic from individuals and organisations who would not previously have sought state support, as the arts and culture sector grapples with fluctuating restrictions and has been virtually shuttered.

At the briefing Minister Martin observed “The main lesson I’ve learned in my first few months as a minister during a pandemic is to engage and to listen to those who are working in the industry. They know what is needed. And my job as minister is to support them.” She said “We have to adhere to the guidelines but I want as many people as possible performing and listening again to music because we really miss it as a nation, it goes to the very heart of who we are.”

Following the cancellation of music gigs scheduled from the end of March on, and multiple festivals and large scale events, EPIC, an event production industry Covid - 19 working group, mobilised and made a strong case for support of the commercial entertainment sector in the face of the pandemic. This week it welcomed the Department of Arts’ new €50m scheme, as well as the fact that the previously non-funded commercial sector was recognised separately to the funded arts sector, saying “the Government has listened and engaged with us”. But it voiced concern about why the Covid Restrictions Support Scheme (CRSS) excludes many specialist SME businesses it represents, saying “some are now just days away from collapse and immediate funds are needed to save them”.

The Department of Arts’ €50m live entertainment package follows a €5m pilot stimulus for performance 2021 support, announced in July, with applications starting last month; the pilot was oversubscribed to the tune of €15m, and decisions will be announced soon. Among the many applications for funding, “one very interesting application” came from a consortium of independent music venues seeking support for a total of 368 events: 16 separate events in 23 venues, creating 3,500 days’ employment, according to information from the department after the budget briefing.

The now expanded €50m fund to incentivise venues, producers and promoters of live cultural performances and plan new productions which employ creative workers, will be administered by the department of Tourism, Culture, Arts, Gaeltacht, Sport and Media, with criteria including a track record in ticketed live productions, showing that a proposal supports employment, and that performers, crew and arts workers are paid. Grants will range from €10,000 to €800,000.

At a department budget briefing Minister Catherine Martin said the live entertainment package – details may be reviewed following the pilot – is “for larger venues, well as schools, colleges, musical societies, and to support songwriting and recording”, and for equipment. “The bulk of it is for live music.” The scheme was “designed in consultation with the sectors and aims to build confidence in recommencing rehearsal and productions, and event planning. The idea is we help shoulder the risk. It’s about venues opening up again and compensating them for reduced capacity.”

Minister Martin began the briefing by saying how privileged she had been to hear some preparations for this Saturday’s Lá na Cruite/Harp Day, that has had to go online, adding “the magical notes of an O’Carolan tune plucked by Cormac de Barra reminded me of how important music is…and of how much I missed live music, how silent out country has been. It saddened me. That’s why we want more music, and for everybody, not just behind closed doors.”

In answer to questions about how the scheme will benefit freelance workers, including musicians or crew who cannot apply directly for it, the minister stressed the fund was “about paying the performer and the staff as well. I’d hope that scheme would be of use to [SMEs that supply equipment and services, too] if they’re being hired by the venue. If a venue opens and you have people performing, and technicians employed again, my hope is that it will trickle down. It’s not just to support a venue, but a venue in putting the performance on. That’s the way we designed it, to reach all those, and it was done with engagement with stakeholders like Epic.”

Epic had asked the Government for “immediate and concrete support to scaffold this viable industry until it is able to safely return to capacity in all its glory”. As well as welcoming the Department of Culture’s new live entertainment fund, it said budget measures including the VAT decrease, clarification that PUP recipients can work occasional days without losing payment, and support for grass roots including musical societies, drama societies, stage schools and dance schools, were “big steps in the right direction for reopening”.

But Epic was very concerned about the budget’s CRSS scheme, designed to support businesses in accommodation, food and the arts, recreation and entertainment who have had to prohibit or restrict access to customers due to Level 3 or higher restrictions. It pointed out that the CRSS excludes specialist SME businesses represented by Epic because it’s not open to them as they don’t have public-facing businesses.

The specialist SMEs include audio and lighting suppliers, staging, health and safety consultants, specialist security, providers of fencing, sanitation, site services, power, public relations and marketing companies and other suppliers to the diverse sector. Epic said restricting applications to Level 3 and above “prohibits many of them who cannot operate regardless of the level. There is nothing in this budget for these key cornerstones of the live industry. Without these suppliers, there are no concerts, no festivals, no events, no outdoor shows. The very welcome €50 million to the department of culture will go unused if there are no SMEs to work at these shows.”

Replying to questions about the general cross-sectoral scheme at the arts briefing Minister Martin observed of the CRSS, “it’s for arts, hospitality and accommodation. As we go along we’ll see how broad that is.”

Epic’s statement points out “It has been 215 days since employers, workers and freelancers from viable operations in the live entertainment and events industry were mandated to close. The non-funded event industry supports over 35,000 jobs, contributes over €3.5 billion to the economy and in excess of three million annual bed nights to the wider tourism sector.”