Kylie Minogue: The diva next door

The Australian singer has masterfully cultivated the image of the Garbo of Pop, living by the old school maxim of ‘never complain, never explain’ 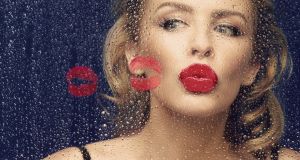 Kylie Minogue Kiss Me Once.

There is a now familiar gif that appeared on Twitter mere minutes after Kylie Minogue’s Glastonbury conquering performance that captures her reaction as she turns to the crowd for the first time.

It’s a shot of the singer standing, microphone in hand, surveying the musical field of dreams. Her face, one of studied showbiz blankness briefly slips into a look of shocked surprise at the sizeable crowd before she quickly shakes her head, unfurling a grin that is midway between pride and disbelief.

Distilled in that fleeting moment is the very essence of Kylie Minogue, the enduring Princess of Pop. Unlike other celebrated singers who thrive on appearing calculating and overly confident, there is something almost modest about Minogue, her persona is that of The Diva Next Door, the personable pop star who is acutely aware of her place in culture.

Sunday afternoon on the main stage at Glastonbury is known as the “Legends” slot, usually reserved for acts of a certain vintage willing to dip into their extensive back catalogue to generate a very English singalong. Within the feel-good factor and excitement of seeing Dolly Parton or Dame Shirley Bassey blast out their hits, there is a touch of condescension lying beneath, as if this section of Glastonbury is temporarily cordoned off for those to enjoy some kitsch pop fluff amid the serious and sacred business of “real” music.

By rights, an act of Minogue’s calibre should have been granted a Saturday night headline slot, something that could have matched the towering performance given by Beyoncé in 2011.

She may have created an album inspired by Dolly Parton (by way of disco) with Golden last year but the singer is hardly of the same generation. To place the star, who is still creating and releasing new music, in the same space as these mostly mothballed heritage acts is an unfair assessment of her lengthy and varied career.

She has proven time and time again to be a glorious shapeshifter, moving within genres including working with acts as diverse as Nick Cave, Tove Lo, Pharrell Williams and noted producers such as Nelle Hooper and Stuart Price.

She has been the inspiration and the subject of creative projects for the most ice-cool photographers and designers and has gifted the pop world with truly transcendent moments such as Can’t Get You Out of My Head and I Believe In You. She is a vocal LGBTQ ally and breast cancer spokeswoman and yet she has never been afforded the same in depth appraisal as her contemporaries.

For some, her career amounts to nothing more than a pair of tiny gold hotpants

Whereas Madonna has had a library full of critical theory written about her, including Susan Faludi examining her body and physical presence within her videos, Camille Paglia has put Lady Gaga under the microscope in relation to feminism and there has been a myriad of think pieces about relatively new stars from Lana Del Rey to Beyoncé very little discussion has surrounded the impact of Ms Minogue, until now.

On the weekend of November 15th-16th Maynooth University will hold a Kylie Symposium, an academic conference that aims to critically examine the star’s status as a cultural icon. Taking in wide-ranging themes and perspectives including Kylie and ideas of authenticity in pop, her courtship of French culture over the years, our obsession with the celebrity ageing process and her affinity with the avant garde and contemporary art.

Conference organiser and senior lecturer in Maynooth University Department of English, Dr Stephen O’Neill says that Kylie was chosen as a subject because of the longevity of her career as well as it being “a look at Kylie’s status as an older pop star and what it means to negotiate age and femaleness in the pop industry.

“We’re also interested in Kylie’s status as a breast cancer survivor and the ways in which her disclosure of her illness prompted women in Australia to get themselves checked. Contributors to the conference are addressing these themes but also helping to put Kylie’s career into context, to analyse her live performances, and to bring different perspectives, from music studies to queer studies, to her body of work.”

There is also the additional dimension of “the perception of her as “bubble gum” pop and a kind of sneering attitude – as the media hysteria around the Taoiseach’s recent moment of Kylie fandom instances. Kylie constitutes fascinating areas of cultural meaning – her songs and especially their audio-visual treatment through iconic videos are, for many people, bound up with memories, and the songs become synonymous with points in a life.”

Perhaps because of her manufactured roots and her genial character, there is a lack of understanding of what Kylie represents or who she is. Over the years she has masterfully cultivated the image of the Garbo of Pop living by the old school maxim of “never complain, never explain” which has created an alluring mysteriousness around her seemingly everywoman persona. In Sylvia Patterson’s book I’m Not With The Band detailing her time in pop journalism, she says that having interviewed Kylie several times over the years and as polite and professional as the singer is, she tends to divulge mostly the same information.

Kylie is not from the "tell all" age of social media, she’s not fodder for the Daily Mail’s Sidebar of Shame and other than her brief dalliance with Michael Hutchence and her disastrous relationship with obscure actor Joshua Sasse, she has rarely been of real interest to the tabloids.

She may have surrendered part of herself, transforming into the crowd pleasing show pony but after 30 years of hits she doesn’t have to prove herself any longer

With this guardedness, her outward image displaying the eternally sunny pop star, she has managed to execute a cunning sleight of hand where it appears that we have intimate knowledge of her but ultimately she remains aloof and unknowable. There is a hint of steeliness under the gloss which is fascinating.

Dr. O’Neill agrees that “Minogue’s own carefully crafted public image suggests an attitude to life and the world that is as valid as any other. There is a sense in which she has been massively underestimated and dismissed but she has proved resilient and 80 million record sales later, continues to belt out the songs.”

For some, her career amounts to nothing more than a pair of tiny gold hotpants, a camp fixture in pop but Kylie can never be written off. Her resilience was formed at a time when the unforgiving music press mocked her desire for agency.

A whole year before Madonna decided to get personal on the Ray of Light album, Kylie drafted in self-proclaimed “culture sluts” the Manic Street Preachers and DJs Todd Terry and Towa Tei to help with her Impossible Princess album (retitled as Kylie Minogue after Princess Diana’s death) .

It may have been commercially unsuccessful but this period yielded the artistic freedom she desperately craved and formed an important aesthetic basis for her later work. It was at this time of insecurity and confusion due to the public reaction to her new direction that she found strength and faith in her choices, writing her own lyrics, working with her photographer boyfriend Stephane Sednaoui on challenging, directional looks as well as taking a chance and hiring the one time Vivienne Westwood shop assistant, William Baker as her new creative director.

A huge breakthrough was in 1996, when Nick Cave asked her to read the lyrics of I Should Be So Lucky at his literature night at the Royal Albert Hall, it gave her licence to be ironic and arch – playing up to her role as the superficial ex-soap star but it also gave her the confidence to accept who she was, a true pop idol.

While she was being pillared by both the tabloid press and the indie press alike, this tumultuous period set in motion the rebirth of the multi-faceted star that we see today. From then on she staged a homecoming of sorts, returning to the pop world and endeavouring to become an indelible pop icon.

She may have surrendered part of herself, transforming into the crowd pleasing show pony that keeps an audience in the palm of her hand but after 30 years of hits she doesn’t have to prove herself any longer. The repeated line of “Stay forever and ever and ever” from Can’t Get You Out of My Head feels like prophetic symbolism. The sly smile that crept across her face on that summer afternoon in Avalon now seems to triumphantly state “What took you so long?”