John Grant: ‘I always wanted to be the silent strong type, but I couldn’t keep my mouth shut'

Ahead of the release of his new album 'Grey Tickles, Black Pressure', John Grant comes clean about the highs and the lows, and all points in between 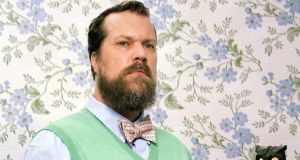 John Grant: “When I write my songs, I’m writing about the pain, the joy and the ridiculousness of being a human... about one tiny little experience of what it’s like to be a human on this planet." Photograph: Michael Berman.

Call it a case of deja vu: John Grant is talking and we’re listening. It’s apt that one of the finest, most articulate songwriters in the game can also talk up a great head of steam.

Just prompt him and he’ll talk candidly for days. Here’s one: is John Grant a hard person to live with?

“Yes, but I’m also a fun person. I think my partner really struggles sometimes with the rollercoaster I’m on because I take all sorts of different prescription medication. I take HIV medicine, I’ve been on the same anti-depressant for over 20 fucking years, and it doesn’t seem to work any more. I find myself in this strange space and experiencing this emotionality where it’s actually the drug wearing off a lot quicker than it used to and it’s fucking with my head and my heart. But I’ve also got kindness, compassion, communication, and an ability to respect someone as they are and not try to change them. If you expect someone to put up with you and all your bullshit, you have to do the same for them.”

The reason for today’s encounter with Grant in a tent in a field at the Galway Arts Festival, is the new record from the man behind the albums Queen of Denmark and Pale Green Ghost s. Grey Tickles, Black Pressure sets out its stall from the title, the first part taken from the literal Icelandic translation for mid-life crisis and the second the direct Turkish translation for nightmare.

Between the musical span of tart ballads and fizzy electro-pop, Grant dissects and deconstructs the stuff of the human condition with bite and wit. It’s a job he’s well suited to.

“When I write my songs, I’m writing about the pain, the joy and the ridiculousness of being a human. I don’t feel like I’m writing music for gay people, I’m a gay man who is writing music about one tiny little experience of what it’s like to be a human on this planet.

“You’re speaking a universal language and your story matters as much as it doesn’t matter. You need to keep hold of that perspective, which is something I’ve sometimes found hard to do.”

Grant’s life has been well mapped out, chiefly because he’s never shied away from talking about it. It takes in a troubled childhood filled with homophobic bullying, a spell in the critically acclaimed but largely ignored Denver band The Czars, heavy days of dazed drinking and drugging and a return to music when Texan band Midlake persuaded him to record his debut album Queen of Denmark.

The highs and the lows have been many. For all the giddy success of the solo albums, there has been the fallout from messy cocaine binges, alcohol dependency and self-destructive behavior to deal with.

“I come from a position where it seems like I have an addictive quality to everything in my life,” he says at one point. “Money, sex, food, drugs, alcohol – it seems like it always has to be the full whack.”

Therapy helps. “I’ve kept going to therapy to find out why my perspective is so skewered, and why I’m filled with rage. It’s so I can live in this world alongside these other people who seem to be what is desired and what the world wants.

“I don’t go to therapy to gain insights, I go to get specific tools to beat that feeling when I regress to being 12 years of age again because of some trigger. I don’t want to cause any more damage, I want to be respecting myself, I want to love and be loved.

“AA is good therapy too, actually. When you go into those meetings, you don’t know what you are going to hear when you have people from all walks of life coming together to talk about being broken and addicted and having to let go of that and start from scratch.”

One of the themes criss-crossing the new album is masculinity.

“I know you’re not supposed to talk about your emotions as a man, but I’ve broken all the rules in every other area so what’s another one?” Grant says. “I always wanted to be the silent strong type, but that was never going to happen because I couldn’t keep my mouth shut.

“I see men working here [pointing towards the festival stage outside] and I look at them. Now, that’s what I was taught a man looks like and does and is supposed to be. It always pissed me off that people said they always knew I was a faggot. I was so insulted. What does that mean? Was it because of how I talked? How I walked? How exactly did you know that? That filled me with rage.

“It’s interesting how the world tells people who they are, like the whole Bruce Jenner becoming Caitlyn thing. That’s a strength I can’t even imagine, going through that in public. I look at that picture of him from the Olympics and he’s my idea of the man. There’s obviously something going on inside of people which transcends all of this talk and I wanted to address this.”

When Grant talks about songs on the album, his mind sparks with many different ideas.

“You’re coming from so many different angles with songs that you say different things at different times to the same question, because on a given day, you’re coming at it from a different place. New things pop up in your head all the time.”

Or even loads of things at the same time. Grant’s deconstruction of Snug Slacks covers “the objectification of people”, “ingratiating yourself with someone so you can have sex with them”, “the over-sexualisation of our culture” and how he has made it “very difficult for myself to be intimate with a human being and experience real intimacy” in the course of a 10-minute answer.

Other songs can be sliced and diced in a more straight-ahead way. Geraldine sees him talking to the late Geraldine Paige about how she dealt with life.

“I always loved character actors more than big stars,” he explains. “Geraldine Paige became one of my favourites through Woody Allen’s Interiors. You see this woman grappling with losing her husband to another woman, with depression and with wanting to commit suicide.

“Wanting to commit suicide is a horrible lie that people get stuck in and trapped. I’ve been there, I’ve fantasised about committing suicide and ending everything because I didn’t think I could understand everything. It wasn’t that someone left me – though that hurt – but it was that I couldn’t get my head around it.

“I was much younger when I saw the movie, but I felt a connection because she was bereft, she couldn’t imagine living without her husband who was tired of her drama and went off with the next bright young fuckable thing. In the song, I’m talking about me not fitting in and talking to her in a very funny way about if she had to put up with this bullshit as well. Songs are a great way of having conversations with people I never met who are dead.”

Who else would you like to talk to? “Gilda Radner, Madeline Kahn, Elaine Stritch, she was a real powerhouse.”

He pauses. “They’re all women, aren’t they? See, men are too busy putting this thing out there of being a man, too busy putting walls up. You’ve got these women who were told they’re low on the priority list, unless it’s about fucking, and who were bold and ballsy and took the men on and were hilarious.”

He pauses again and smiles. “Man, I was just overthinking my reasons for that list. Even I find my overthinking of everything to be annoying sometimes.”