Joe Lovano: ‘A lot of the music today is computer driven – a numbers racket’ 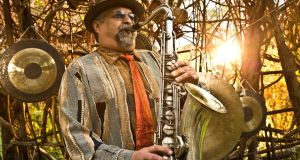 Joe Lovano: “This current scene is going to be behind us very soon. We have to stay strong and believe in the universe.” Photograph: Jimmy Katz

You might say that Joe Lovano was born with a silver saxophone in his mouth. His father, Tony ‘Big T’ Lovano, was a respected amateur saxophonist in the Cleveland area, a barber by day but by night, a respected jazz musician who shared a stage with some of the biggest names in the music, including be-bop pioneer Tadd Dameron and saxophone innovator Stan Getz. Born in 1952, Joseph Salvatore Lovano grew up in a house where saxophones were part of the furniture.

“I was really fortunate”, says Lovano firmly. “My Dad grew up in that generation, the same age as Coltrane and Miles. He heard Charlie Parker play, he heard Lester Young live in the room, he jammed with Coltrane!” He pauses to let that sink in. “Those experiences were really powerful man, and as I was growing up, he was telling those stories and he had all the records”.

But there is something else in Lovano’s sound - a big-hearted romanticism that distinguishes him from many of his more Anglo-Saxon colleagues - which he attributes more to his mother’s influence.

It’s not so much playing the saxophone as trying to play the music, and to follow the sound in the music

“I grew up in a total Sicilian Italian-American family,” he says proudly, “and Mario Lanza, Enrico Caruso, Louis Prima, Frank Sinatra, Tony Bennet, there was always a lot of vocal music around me. My Mom, and my aunt Rose, all my family was into that whole lifestyle, and I was influenced by the way those singers sang. I think Caruso was the ultimate as far as that majestic quality of delivery. Then later, as I started developing in jazz, I read a book about Louis Armstrong, and he would carry Caruso 78 records on the road with him. If you listen to Louis Armstrong play a melody, you can hear that majestic delivery inspired by Caruso. It tied a lot of things together for me, when I was growing up, trying to play like a singer.”

It’s an approach to melody, a rare ability to ‘sing’ with his horn, that has made Lovano one of the most respected – and most imitated – saxophonists of the post-Coltrane era. In particular, his playing with legendary drummer Paul Motian’s trio, which also included guitarist Bill Frisell, is suffused with a yearning, romantic quality that made the Motian trio one of the most influential groups of the last quarter century.

“We played like a little orchestra,” he says of the bass-less trio that was a major part of his life from the early 1980s until the great drummer’s death in 2011, “and my role was really to sing the piece of music we were playing. That taught me a lot, and it has stayed with me”.

“Sometimes your instrument can overpower you,” he continues, “and having that approach really gave me a lot of different ideas. Now it’s not so much playing the saxophone as trying to play the music, you know, and to follow the sound in the music.”

Today, traces of that sound, and of Lovano’s liquid phrasing, can be discerned in most of the saxophonists that have come after him, and he has himself become a vital link in the continuum of the tenor saxophone that he so reveres.

“So many influential instrumentalists in the most expressive way have been saxophone players”, he says with the enthusiasm of a teacher. Though he probably doesn’t need the money, he still spends part of every year teaching at Berklee College of Music in Boston. He reels off the names of some of the greats who influenced him, name-checking Coleman Hawkins, Lester Young, Sonny Rollins, Johnny Griffin, Don Byas and Lucky Thompson, “You have such a rich library, what I call ‘the sound and spirit of the masters’,” he intones, “and when you live in the library of the sound and spirit of the masters, for me that’s a very beautiful place to be.”

One master in particular is on his mind these days. Sound Prints, the band he co-leads with New York trumpeter Dave Douglas (see panel) is in many ways a homage to Wayne Shorter, named for the great saxophonist’s iconic composition, Footprints. Musicians are often happiest talking about themselves, but Lovano is unfailingly generous in praise of others, and was clearly thrilled when Shorter heard the band and offered to write some music for them.

He gave us an open door to interpret his piece the way we felt it, he gave us so much respect and embraced our approach. Wayne Shorter, man, he’s something else

‘To get to know him, and play some concerts with him, you know, he is one of the most pure and magical improvisers and composers in the music, ever” he says. “We played opposite him in Europe, and he heard our band, and he said ‘Oh man, I want to write something for you guys”. He gave us the two scores, one was like nine pages and the other was seven pages, in his handwriting, you know, and just beautifully scored out. So he’s looking at the music, and he points at this one passage, and he looks at me and says ‘that’s just a suggestion’.” He laughs at the notion of jazz’s greatest living composer offering him such latitude. “He wanted us to take things and turn them into our own music. He gave us an open door to interpret his piece the way we felt it, he gave us so much respect and embraced our approach as individuals. Wayne Shorter, man, he’s something else”.

In his turn, Lovano is clear about the importance of passing on the music and the sense of community to another generation.

“Were all living in the moment of now, trying to move it with our personal experiences as the driving force, you know, and that’s the essence of real jazz, of players that try to communicate with a spontaneous edge, and also with the knowledge and wisdom of the masters that we’ve learnt from, and that’s what we’re trying to do in this band.”

Lovano turns 65 this year but there is no question of retiring or slowing down.

“Well, you know, travelling is hard, it’s rough. You have to be really healthy and sober and totally focused to be strong on the road. That’s a whole thing about who you are, and your lifestyle. But one thing in the music, in the international scene today, there’s more opportunities to play, and in the jazz educational world that’s so huge right now, there’s a lot of opportunities to share the blessing with all kinds of folks all over the world, and that’s what drives me, man, is that whole idea of sharing the blessing.”

Not that he’s feeling particularly blessed about the political scene at home.

“Well, I find it difficult watching the news”, he says with a sardonic laugh “and the current reality of the people that are in charge of dictating what they think it should be for the whole world, and the arrogance and the awful ignorance that’s going in is really something man that has to be addressed. But we’re lucky that things change,” he says, striking a typically optimistic note, “and they change fast, man. This current scene is going to be behind us very soon. We have to stay strong and believe in the universe. Everything is good, man.”

A new Sound Prints recording, Scandal, hits the shops this month, but the title isn’t just a reference to the US political scene.

“A lot of the music today is computer driven - I call it the numbers racket - and there’s no room for personal, soulful expression. It’s a trippy thing man, so we’re trying to play from a soulful place. We dare to improvise and create new music within the music, and that’s kind of a scandal too.”

Bray Jazz Festival may be small in size but big on artistic credibility with its sights firmly fixed on the jazz horizon. The challenge is trying to fit it all in.

Unlike many bigger and better funded jazz festivals on the island, Irish-based creative musicians get a fair shake at Bray. It’s all good, but look out in particular for weirdly wonderful songs from Riona Sally Hartman (Friday, 8pm); large ensemble gorgeousness from Linley Hamilton, Cian Boylan & The Camden Orchestra (Saturday, 3pm); sounds of the future from Umbra (Saturday, 3pm); sounds of the underground from ZoiD (Saturday, 8.30pm); and mashed up surf sounds from Mushburgers (Sunday, 8.30pm).