From Berlin to Dublin, bringing opera back home 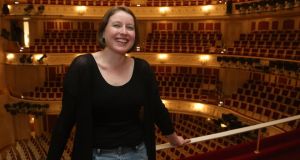 Three hours to curtain at the Staatsoper Berlin and the stage is still not set. Instead, two dozen stage-hands – with apparently all the time in the world – are joking amongst themselves as they click together the shiny black floor panels for The Magic Flute.

Watching from the wings, between the graffitied set of last night’s Falstaff and costumes for Sunday’s The Turn of the Screw is Caroline Staunton. The fluorescent work light banishes any hint of stage magic. Just another day at the office.

“There’s nothing supernatural about opera, it just takes an awful lot of hard work,” says the 39-year-old Dundrum native. As assistant director at the Berlin State Opera since 2014, she has worked with and watched some of the biggest names in the business: Domingo, Netrebko, Villazón. Her long list of revival productions under her belt at the state opera run from Tosca and Freischütz to Don Giovanni and Tristan und Isolde.

If a singer gets sick, it’s her job has to find a last-minute replacement – or, if necessary, even don the costume and walk through the performance while someone sings offstage. “The moment before you have to go on-stage is the worst feeling in the whole world but once I’m on I basically just do it,” laughs Staunton who also runs her own pop-up opera company called Puccini’s Toaster.

Hopping down from the stage, she strolls past the empty white seats with pink satin cushions towards the back of the compact auditorium. An explosion of stucco and gold-leaf, the place still smells of fresh paint and putty after a recent, marathon renovation.

“Amazing how intimate it is,” she says, counting the rows in the stalls to 18. “In Convent Garden you’re so far away from everything.”

Though far away from her home town – 1,700km to be precise – Staunton has watched with interest Ireland’s opera revival and is now contributing to the ambitious new Irish National Opera (INO) season.

The short piece fizzes with musical Mozart bubbles and tells of two competitive sopranos auditioning for one role. After assisting last year at Wexford Festival Opera, this is her first full work in Ireland.

For the occasion, he has added a few Irish twists to her rewritten libretto, such as renaming the tenor Michael Kelly in honour of the Irish friend of Mozart who starred as Don Basilio in the original production of Figaro.

For Staunton the piece reflects on the constant sacrifices and pressure of the creative life, and the arbitrary decisions that can make or break a career. “In an audition someone has to decide they believe in you,” she says. “but it’s almost impossible to predict what the criteria are.”

These are pressures not exclusive to performers, a point she makes by having Mozart lurk around the stage in her production. “It’s tragic that even someone like Mozart, who gave us all this glorious music, spent his last years trying to borrow money, find work and then died at 35.”

For Staunton, her piece tackles – with humour – the cliché of opera singers’ sense of entitlement and that unforgiveable faux pas in Ireland: people perceived to have “notions” about themselves. “Opera is a complete lifestyle, you have to think about it every second of every day,” she says. “Performing, travelling, living out of a suitcase, deciding against that second glass of wine because you are singing the next day.”

Working for one of Europe’s premiere opera stages was never part of the plan when she studied English and philosophy at UCD, followed by a Master’s there in drama studies.

Tackling Mamet and Albee in Belfield, Staunton soon realised she preferred directing to performing and, as an English teacher in Gonzaga College in Dublin, staged the annual show and mentored students to broaden their minds beyond rugby and the Leaving Cert. “It was about giving them an opportunity to understand that an encounter with art is theirs for the taking,” she said.

We’re strolling through the state opera’s brand-new backstage area and pop into the airy rehearsal room of the world-famous Staatskapelle Berlin. While other operas have their phantom, Berlin’s state opera has Daniel Barenboim. A former child prodigy who gave his first performance at seven, Barenboim is a revered figure in classical music circles – with a reputation to match.

But in the working environment, says Caroline Staunton, the Argentinian-Israeli maestro is a “very collaborative person”. “Barenboim is a genuine musical theatre creator,” she says, “someone who looks at the stage and you can tell it’s important to him.”

Classical music was always important in her life, if in the background: from her drummer father’s love of classical music to the opera playing non-stop in her grandfather’s house. Her own road to opera began when she saw Rough Magic’s acclaimed production of Schiller’s Don Carlos, then productions of Verdi’s opera version in London and Paris.

After asking a director she admired for an an internship, she found herself working at the Salzburg Festival in 2010 and, after a detour to Freiburg, at the Staatsoper Berlin in 2014. She hasn’t looked back. “You’d think the constraints of the music hamper the director,” she says, “but the music contributes the real revelatory aspect.

There is absolutely nothing that can compare to a good evening of opera.” Good evenings at the opera in Ireland have been scarce of late, viewed by many less as an organic art from than a decorative tin that is opened on special occasions. But change is in the air: Wexford’s name is spreading across the continent where almost every major house offers Irish talent like Tara Erraught, starring in INO’s Figaro but based at Munich’s state opera.

“Opera in Ireland was viewed as an unnecessary luxury and constantly having to justify its existence,” says Staunton. “But now I get a sense it is a thing Irish people do and not something imported, extra or fake.” Allowing a pragmatic exchange between Irish opera professionals at home and abroad will, she hopes, provide a tide to lift all boats.

“Opera doesn’t lend itself to parochialsim: it’s international, without borders,” said Staunton. “If going to Germany means you can earn a salary and pay the bills, you also pick up invaluable skills and can come back to help create opportunities for people at home.”

But building up opera in Ireland starts with building an audience. And where better to start than with an accessible, short work like The Opera Director – in German but with English surtitles and songs bedded down in spoken dialogue.

For Staunton the greatest part of this project, besides working in Ireland and at the Gaiety, is that the free performance may attract people who might not be able to afford an opera, or feel intimidated by the form.

“Don’t go in thinking opera is something difficult or unusual, just go in with an open mind,” says Staunton. “It either grabs you or it doesn’t. But if it doesn’t, do give it another chance.”

‘The Opera Director’ is a one-off free, ticketed event at the Gaiety Theatre as part of MusicTown 2018 on April 21st at 3pm. Tickets are available now in person at the box office

Eric Clapton opens up – even on his bizarre racist period
8