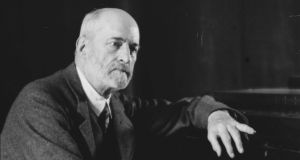 The recent transformation of the fortune of the Irish-American composer Swan Hennessy has been remarkable. If you haven’t heard of him, don’t be surprised. He’s one of those composers whose name virtually disappeared after his death in Paris in 1929.

To be fair, he had already left a footprint. But for years I never even registered his name in books on my own bookshelves. He’s mentioned in Arthur Eaglefield-Hull’s Modern Harmony (1914), which included a movement from one of his string quartets as an example of the use of quintuple time and an Étude for piano as an instance of “varied times” – the piece is written in 2/4 in the right hand, which is set against 5/8 in the left. And in 1929 he was covered in that highly specialised, highly revered survey Cobbett’s Cyclopedic Survey of Chamber Music.

In 1957 he merited a full column in the major German encyclopedia Musik im Geschichte und Gegenwart. In the late 1960s he got a brief, unflattering mention in the third volume of William S Newman’s monumental History of the Sonata Idea, and he also had a two-column-inch entry in Marc Honegger’s 1970s Dictionnaire de la Musique, Les Hommes et Leurs Oeuvres (man, what a title!). But Grove, the major English-language music dictionary, has never paid attention to him, and the 2013 Encyclopedia of Music in Ireland moves straight from Christie Hennessy on to Ian Henry.

The Hibernophile German musicologist Axel Klein has now made good the neglect, with a nearly 600-page study, Bird of Time: The Music of Swan Hennessy, from the German music publisher Schott.

Hennessy, a composer of piano and chamber music and songs, is not straightforward to characterise. He born in the US in 1866 to a father from Cork. He was educated in England and Germany and lived much of his life in Paris, where he indulged his Celtic connections in music. In 1912 he even became a member of the Association des Compositeurs Bretons.

The apogee of his musical profile in Ireland came in the 1922 when his Second String Quartet, in memory of Terence McSwiney, was performed at the politically divisive World Congress of the Irish Race in Paris and later also in Ireland. That quartet, in the hands of the ConTempo Quartet, has been spearheading the revival of interest in his work, in concert and through their recording for the RTÉ Lyric FM label.

The composer seems to have been if not secretive then at least uninterested in preserving much information about his life and personal activities as opposed to the progress of his musical career. So it’s hardly surprising that much of the biographical information you might assemble from the available published sources is both misleading and contradictory.

Klein’s book is like a kind of academic musical detective story, a story with little enough evidence at times that it requires amounts of deduction and guesswork. It’s easy to understand why the composer might have wanted to put a distance between himself and his short first marriage to Lucy Roper from Roscommon. Although the couple had two children, the marriage ended in divorce when the composer was 26. Klein describes him as a womaniser.

Hennessy was not a professional composer or even a professional musician, in spite of his conservatory training. He was an amateur who had a package of freedoms that composers putting bread on the table simply do not have. In his case this allowed an 11-year, post-divorce gap during which he wrote little and published no new music, although he was paying alimony.

Most of his later adult life seems to have been spent in a symbiotic relationship with his wealthy father, who spent much of his retirement in Europe. Klein declines to adjudicate on the balance that was struck between the health needs of the one and the financial obligation of the other. Either way, Hennessy never had to compose, perform or teach for a living.

His earliest work showed the influence of Schumann, and he later came under the sway of impressionism before arriving at the pieces with Celtic connections for which he is now best remembered. Yet his most successful work was his five volumes of pastiches, À la manière de… (1926-27), which began with Brahms and Franck and ended with, of all people, himself.

Klein’s painstaking if sometimes stiffly written book is a major study of a minor figure, and seems to have been written out of an overflowing enthusiasm for a long-forgotten man who cherished his Irish connections more than Ireland has ever cherished him or his work. The goal seems to have been to provide a wealth of finely detailed information that will be of benefit to anyone – music lover, performer or musicologist – who wants to take up the cause.

Klein intersperses the biographical and career narrative with music analyses that touch on virtually everything Hennessy wrote. His appendices even include a list of “Related repertoire” pieces by “Hennessy’s Breton composer-friends”. Klein is clearly offering companion pieces for anyone interested in placing Hennessy in a thematic recital programme.

If Hennessy’s profile doesn’t rise further as a result of this book, it certainly won’t be for want of Klein trying.