Ireland’s forgotten violinist who was buried at Glastonbury

Maud MacCarthy, originally from Clonmel, sought music from across the globe 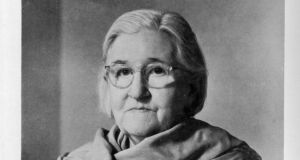 It was when I was working on the book, The Invisible Art, A Century of Irish Music, 1916-2016, that I first registered the name Maud MacCarthy.

She was an Irish musician who was born in Clonmel in 1882 and died, a month short of her 85th birthday, in Douglas on the Isle of Man in 1967; she was buried at Glastonbury.

The context in which I came across her would give her a special place in Irish musical history. I was trawling for 20-century achievements by Irish musicians and composers.

I discovered that MacCarthy appeared as a violin soloist with two of America’s greatest orchestras.

This is an achievement that has not yet been replicated by any later Irish string player.

Her family emigrated to Australia when she was two, but she returned to Europe in 1892 and studied with the Spanish violinist Enrique Arbos, a celebrated player in his day who is now best remembered for the orchestrations he made of five pieces from Albéniz’s Iberia.

She made her London debut in 1894 and her playing was favourably noticed in The Musical Times. The biography printed in the Boston Symphony Orchestra’s programme says she first played on the far side of the Atlantic in 1898 and made her US debut at a Metropolitan Opera House concert. The biography also mentions appearances in Germany, Scandinavia and Italy.

Her entry in the 1954 edition of Grove’s Dictionary of Music and Musicians says that the conductors she worked with included giants of the day, August Manns, Hans Richter, Henry Wood, and Artur Nikisch.

Unfortunately, her career as a violinist was cut short by neuritis, but she remained musically active in other areas.

Those other areas are disparate enough to take your breath away. She was not listed in the final printed edition of Grove, which was printed in 2001.

But Grove Music Online finally made up the dictionary’s deficiency in September through an article by Nalini Ghuman, Associate Professor of Music and Affiliated Asian Studies at Mills College, Oakland, California.

Ghuman’s most recent book, published in 2014, is Resonances of the Raj: India in the English Musical Imagination, 1897–1947, and her biography explains that it “examines the ramifications of the ‘intertwined and overlapping histories’ of Britain and India on English music in the first half of the twentieth century by examining six significant figures – Maud MacCarthy, Gustav Holst, Kaikhosru Sorabji, Edward Elgar, Amy Woodforde-Finden, and John Foulds. ”

The reach of MacCarthy’s interests can be gauged from the length of the list of names Ghuman provides for her. As well as her birth name they include Maud Mann and Maud Foulds (through her marriages to theosophist William Mann, and the English composer John Foulds), Tandra Devi (under which she published poetry and founded an ashram in London), Swami Omananda Puri (under which she wrote an autobiography) and Maud Coote (taking the surname of William Coote, who she married after Fould’s death).

Her autobiography, The Boy and the Brothers, which was published in 1959, is subtitled “A young untutored Londoner in the service of higher powers”. “The Boy” is Coote, who was working in a gasworks when MacCarthy first met him. The book includes a picture of him “when a ganger stoker, a few weeks before he began teaching and healing”.

MacCarthy’s studies in India, which she first visited in 1907, covered music and musical performance and also mysticism. She mastered Karnatic classical singing, could sing in scales with 22 notes to the octave, and was praised for her achievements by Indian experts.

She claims to have coined the word microtone, based on her experience of Indian music, apparently to make clear that quarter-tone was an inadequate way of describing the number of possible musical intervals smaller than a semitone.

She compiled the text for John Foulds’s World Requiem, a large-scale Armistice Day commemoration, which was performed at London’s Royal Albert Hall as part of a Festival of Remembrance in the 1920s. In that context, Ghuman credits her with the description Festival of Remembrance, which is still in use today.

She was early in the field of music therapy and the firsts that Ghuman records include “the earliest recorded instance of creative interaction between Indian and British musicians” (in her incidental music for Niranjan Pal’s play, The Goddess in 1922), and “the first known broadcast of Indian music in Europe” (for the BBC in 1926).

She wrote the music for the first performance of Yeats’s At the Hawk’s Well, and was among the musicians who played in that performance at Lady Cunard’s drawing room in 1916.

She was also an influence in the personal life of the phonetician Daniel Jones, who is claimed by his biographers, Beverley Collins and Inger M Mees, as the original for Professor Higgins in George Bernard Shaw’s Pygmalion. Jones, they write, “had been convinced of the inevitability of an approaching holocaust since the beginning of the 1930s, having received ‘warnings’ to this effect at seances organised by the mystic Maud MacCarthy and her medium ‘the Boy’ .”

Jones even wrote a blurb for the dust-jacket of her autobiography.

“It’s been my privilege to know Swami Omananda for close on 40 years. I’m therefore able to vouch for her integrity and the truth of what she’s written. I also knew well her late co-worker whom she calls the boy, a man of high ideals for whom I had great respect. On several memorable occasions I’ve been present when teachings such as those recorded in Swami Omananda’s book have been given out by him in the manner described.”

The space between Jimmy McCarthy and Hercules MacDonnell may be blank in 2013’s Encyclopedia of Music in Ireland. But I suspect we’re going to be hearing a lot more of Maud MacCarthy and her achievements in years to come.

A poetic response to the pandemic
9