Years of thankless touring and ignored albums have worn his patience thin, but Thomas Walsh hopes his new Pugwash album will set the record straight 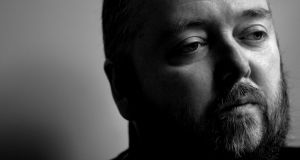 Thomas Walsh: “I thought there was one record in me that I should make for myself.” Photograph: Graham Keogh

In a world of media-managed pop stars, blander-than-beige musicians and so-called rock stars too afraid to stick their heads above the parapet for risk of offending someone, Thomas Walsh is a beacon of bluntness. Set your swear filter to “Gallagher”, kids: the man behind Pugwash has plenty of stories and he’s not shy about recounting them in very colourful terms.

“If I was growing up now, I’d be bored shitless,” he says, shrugging as he gulps from a mug of tea.

“I know things change and I’m happy with so many of those changes, but there’s a sheen across music now. It’s all far too . . . nice.”

Walsh’s outspokenness has got him into trouble before. Over the course of an hour-long lunch in the corner of a Dublin city centre pub, the Drimnagh native amusingly eviscerates plenty of people and organisations.

There are the spats with his fellow musicians – “I hate the fact that musicians aren’t allowed to give opinions about each other. We’re supposed to all embrace this ‘We are the World’ f***ing scenario”; there are the spats with promoters –  “He told us, ‘You’re not getting that support slot,’ so I said ‘F**k you, you’ll have to drag us from the building’; and festival bookers – “They said, ‘We can’t pay you, but it’ll be good for exposure.’ I said, ‘I’m 20 stone and I’ve had six albums out. I’ve just had an Ivor Novello nomination and a Top 40 UK album with Neil Hannon – I’m okay for exposure’.”

There’s even time to weigh in on Bob Geldof handing back his Freedom of Dublin award: “I’d love him to be giving out about Kings of Leon, or some shit band headlining a festival, instead.”

Walsh might be dismissed as little more than a mouthpiece if he didn’t have the musical credentials to back the bluster up. Silverlake, his seventh album under the Pugwash banner, is another fine collection of breezy, sun-dappled pop songs in the classic vein of the bands he loves – ELO, The Beach Boys and The Beatles are all in there.

Yet as sunny-side-up as the album sounds, its creation wasn’t without its troubles. The stress of touring – financially, physically and emotionally – took its toll after the release of 2015’s Play This Intimately (As If Among Friends).

“I really didn’t want to make another record, because it was taking too much out of me,” he says. “It’s the seventh album, and we’re still not getting offers from festivals and stuff like that. I’m not some kind of pariah; they just don’t bother. So that adds to the pressure of making more records. I thought, I’ll get a job, f**k it. I’m still thinking about that. It’s just too hard. But I thought there was one record in me that I should make for myself, with someone I really, really respect – and try to make Pugwash sound as poppy as they could ever be.”

That pressure has contributed to the fraying of friendships with his three former bandmates, Tosh Flood, Shaun McGee and Joey Fitzgerald – so much so that Walsh decided to disband Pugwash and continue as it was for the first four albums, as a solo vehicle.

“We’re as close as can be, but we were trying to live the dream and trying to fulfil wonderful fans’ dreams of getting to places like America, and doing two- or three-month tours at 46, 47 years of age – unhealthy and in bits, with no money whatsoever,” he says. “We did that for three years, twice a year – and it killed us, absolutely demoralised us. We just all turned around to each other and said, ‘We can’t keep doing this.’”

He admits that the approach he took in sharing his decision with his bandmates – two of them living abroad – was somewhat inappropriate. “I sent out an email, and I worded it stupidly – and I apologised,” he admits. “They got a little pissed off, so for 10 days we had a bit of a shit time . . . then I met Joey, and it was fine. So even though there’s still a few straggling things, we’re just great friends; they’re doing their thing and I’m doing mine.”

That said, Silverlake wasn’t strictly a solo endeavour. Walsh rekindled his old friendship with American musician/producer Jason Falkner, best known for his work with 1990s alt-poppers Jellyfish and as a session musician who has worked with the likes of Beck, Air and Brendan Benson. He first met Falkner in 1997 and, although he appeared on earlier Pugwash releases, it was the “ultimate dream” for Walsh to do a full album with him at his studio in Silver Lake, Los Angeles.

“I can’t stress enough how good he is – that’s why he’s worked with Paul McCartney, Beck, Glenn Campbell: ’ the greats,” Walsh says. “The album has this almost spiritual shininess to it. I’ve made so many albums that are dark around the edges; this [cover art] is a Disney drawing of me, because I’ve got this huge fan in Disney who drew me. I had all these different ideas for titles and artwork, but it was sunny, it was warm, it was fun, it was bright, so I just went ‘f**k it.’ I felt a bit more positive, I suppose.”

Although Walsh has had a taste of major league success in recent years as part of The Duckworth Lewis Method, his cricket-themed side project with Neil Hannon (and the reason for that aforementioned Ivor Novello nomination), he remains on the periphery, becoming accustomed to writing what he unfairly refers to as “elaborate flops”, despite being highly regarded as a songwriter by many of his peers.

“People say ‘That could have been this . . .’ or ‘This sounds so great . . .’ or ‘Oh, he loves your music?’ and ‘He’s on the album?’ – but we sell f**k all,” he grimaces. “Jeff Lynne, Ray Davies, Brian Wilson. I name them because I like to hear them sometimes, because it’s the only thing that keeps me going. This country is swarmed with talentless people running the scene.”

Still, he’s not quite ready to be resigned to cult status just yet. “I read a piece somewhere recently where I was described as a cult act, which is a first; it’s normally ‘quirky powerpoppers’,” he chuckles. “Now I’ve finally gotten to that age: but ‘cult’ isn’t good, because ‘cult’ means ‘living in your car in Los Angeles’. I think longevity is what to aim for.”

The dream is still alive with Silverlake, he says; all he needs is “Tesco or Super Valu to pick one of my songs, instead of this dire acoustic pain-in-the-hole bollocks they come out with every year. Use [his earlier song] It’s Nice to Be Nice to sell cars, I couldn’t give a shit. Send me some money so I can survive. It shouldn’t be such a struggle.”

He pauses, correcting himself. “No, let me change that. It should always be a struggle to be better, but it shouldn’t be a struggle to get a little bit of respect; an offer of a gig here and there, with a few quid involved.”

Even when you’re the architect of some top-class “quirky power-pop”, it seems that it can be easy to let self-doubt and animosity creep in. Walsh nods sombrely, but then brightens again. “But the negativity never wins,” he says, with a resolute shake of the head. “It’s palpable, but it never wins. Music usurps everything; it’s still a magical, glorious honour to be able to make music in some shape or form.”

Zoë Kravitz on High Fidelity: ‘A lot of white men who identified with the book think it’s theirs’
8

‘I have always believed that in our capitalist, consumerist society, we devour each other’
10