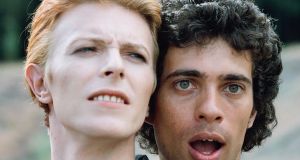 It was a conversation that would change Geoff MacCormack’s life forever. In 1973, MacCormack, a musician and childhood friend of David Bowie, got a phone call from the artist, then known as Ziggy Stardust, asking him to join an expanding lineup of his band, the Spiders From Mars.

MacCormack, who was selling advertising space for a London construction paper at the time, took him up on the offer and set off on a three-year tour in which he played in various iterations of Bowie’s backing band and, crucially, took dozens of photographs.

The images MacCormack took are now being collated in an exhibition at Brighton Museum & Art Gallery, which features 60 shots he took as he travelled with Bowie around the world, including a stint on the Trans-Siberian Express.

MacCormack, who had no photography training, said: “Those holiday snaps, as I call them, are sometimes even better than the one where he looks wonderful and heroic, which in a lot of them he does. They’re holiday snaps really.”

MacCormack, who ditched his Kodak Instamatic camera for a Nikkormat camera, which the Japanese photographer Masayoshi Sukita acquired for him, captured intimate images of Bowie as the singer entered one of his most creative periods.

Their time together spanned world tours and the five albums he released, from Aladdin Sane in 1973 to Station to Station in 1976, as Bowie became an international star and one of the most recognisable people on the planet.

There are images of Bowie as Ziggy Stardust in the Hammersmith Odeon dressing room calmly reading a review minutes before going on stage, clowning around on the Trans-Siberian Express and moments in between when he embarked on a film career.

For MacCormack the best images came from the period he spent with Bowie in Santa Fe in the United States, when he starred in Nicolas Roeg’s sci-fi classic The Man Who Fell to Earth. “You see in some of my photographs how well he looked and how happy he was,” MacCormack said. “It was just one of those idyllic situations and he was enjoying working on that film and he was clearly right for it and it was all going well. That was a really nice period.”

MacCormack, who is also known by his artistic name Warren Peace, would eventually leave to start his own songwriting company and continue his passion for photography. The only nagging regret he has is that he didn’t take more shots.

“Sometimes you say: ‘Oh, I wish I would have taken more pictures’. But I think it could have been irritating, and the attitude of the pictures would have changed,” he said. “It would have become a nuisance, rather than a sporadic thing where sometimes I had the camera, and sometimes I didn’t.”

The last time MacCormack saw Bowie was in 2013 after he travelled back from Cuba via the Bahamas and New York. But it was a trip to see the star in 2010 he cherishes, when the Icelandic ash cloud meant a short four-day trip turned into a two-week holiday with his friend in New York.

“We spent so much time with him and went to the theatre and even went bowling. That was a real bonus so that wasn’t just like an in-and-out, have dinner – we were able to spend days and days with him. That’s my last really great memory.” – Guardian

Relic: The creepiest horror movie of the year
9