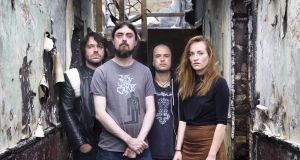 Lankum’s Between The Earth & Sky is the Choice Music Award Album of the Year for 2019.

Dublin trad group Lankum have won Album of the Year at the RTÉ Choice Music Prize Awards with their record, The Livelong Day.

Lankum were awarded a cheque for €10,000, which was provided by the Irish Music Rights Organisation and the Irish Recorded Music Association.

Westlife took home the Song of the Year for Hello My Love which was voted for by the public.

The band’s manager Cian Lawless accepted the award on stage for the band who told the crowd they were stuck on the side of a road in New York because their tour van had broken down en route to Washington.

Lawless described the decision by record label Rough Trade to sign a trad band as “a massive leap of faith”. “[Lankum] are the most fantastic people and they really live the tradition,” he added.

The Livelong Day was described in The Irish Times as “more like a soundtrack to a Jim Jarmusch film, with Tom Waits topping the bill” in which the band “march to the beat of their own tune too: in all its anarchic glory”.

Almost all of the acts nominated for Album of the Year performed at the Vicar Street event, except Girl Band, who were performing in London on the same day, and Lankum.

Alan Swan of RTÉ told the audience that 179 Irish albums have been submitted for the award. Past Album of the Year winners include O Emperor, Ships, Rusangano Family and The Gloaming.

The judging panel was made up of Irish music media professionals who chose the album behind closed doors in Dublin on Thursday night.

The ceremony was broadcasted live on the Tara Stewart show on RTÉ 2fm as Eoghan McDermott ran the show on the stage.

A highlights programme of the event will be screened on RTÉ2 television on Sunday, March 15th.

Even if Biden becomes president, there’s no turning back
3

Psychiatrist in the Chair: Delving into the great mind of Anthony Clare
5