Gig of the week: Electric Picnic 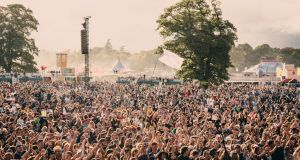 The Picnic is expanding its reach even further, and you can see that in the line-up

As much as the back-to-school ads mark the end of summer, Electric Picnic acts as the official closing ceremony for those who live and breathe for outdoor festivals. Even though the scorching hot temperatures have died down, this might be one of the first years in Stradbally where the late-night dwellers won’t clap their gloved hands together at 4am when the Salty Dog stage ends and declare “Jaysus! It’s Baltic”.

It’s our gig of the week, but after 14 years it’s still the event of the year for a lot of people. It is growing bigger each year – promoters expect to welcome 52,000 people through their gates – the Picnic is expanding its reach even further, and you can see that in the line-up. Instead of relying totally on rock or electronic acts to draw in the crowds, they’ve called in Kendrick Lamar and N.E.R.D to play the main stage, alongside old favourites Massive Attack and The Prodigy, and they’ve opened up the doors to more pop and R&B acts with chart titans Dua Lipa, Sigrid, Raye and Stefflon Don playing smaller stages across the weekend.

While a multitude of new festivals has swung into action this year, with Waterford’s All Together Now acting as a contender for the best new festival of the year, the draw of the Picnic can’t be dismissed. It was reported that 30,000 of this year’s tickets were sold before the line-up was even announced, willing to splash out in blind faith. And didn’t they deliver? Reading the line-up from top to bottom, there’s rarely a dip in quality of the acts. The addition of St Vincent and Peggy Gou is just delicious – and Irish performers are getting a huge boost on almost every stage. To name but a few, let the dark electronic of Bad Bones mesmerise you, the sharp observations of Kojaque impress you, the energy of Mango x Mathman rile you, the harmonies of Wyvern Lingo soothe you and let the effortlessly charming Soulé win you right over.

The influx of huge sponsored stages has been quite noticeable in recent years. You’ll see droves of people dancing outside vaping and fast food stages with some unknown DJ, but if you wander away from the main area, you can find some quiet space for new musical discoveries or some old-fashioned devilment. Make sure you hit up the Other Voices stage at some point for an intimate gig from the likes of Dowry, David Kitt and Stella Donnelly, go explore the many colourful nooks and crannies of the Body & Soul arena or get lost in the Trailer Park for what might feel like 10 years but is really a few hours.

Although it’s now totally sold-out, there will be a scramble for tickets in the coming weeks. A tale as old as time, people often decide to write off Electric Picnic, saying that it is too big (it is), it’s too busy (it is) and that the line-up is useless (excuse me?) but as soon as the end of August lingers over us, those same people eat their words in the quest for a freebie or a spare ticket. We’ve all been there. There’s no shame in being a festival hypocrite. With not long to go, the final stage times will be released exclusively on irishtimes.com, starting on Monday 27th.