From Quebec with love: This week’s traditional highlights 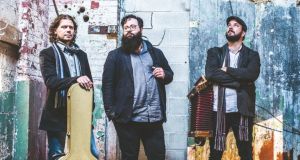 High-octane Québécois group who mix honky-tonk tunes with a canny sense of humour. Guitar, mandolin, bouzouki, fiddle, accordion, harmonica, jaw harp and vocals coalesce to conjure some fiery sounds. Tonight is the opening date on their extensive Music Network tour, from Dublin to Dingle and well beyond.

The ever-evolving, ever-curious Waterford singer is joined by Beoga’s Niamh Dunne and Seán Óg Graham and concertina player Niall Vallely for this concert. Having established her reputation as a member of Solas for four years, Casey has forged a highly successful solo career and, of late, has been a pivotal force behind the Fair Plé movement. She’s also recently been busy writing and premiering her own one-woman theatre piece in UL, directed by Olwen Fouéré.