'The Marriage of Figaro' and the redemptive power of love

Director Patrick Mason on getting to the heart of Mozart’s ‘The Marriage of Figaro’, Irish National Opera’s new production 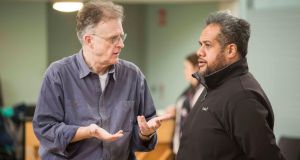 Getting an interview with him turned out to be a bit more complicated, though not through any fault of his. He answered questions in a thoughtful, painstakingly-detailed, knowledgeable, persuasive way. He reached back into theatre history as well as the world of opera. He spoke openly about the impossible as well as the possible. And he delivered structured sentences with an ease that any impromptu speaker anywhere would have to envy.

The problem was that when I got back  home, the file containing his words was nowhere to be found on the recording device. Even when I sourced software to scour out files that might be hard to locate in the shadows of the digital underworld it could not be found. So I had to go through the embarrassment of rescheduling the interview.

It turned out to be an illuminating experience, because, as I discovered, Mason doesn’t really repeat himself. Yes. Of course there were general points in common. But there were details that were new, as well as tranches of thoughtful musings that were left out completely the second time around.

My main line of enquiry was about how he approaches a work as well-known and often presented as Figaro. The opera has never been out of favour since it was first performed in Vienna’s Burgtheater in 1786, and it seems to have a perfection that has frightened off any imitators. Unlike The Barber of Seville, the other Beaumarchais-based opera subject, Figaro has never been set by any other composer.

“You start with the record of the event,” says Mason, “which is the libretto and the score.” And then you’re faced with what he calls the hardest question in the world to answer. “What is of the essence? What is the uniqueness of this piece? What sets it apart from any other piece?”

“A great hero of mine,” he continues, “Peter Brook, one of the greatest directors of the 20th century, said to me once, ‘You must look for the heart of the piece.’ That is not just an intellectual analysis, it is also a psychological and emotional process, and it’s also about letting your instincts lead you towards that heart.”

It’s not just a matter of comprehension, he says, “though that as well, particularly when you’re working in a language which is not your own language, like Italian. And also working with music, where I’ve been very fortunate that the conductor Peter Whelan is a terrific musician and a very articulate musician, as well. It was a wonderful experience working through the score with him.”

This reminds me of a musical quiz I heard once on BBC Radio 3, where the contestants, concert performers and conductors, were played parts of pieces – concertos without the solo part and the like – and asked to identify them.  One of the examples was an excerpt from Mozart’s Clarinet Quintet, minus the clarinet part. And, true to Mason’s point, it sounded absolutely complete, as if nothing were missing.

He’s absolutely clear about where the essence of Figaro is to be found. “There’s a line right at the end of the opera where, magically and miraculously, this day of folly and torment and bad behaviour is turned into a celebration of joy.”

Count Almaviva in the opera is, in today’s parlance, a sexual predator. He lusts after Susanna, his wife’s maid. At the same time he harbours suspicions about the fidelity of Countess Almaviva, which he is prepared to indulge as fully as his pursuit of Susanna. Yet at the end of the opera everything is set right.

“How on earth could that happen? And they all say, only love could have done this. There’s only one power in the world that could have saved us all from disaster. And that is love. Mozart sets it with some of his most breathtaking music. It’s expressed beautifully. And you realise, here’s the heart of the piece, that there is this tremendous desire, tremendous yearning for the redemptive power of love, in human life, in human affairs, in the individual, in relationships, but also in society, in the community.”

“The other thing you’ll find through the libretto and in Mozart himself,” he says, “is this constant awareness of la commedia. What’s this comedy? Let’s finish the comedy. Let’s finish the business with the wedding. Let’s have a proper comedy.

Energy, for Mason, is also at the heart of the piece. “All performance is energy. But it’s a particular kind of energy that must encompass all the folly, all the bad behaviour, all the nonsense that goes on – and there’s a lot. But it all comes together. Why? Because the power of love is potentially greater than all those things.”

“The Emperor Joseph in Austria is trying to rein in the worst effects of the ancien régime, of the aristocrats. He’s trying to open up society, a bit – he still wants to be Emperor. There’s a flourishing middle class interested, as Mozart was, in movements like freemasonry.”

So, he says, “it’s not just individual love, though obviously the opera is about a great love affair, between Susanna and Figaro, and a kind of failed love affair between the Count and Countess. But it’s also about oiling the wheels of society. If you have abuse of power, if you have this appalling behaviour of the empowered, if you have this sexual harassment going on, there’s something dysfunctional. There’s a lot of anger and resentment in the opera.”

Anger, of course, only takes you so far. “What is the power than can change that, that will hold society together, that will also give a society a sense of equality, of justice?”

The whole issue of the feudal right in Beaumarchais and in the opera is “a metaphor for abusive power”. The question, says Mason, is how do you reform society without provoking a revolution? “Mozart and Da Ponte are caught up in that. It’s not just an individual thing, it’s a communal action as well. For all the individuality there’s an overriding social and political concern.”