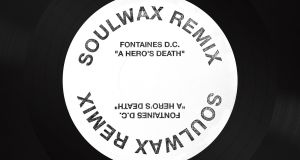 In a year in which a terrible hush drowned out everything else, Fontaines DC’s A Hero’s Death provided a rare reason to the cheerful. The Dublin five-piece’s second album came out last July – that phoney moment of high summer when it almost felt the pandemic had gone away.

The world has shut down since then but now Fontaines DC are opening up. A remix of A Hero’s Death by Belgian DJs and producers Soulwax – aka brothers David and Stephen Dewaele – has just been released and gives the Dubliners a glittering retro-electro makeover.

“Life Ain’t Always Empty,” intones singer Grian Chatten in something between a chant and a growl. As he does, the Dewaeles’ grooves crank up the tensions that burbled just under the skin of the guitar-driven original recording.

Amidst the garage-rock clatter, Fontaines were always more than just another rag-tag of indie urchins. Here, thanks to Soulwax, they are reborn as punk-funk disconauts. And, apart from a bit in the middle where it threatens to turn into Domino Dancing by the Pet Shop Boys, the results are cracking.

“Whatever the part of the brain is that sparks the idea for a remix when you hear a great song, even though it doesn’t always work, it was definitely fully functional when we heard A Hero’s Death,” Soulwax said as they announced the release.

Soulwax are perhaps best known for 2003’s As Heard On Radio Soulwax Pt. 2, where, under the alias of 2ManyDJs, they pioneered of the short-lived milieu of musical mashup. Mashup was one those ideas that sounded fantastic in the early years of the new millennium but which would date worse than Rudebox-era Robbie Williams.

The big conceit was that you took a refrain from one song – the guitar from The Breeders’ Cannonball, say. And then you counterintuitively lassoed it to something like My Gigolo by Maurice Fulton presents Stress. The concept was usually better than the execution.

The revamp of A Hero’s Death is nothing like that. It’s lean and clean-burning. But might it provide a hint, too, of what the future holds for Fontaines DC themselves? When making A Hero’s Death they wisely dialled down the “Dublin in the rain” component of their debut album, Dogrel.

Not that there is anything wrong with a record as rooted in a specific time and place as is Dogrel. More that, it’s always better to move on than repeat yourself. Perhaps an electronic element is the obvious next step – Fontaines DC going slightly LCD Soundsystem.

In the immediate term, they will look forward to the Grammys, where they vie for Best Rock Album with The Strokes, Sturgill Simpson, Grace Potter and Michael Kiwanuka. The ceremony takes place on March 31st (having been shunted – for obvious reasons – from late January).

The band have also started on their next record, for which they have already reportedly recorded 11 demos. Speaking to Spanish publication Binaural, guitarist Carlos O’Connell revealed the new material sounded “very 1990s” and offered as a point of comparison Sinéad O’Connor, Pixies and Prodigy.

Firestarter meets Mandinka with a splash of River Euphrates sounds … erm, great actually. And certainly worth holding on until next year for. In the meantime, and before the Grammys, fans can marvel at how the banging new Soulwax remix breaths fresh life into A Hero’s Death.

A Hero’s Death can be streamed now. The track will be released on vinyl on February 12th, limited to 1,000 copies