Mary McPartlan: ‘The pain and sorrows of emigration are so rooted in our songs’ 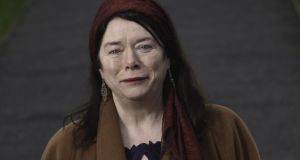 Songs have passports all of their own, and our traditional song store has travelled widely.

It has crossed the Atlantic and evolved in the belly of Appalachia, colouring the music of everyone from Kentucky song collector and singer Jean Ritchie to the Everly Brothers and Dolly Parton. Bringing It All Back Home, Philip King’s seminal 1991 TV series, captured the essence of that transmission and translation of our tradition.

More recently, Leitrim singer and Fulbright scholar Mary McPartlan has turned to Kentucky, and to Ritchie, a fellow Fulbright alumnus.

“A singer will always be song-searching and song-catching,” says McPartlan as she reflects on what drew her to the mountains of eastern Kentucky and Ritchie’s kitchen table. “I became aware of Jean Ritchie 20 years ago and I was always very taken by her lyrics. I really liked the way she interpreted a song and how she worked with the lyrics, shaping them in her way, the emotional expression that was coming from them.”

The fruit of McPartlan’s meetings with Ritchie (cemented by time spent as a visiting lecturer on traditional song in New York University) can be found in her latest album, From Mountain to Mountain. Shot through with the recurrent themes of kinship, mountains and of mining, it’s a collection that gives lie to the notion of traditional and folk music being predictable.

McPartlan’s collaboration with African-American jazz pianist Bertha Hope resulted in a further morphing of songs from Ritchie, Bess Cronin and Margaret Barry, among others.

“The people of Appalachia were locked in, in terms of their poverty and their struggles,” McPartlan says. “I saw clearly that my own background in Leitrim was no different. It was all about the economics of survival. For the people of Appalachia, where the settlers came from everywhere, the richness that they had was this massive tradition, and the handing down of that tradition through the Ritchie family. They were the academics of the mountains.”

Musically, Leitrim is most closely associated with flute and fiddle playing. McPartlan brought her love of song from her mother, a native of Tyrone, where songs hold sway. McPartlan belongs to generation emigration, but she was determined not to follow her siblings on those lonesome paths.

“I saw how the pain and sorrows of emigration are so rooted in our songs and art forms. In Galway I began to see how sean nós singing has much more in common with the singing of Appalachia, which is all about handing down through the generations. I have two aunts and my mother, all over 80, and they’ll sit side by side, and just sing. It’s part of their daily lives. There’s a song for every aspect of your life, whether it’s cleaning, scrubbing, rowing, sowing, or a baby being born . . .”

On From Mountain to Mountain, Sligo guitarist and fiddler Séamie O’Dowd, Tyrone fiddler Cathal Hayden and co-conspirator Máirtín O’Connor embrace the music McPartlan brought back with her from her recording sessions in New York, fusing it with their sense of mountain music. And so Bess Cronin’s How Can I Live at the Top of a Mountain is bathed in an Appalachian fiddle sound that’s equal parts eastern Kentucky, Delta Blues and south Sligo.

“That was when I realised how strong folk songs are, what’s inbuilt in them, that they can sound very simplistic at one level, but when you stretch and open them up, there’s all this profundity, and possibility. Folk music is such a complex thing in itself,” says McPartlan.

She was spellbound when O’Dowd, her coproducer, burrowed beneath the skin of the music she had made with Hope in New York. “Suddenly there was a merging of histories, of musicians, creating this wonderful new warm, inviting, rhythmic sound of Irish traditional, folk blues with Bertha Hope’s jazz music, which she is steeped in. On The Month of January, Bertha is improvising and Cathal Hayden and Séamie O’Dowd bring her back. Séamie reaches around her music to hold it together in another rhythm. It’s so beautiful.”

Differences arose in the diversity of cultural responses to life’s sorrows and woes.

“Bertha used to ask me, ‘Mary, what’s wrong with all these people? Why are they putting up with such misery?’ and so, I’d ask her the same thing about all those blues mamas. And she said, ‘Well, at least they just went out and got another man. Your crowd go off and kill themselves.’ ”

Jon Pickow, Jean Ritchie’s son, came to Ireland for the recent launch of the album. “Meeting Sarah Makem and all the singers here forever changed my mother’s singing,” he says. “She was deeply influenced by them, and I think it’s very fitting that Mary incorporated all of her influences on this album. When my mother came to Ireland, it was like coming home for her. Sitting around with the elders and learning music from them was how she grew up.”

McPartlan’s musical journey continues. “My own deepest quest is African-American music. I’m still on that journey. I absolutely knew that I was following a path. I’m an experimental innovator anyway, and I knew I had to start that process. I don’t yet know where it’s going to lead me, but I’m on my way.”