Fleetwood Mac in Dublin: ‘We’re a bunch of crazy people with a crazy history’ 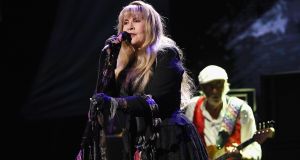 Stevie Nicks: At 27 she thought she was old, she tells the crowd. Now she’s 71 and feels she’s got so much more to give. Photograph: Kevin Mazur/Getty Images

Emerging from backstage, they come in hard with The Chain, a song that drums up fervour even if it’s just on a mid-afternoon repeat of Top Gear on Dave.

Immediately, Fleetwood’s facial expressions become a star in their own right, beaming as he cues in the always thrilling break of The Chain. In the unseasonably cold June breeze, the ribbons draped on Nicks’s mic stand and tambourine billow during Dreams, as does her long, honey blonde hair, building up her air of being the true witch supreme.

Her husky voice hits the same soft purrs she’s been hitting ever since she joined the band, a timeless icon. Batting the chorus of Second Hand News back and forth with Finn, there’s a warmth between them that was vaguely absent from their last visit to Dublin with Buckingham in 2015.

Retrieving Black Magic Woman from the archives, there’s a distinct playfulness between Nicks and Christine McVie as Christine wraps a scarf around her friend’s shoulders. This time, says Nicks, we “Sing it through the eyes of the woman ... so that’s me and Chris”.

Passing on the good karma, Campbell takes off his hat in appreciation of Christine’s work on the keyboard. And in general, there’s a reverence for the ever silent John and a universal adoration of the larger than life Fleetwood, who shows more than a glint of madness during his 10-minute long drum solo, shouting out things like “hanky panky!” and “unleash the hounds!”.

It’s almost like they’re telling no one in particular and the entire world at once that it’s nice to play nice.

Historically, the group has a revolving door policy with members coming, going or getting fired due to: affairs, divorces, drunken brawls, break-ups, make-ups, creative differences, dalliances with the Children of God cult, drug abuse or health issues.

The core set though, consists of Nicks, the McVies, Fleetwood and Buckingham, who stuck together for a winning streak between 1974 and 1987, releasing the seminal Rumours and Tusk albums during this period. Their capacity to work together continued to fluctuate over the years.

A two-year touring stint reunited them in 1996, until Christine decided to step away from the public eye. Sixteen years later, she rejoined the group and the five-piece had a four-year run of touring until Buckingham was fired – although Mac says that’s too ugly a word to use – for a plethora of allegations, including smirking at Nicks during a thank-you speech at an awards ceremony. He also refusing to sign off on a tour that they’d been planning for over a year, which led to Buckingham filing a lawsuit against the group for breach of oral contract.

It’s not easy carrying the burden of being a rock star, is it? So with Buckingham out, Finn and Campbell fill his boots instead, and with these welcome additions onstage, Crowded House’s Don’t Dream It’s Over sneaks onto the setlist and Nicks takes the lead on Free Fallin’, an emotional tribute to Campbell’s former bandmate and friend Tom Petty.

Fleetwood Mac’s music transcends generations. Everywhere is a borderless anthem that can be played at a wedding, in Coppers, the Róisín Dubh and the queer night club Mother and it will always incite the same rush to the dance floor.

Landslide, written by Nicks, is a breathtaking song and as she says herself, she wrote this song at 27 when she thought she was old but now that she’s 71, she feels like she’s got so much more to give. The show ends with Don’t Stop, a song that Christine wrote in 1976 about her separation from John after eight years of marriage.

As they take their final applause, grinning through the happiness and the turmoil that each song represents, there’s no better example of “the show must go on” than Fleetwood Mac.

“We’re a bunch of crazy people with a crazy history,” says Fleetwood, getting the last word in, “but it’s nights like this that give us life’s breath”.